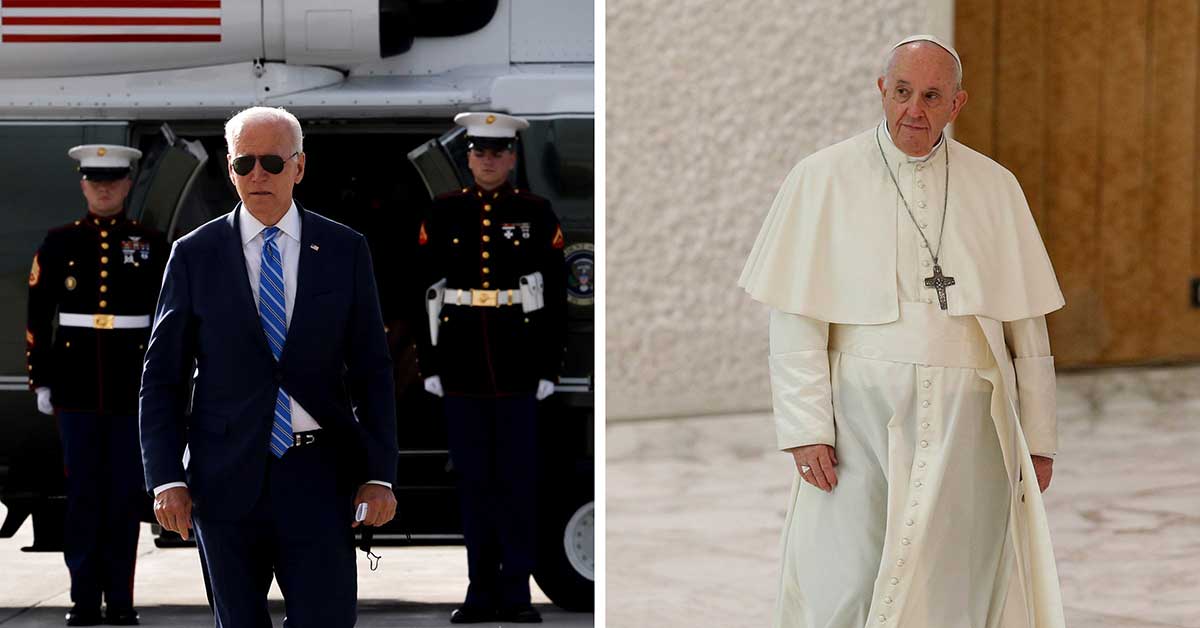 President Joe Biden and Pope Francis are seen in this composite photo. The White House announced Oct. 14, 20201, that the two will meet at the Vatican on Oct. 29. (CNS composite; photos by Jonathan Ernst, Reuters, and Paul Haring)

By Carol Zimmermann – President Joe Biden and first lady Jill Biden will have an audience with Pope Francis on October 29, the day before the G20 Leaders’ Summit starts in Rome.

“They will discuss working together on efforts grounded in respect for fundamental human dignity, including ending the COVID-19 pandemic, tackling the climate crisis and caring for the poor,” she said in a statement.

Biden and Pope Francis previously met in 2016, when Biden was vice president, after they both spoke at a conference on adult stem-cell research at the Vatican.

In recent weeks, there has been speculation that the two leaders would likely meet since Biden would be in Rome.

In a recent interview with Catholic News Service, Archbishop Christophe Pierre, apostolic nuncio to the United States, said he was helping the Holy See prepare for Biden’s first presidential visit to the Vatican, sometime during an Oct. 30-31 Rome summit of leading rich and developed nations.

“It would be an anomaly if he did not meet the pope while in Rome,” especially since Biden is the first Catholic to be U.S. president in 58 years, the nuncio said.

On Oct. 9, the pope met privately at the Vatican with U.S. House Speaker Nancy Pelosi, who was in Rome to speak at a meeting of legislators from around the world in preparation for the U.N. climate summit.

Pelosi, who is Catholic, said in a statement that it was “a spiritual, personal and official honour” to have an audience with the pope.

Because Pelosi supports legalised abortion, her archbishop, Archbishop Salvatore J. Cordileone of San Francisco, asked “all Catholics and others of goodwill” to join a prayer and fasting campaign for Pelosi’s “conversion.”

In her keynote address to fellow legislators from around the world meeting in Rome on Oct. 8, Pelosi said world governments must take bold action in their own countries and when they meet for COP26 in Glasgow, Scotland, in November.

The pope, who addressed the Pre-COP26 Parliamentary Meeting the next day, spoke of the “important, and indeed, crucial” role of governments in slowing climate change and restoring a healthy environment.

After the G20 Leaders’ Summit in Rome, which ends Oct. 31, Biden will travel to Glasgow, to take part in the Nov. 1-2 World Leader Summit at the start of the climate change gathering.

Pope Francis, who initially planned to attend the COP26 summit, will not be attending. The Holy See delegation will be led by Cardinal Pietro Parolin, Vatican secretary of state.

Tags: Church in the USA