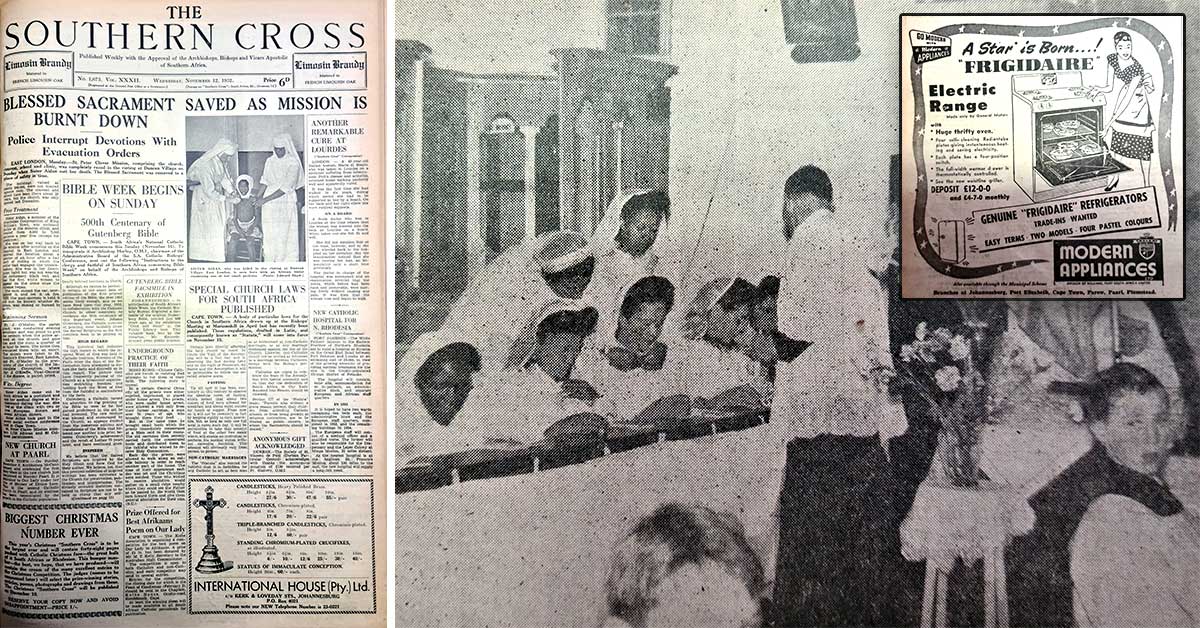 Left: Cover of the Southern Cross 12 November 1952. Right: Candidates for the Children of Mary are enrolled by Fr Frederick Cole at Bl Oliver Plunkett church in South End, Port Elizabeth.  [The church closed in 1970.] (Photo by P Chinnian). Inset: An advert for the latest kitchen appliances.

Dominican Sister Aidan Quinlan, featured on the front-page photo, was murdered by a mob and St Peter Claver mission in Duncan Village in East London was completely razed during riots. The buildings, including a new church, were not insured. [See the story by Mignonne Breier, whose new book Bloody Sunday gives a full account of the events that day.]

New regulations drawn up by the bishops of Southern Africa will take effect on November 15. Among these, the fast during Lent and the vigils of Pentecost, All Saints and the Assumption will be relaxed from its previous rigidity of one main meal of 230g and two of 60g. Now it is permissible to eat one full meal and two small meals “which enable an individual to perform his normal duties without excessive hardship”.

Other new regulations forbid Catholics to act as best man or bridesmaid at non-Catholic marriages, or non-Catholics to do so at Catholic weddings; and parents who don’t send their children to Catholic school or catechism without sufficient reason shall be regarded as public sinners and denied the sacraments.

Bible Week to be launched

To mark the 500th anniversary of the first printed Bible being produced by Johannes Gutenberg in Mainz, Germany, the bishops of South Africa have declared a Bible Week, starting on Sunday, November 18.