Pope: Catholic and Orthodox Must Make their Communion Visible 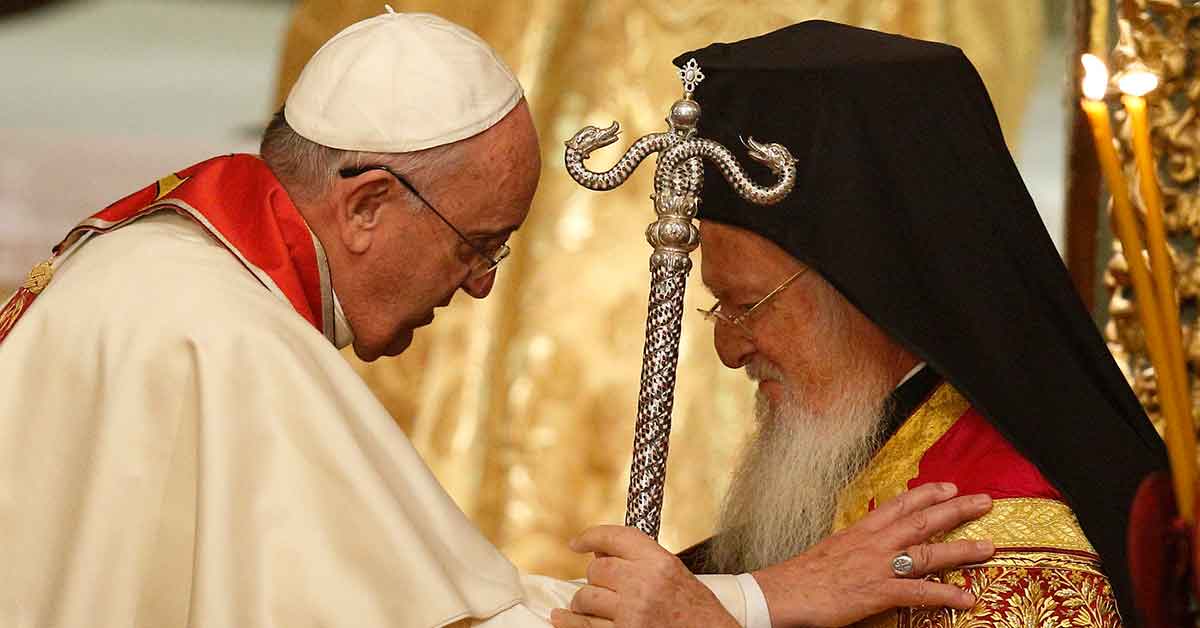 Pope Francis and Ecumenical Patriarch Bartholomew of Constantinople embrace during a prayer service in the patriarchal Church of St. George in Istanbul in this Nov. 29, 2014, file photo. The pope sent a message to Patriarch Bartholomew on the feast of St. Andrew, patron saint of the church of Constantinople and the Ecumenical Patriarchate. (CNS photo/Paul Haring)

By Carol Glatz – Catholics and Orthodox Christians must increasingly work together where they can, Pope Francis told Ecumenical Patriarch Bartholomew of Constantinople.

“The full unity for which we yearn is, of course, a gift from God, through the grace of the Holy Spirit. May our Lord help us to be ready to embrace this gift through prayer, interior conversion and openness to seeking and offering pardon,” he said in the written message to the Orthodox patriarch.

“Beloved brother in Christ, along the path toward full communion between our churches, we are sustained by the intercession of the holy brothers Peter and Andrew, our patron saints,” he wrote in the message released by the Vatican Nov. 30.

Cardinal Kurt Koch, president of the Pontifical Council for Promoting Christian Unity, delivered the message to the patriarch in Istanbul Nov. 30 during services to mark the feast of St. Andrew the Apostle, the patriarchate’s patron saint. The cardinal led a Vatican delegation to Istanbul to take part in the Divine Liturgy presided over by the patriarch.

Pope Francis told the patriarch, “It was a source of joy for me that during your recent visit to Rome we were able not only to share our concerns regarding the present and future of our world but also to express our shared commitment to addressing issues of crucial significance for our whole human family, including the care of creation, the education of future generations, dialogue among the different religious traditions and the pursuit of peace.”

This way, as pastors with their churches, they strengthen a “profound bond that already unites us, since our common responsibility in the face of current challenges flows from our shared faith” in God the father, his son and the Holy Spirit, “who harmonizes differences without abolishing them,” the pope wrote.

“United in this faith, let us seek with determination to make visible our communion,” he wrote.

Even though there are still “theological and ecclesiological questions at the heart of the work of our ongoing theological dialogue, it is my hope that Catholics and Orthodox may increasingly work together in those areas in which it is not only possible, but indeed imperative that we do so,” the pope wrote.