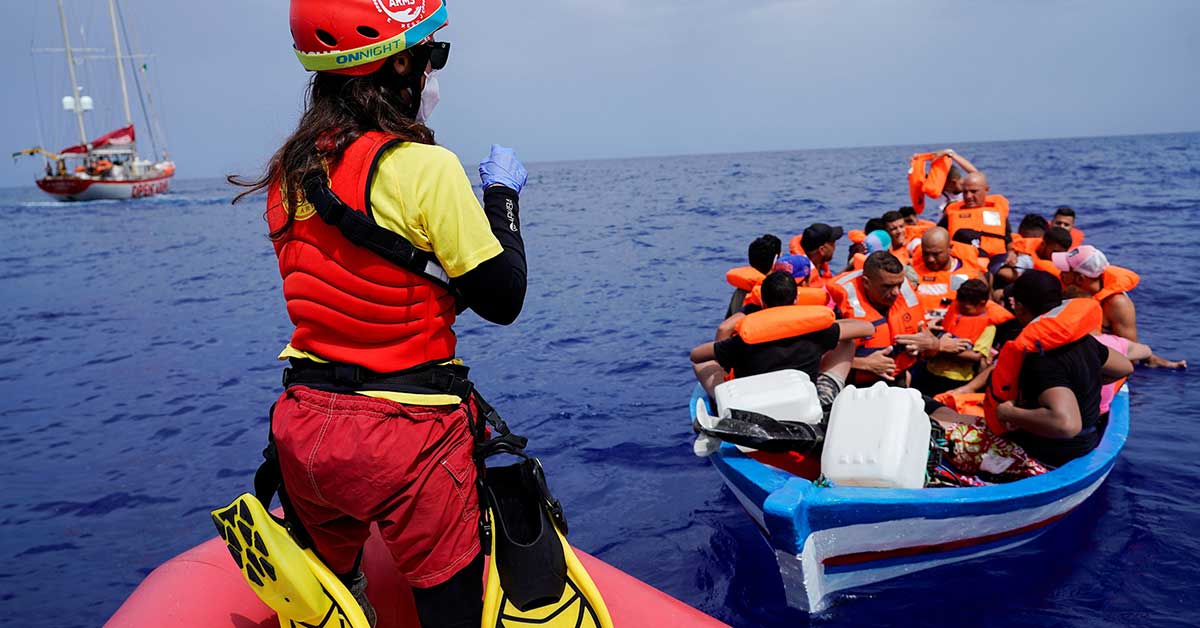 A crew member of the NGO Proactiva Open Arms rescue boat Astral gives instructions to migrants on a wooden boat near the island of Lampedusa, Italy, on Sept. 1, 2021. Migrants are a blessing and a gift for society and the church, but they must be helped to integrate into communities, Pope Francis said in a talk on November 11. (CNS photo/Juan Medina, Reuters)

By Carol Glatz –  Migrants are a blessing and a gift for society and the church, but they must be helped to integrate into these communities, Pope Francis said.

“Welcoming, accompanying, promoting and integrating, these are the four steps” that must be taken in response to newcomers, he said in a talk on November 11.

“If we don’t get to integration, there can be problems and serious ones,” he said, recalling the terrorist bombings in Brussels in 2016 that left more than 300 people injured and 35 people dead, including the three perpetrators, who were Belgian nationals.

Those carrying out the attacks “were Belgian, but were children of migrants who were not integrated, they were ghettoised. Therefore, welcoming, accompanying, promoting and integrating” are needed, he said.

The pope’s remarks came in a speech to people taking part in a European congress on Italian Catholic missions, sponsored by the Italian bishops’ Migrantes foundation, which offers pastoral care to Italian migrants. The November 9-12 congress was dedicated to the topic, “Italians in Europe and the Christian mission: Roots that do not break, but extend to embrace everyone encountered.”

Mentioning how his ancestors were Italians who immigrated to Argentina, the pope said migrants are not “others” or strangers but are a significant part of “us.”

Italian migrants help foster a sense of a united Europe, celebrating diversity built on common roots, he said. “It is a beautiful mosaic that should not be disfigured or spoiled by prejudice or that veiled hatred of self-righteousness. Europe is called today to revitalise its vocation of solidarity in subsidiarity.”

Migrants are not only “a blessing, a source of enrichment and new gift that encourages a society to grow,” they are also “a blessing for and in the church,” he said.

When newcomers are integrated in the church community, “they can help breathe the air of diversity that regenerates unity; they can nourish the nature of catholicity … they can generate stories of holiness,” he said.