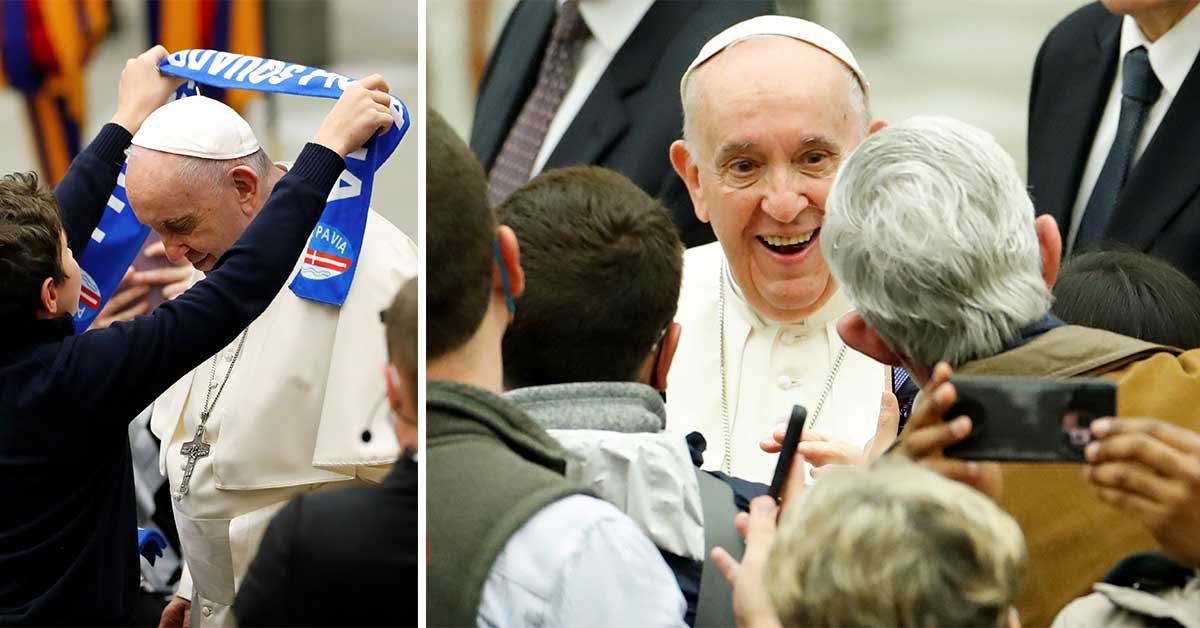 St Joseph is a man full of faith in God and his providence, the pope said Nov. 17 at his weekly general audience in the Vatican’s Paul VI hall.

The saint also “reminds the church to keep her eyes on what the world deliberately ignores” and to consider as important what others discard, he said.

“He is truly a master of the essential: He reminds us that what truly matters does not attract our attention, but requires patient discernment to be discovered and appreciated,” he added.

The day’s audience talk was the first of a new series of talks dedicated to the foster father of Jesus and husband of Mary.

Pope Francis had proclaimed a “Year of St Joseph” from Dec. 8, 2020, to Dec. 8, 2021, to mark the 150th anniversary of the declaration of St Joseph as patron of the universal church. The saint is held up as an example of sacrificial fatherhood and purity and as an intercessor in healing and fighting the world’s evils.

In his audience talk, the pope explained that he wanted to dedicate a series of talks to St. Joseph in addition to his reflections on the saint contained in his 2020 apostolic letter, “Patris Corde” (“With a father’s heart”), in the hope of helping people “be enlightened by his example and by his witness.”

“Never like before, today, in this time marked by a global crisis,” the pope said, “can he offer us support, consolation and guidance.”

The name Joseph, which comes from the Hebrew verb, “to increase,” signifies “may God increase, may God give growth,” he said.

His name reveals an essential aspect of St Joseph’s character: “He is a man full of faith in God, in his providence,” and everything he does indicates his certainty that God helps things grow, that God increases and adds, Pope Francis said.

Another important aspect is St Joseph’s connection with Bethlehem, where Jesus is born, and Nazareth, where he settles and supports his family as a carpenter.

Even though Jerusalem was the city loved by the Lord, “the Son of God did not choose Jerusalem as the place of his incarnation, but Bethlehem and Nazareth, two outlying villages, far from the clamour of the news and the powers of the time,” the pope said.

“This is why the choice of Bethlehem and Nazareth tells us that the periphery and marginality are preferred by God,” he said, and “to fail to take this fact seriously is equivalent to not taking seriously the Gospel and the work of God, who continues to manifest himself in the geographical and existential peripheries.”

Even though the “doctors of the law” scolded Jesus for this, Jesus goes out in search of sinners, going into their homes, speaking and eating with them, calling them to conversion, the pope said.

But Jesus also goes in search of “those who have done no evil, but have suffered it: the sick, the hungry, the poor, the least,” he added.

There is a centre and a periphery – in society and in the human heart and soul, Pope Francis said. People should draw confidence from knowing that Jesus “knows the peripheries of our heart, of our soul,” of one’s community or family and knows those “places that are a bit dark, that we don’t let people see, perhaps out of shame.”

Jesus always acts quietly, out of the limelight in these far corners, “and the church knows that she is called to proclaim the good news from the periphery,” he said.

St Joseph, “who is a carpenter from Nazareth and who trusts in God’s plan for his young fiancee and for himself,” reminds the church “not to look so much at the things the world praises,” but to keep her eyes on those peripheries and dark corners, he said.

The pope also offered a special prayer and message to “all the men and women who live in the most forgotten geographical peripheries of the world or who experience situations of existential marginalisation.”

“May you find in St Joseph the witness and protector to look to,” he said, offering the following prayer:

“St Joseph, you who have always trusted God and have made your choices guided by his providence, teach us not to count so much on our own plans but on his plan of love. You who come from the peripheries, help us to convert our gaze and to prefer what the world discards and marginalises. Comfort those who feel alone and support those who work silently to defend life and human dignity. Amen.”