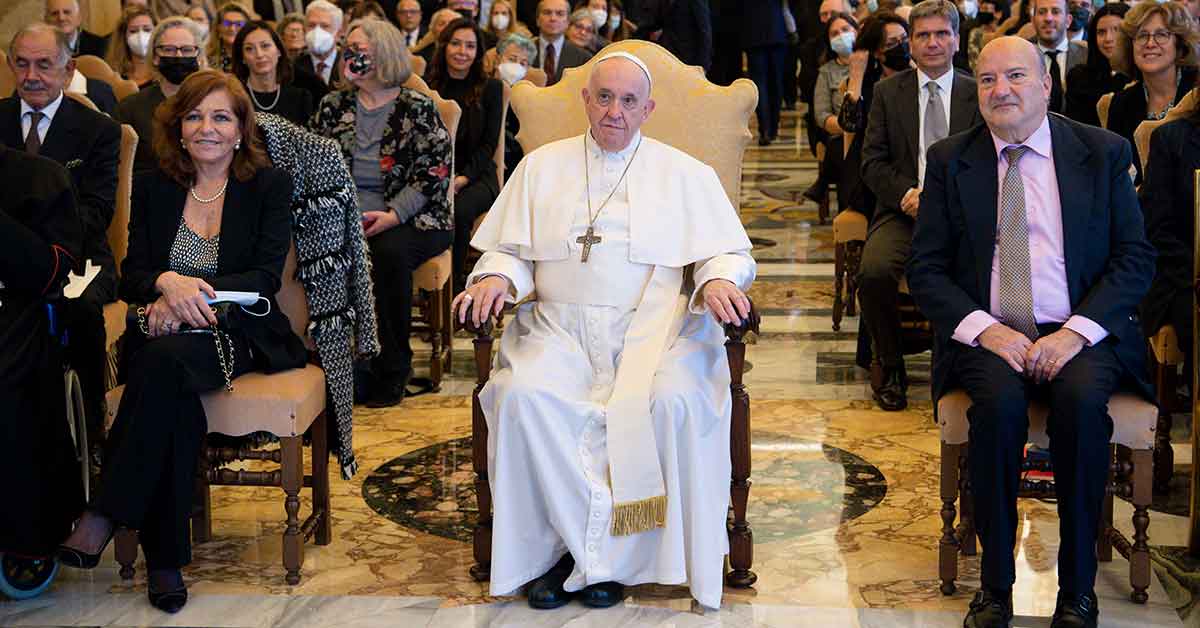 Pope Francis is seated next to Valentina Alazrak of Televisa and Philip Pullella of Reuters during a ceremony to honour the two journalists in the Apostolic Palace at the Vatican Oct. 13, 2021. The pope conferred on the journalists the grand cross of the Order of Pope Pius IX, the highest papal honour bestowed on laypeople who are not heads of state. Both journalists have covered the Vatican for more than 40 years. (CNS photo/Vatican Media)

By Cindy Wooden – Honouring two reporters who have covered the Vatican for more than 40 years, Pope Francis paid tribute to all journalists who work to explain what is going on in the world and “make it less obscure.”

Addressing the honourees, Philip Pullella of Reuters and Valentina Alazraki of Televisa, and their colleagues on November 13, Pope Francis said, “I also thank you for what you tell us about what is wrong in the church, for helping us not to hide it under the carpet and for the voice you have given to the victims of abuse. Thank you for this.”

During an audience in the Consistory Room of the Apostolic Palace, the pope conferred on the two the grand cross of the Order of Pope Pius IX, the highest papal honour bestowed on laypeople who are not heads of state.

“Today I want in some way to pay homage to your entire working community,” he said, and “to tell you that the pope loves you, follows you, esteems you, considers you precious.”

“Journalism is not so much a matter of choosing a profession, but rather of embarking on a mission, a bit like a doctor, who studies and works to cure evil in the world,” the pope said. “Your mission is to explain the world, to make it less obscure, to make those who live in it less afraid and to look at others with greater awareness.”

In a world where events are shared instantly and constantly, he said, it is important for journalists to pause, listen and “to study the contexts and precedents” of what is happening.

“The risk, as you well know, is to be overwhelmed by the news instead of being able to make sense of it,” he told the journalists.

“Listen, investigate and report” are the three verbs that characterise good journalism, the pope told them.

Listening and seeing go together, he said. A good news report requires attention not just to what people say but how they say it – something that requires time and is authentic only “if the journalist has listened and seen for him- or herself.”

Repeating what he had written in his message for World Communications Day, Pope Francis said the world needs “journalists who are willing to ‘wear out the soles of their shoes,’ to get out of the newsroom, to walk around the city, to meet people, to assess the situations in which we live in our time.”

Investigating, going deeper into an event and its context and implications is a service needed especially when snippets of information are so readily available and shared on social media, he said.

“You know very well that, even when it comes to information about the Holy See, not everything said is always ‘new’ or ‘revolutionary,'” the pope said, noting that in an address to popular movements in October he tried to explain how his pronouncements on poverty and migration and other issues are rooted in the long-developing social teaching of the church.

“Tradition and the magisterium continue and develop by facing the ever-new demands of the times in which we live and enlightening them with the Gospel,” he said.

To report or recount what has happened and why, the pope said, journalists should not make themselves the star of the story or the judge of an event, but they do have to allow themselves “to be struck and sometimes wounded” by the stories they encounter.

“Today we are in great need of journalists and communicators who are passionate about reality, capable of finding the treasures often hidden in the folds of our society and recounting them, allowing us to be impressed, to learn, to broaden our minds, to grasp aspects that we did not know before,” he said.

Pope Francis also asked reporters to remember that “the church is not a political organisation with left- and right-wingers, as is the case in parliaments. At times, unfortunately, our considerations are reduced to this, with some root in reality. But no, the church is not this.”

The church is not a company trying to sell a product, he insisted. “Every time she falls prey to this worldly temptation – and at times she falls, or has fallen — the church, without realising it, believes she has a light of her own,” rather than reflecting the light of Christ.