Pope: The Culture of Death Includes All Forms of Abuse 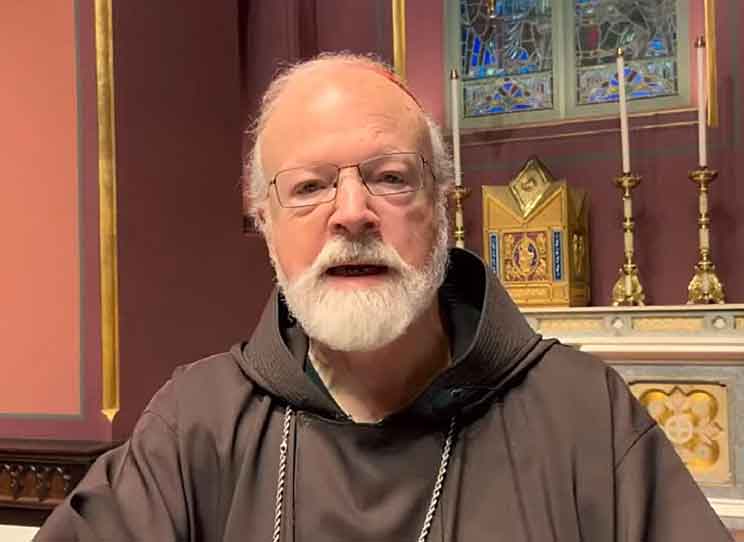 U.S. Cardinal Sean P. O’Malley, president of the Pontifical Commission for the Protection of Minors, is pictured taking part in a congress held online and onsite in Rome Nov. 4, 2021. The congress, dedicated to creating safe environments and promoting the safeguarding of minors during the COVID-19 pandemic and beyond, was sponsored by several Italian Catholic lay associations. (CNS screenshot/SAFE project)

By Carol Glatz –  Every form of abuse – sexual, psychological or an abuse of power – is part of “the culture of death” that needs to be eradicated through the conversion, education and the active participation of everyone, Pope Francis said.

“May the safeguarding of minors be an ever more concrete and regular priority in the church’s educational efforts and may it be promoted as a service that is open, reliable and authoritative” and aimed at combating “every form of domination, affronts to personal intimacy and complicit silence,” he said in a written message.

Guaranteeing safe environments for minors and vulnerable people is a journey that everyone in the church must embark on together, driven by “the sorrow and shame for not always having been good guardians protecting minors who are entrusted to our educational and social activities,” he wrote.

The pope’s message was sent to participants in a congress held online and onsite in Rome on Nov. 4.

The congress, dedicated to creating safe environments and promoting the safeguarding of minors during the COVID-19 pandemic and beyond, was sponsored by several Italian Catholic lay associations. The associations, which include the John XXIII Community, Catholic Action and the Catholic Italian Sports Center, have joined together for a project called “SAFE” for encouraging and helping church-based organisations in Italy adopt and follow child protection policies.

In his message, which was read aloud during the congress, the pope repeated an appeal from his “Letter to the people of God” in 2018, saying “no effort must be spared to create a culture able to prevent such situations (of sexual abuse, the abuse of power and the abuse of conscience) from happening, but also to prevent the possibility of their being covered up and perpetuated.”

He said these efforts must involve every member of the church and require a “process of conversion” and urgently needed “renewed formation” of all those who are involved in education or work with minors in the church, in the community and in the family.

Only through coordinated and “systematic” efforts in an alliance aimed at prevention, he said, “will it be possible to eradicate the culture of death, which is the herald of every form of abuse – sexual, of conscience and of power.”

“If abuse is an act of a betrayal of trust that is a death sentence for those who experience it and creates profound fissures in the context where it happens, prevention must be a permanent path of promoting an ever-renewed and assured reliability toward life and the future, which minors must be able to count on,” Pope Francis wrote.

Adults must rediscover their vocation as faithful “artisans in education,” which means working with those they teach in ways that encourage their talents, respect their limits, freedom and dignity, and avoids the temptation “to seduce or lure, which only in appearance can facilitate relations with younger generations,” he wrote.

Pope Francis encouraged young people to play a greater role in these efforts, noting they would be important in recognising and flagging where there are risks and in reminding people of their responsibility in safeguarding.

U.S. Cardinal Seán P. O’Malley of Boston, president of the Pontifical Commission for the Protection of Minors, was one of the conference speakers and delivered his remarks online.

He praised the lay Catholic associations promoting the “SAFE” project, noting their groups work in “almost every area of the lives of children and young people today: in their homes, schools, recreational activities and sporting associations.”

“In some countries, there is a perception that children are not at risk in community organisations and recreational groups,” he said. “This can lead to a false sense of security that unintentionally leaves children and young people at risk of abuse.”

Based on the papal commission’s work in offering guidelines and best practices, the cardinal offered some suggestions for the SAFE project.

“Firstly, even the most stringent protection policies, educational programs and victims’ assistance services are fruitless if there is no regular verification of their implementation and efficacy” with open and transparent audits by outside third parties, he said.

Second, they should include survivors as partners in their work, he said.

Unfortunately, some dioceses have noted when they invite survivors or their loved ones “to attend confidential meetings and listening sessions, few if any persons respond, leading the leadership to conclude that there have been few if any occurrences of abuse in their diocese,” he said.

However, “there are very few if any places where the tragedy of sexual abuse has not occurred in the life of the church. We need to create a culture within our organisations that believes a survivor’s testimony, that mitigates silence born of fear or delays in addressing situations that put children and vulnerable adults at risk,” he said.

Finally, how people are to report abuse “must be publiciszed and accessible” in their associations and online.

“We must promote a culture in which children, young people and their families know they can speak out, know who they can speak to and that when they do, they will be heard and – where there is a risk of abuse – action will be taken,” the cardinal said.