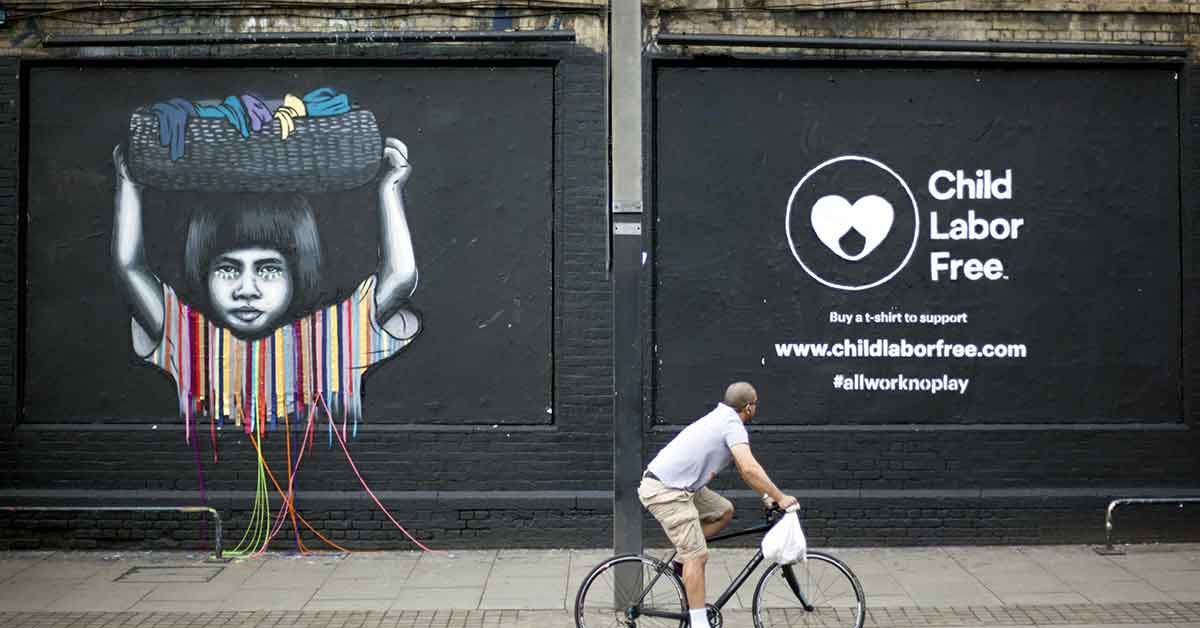 A cyclist passes a mural created by street artists depicting child labour in London. The Pope gave a talk to participants of an international conference on child labour in the Apostolic Palace at the Vatican on Nov. 19, 2021. (CNS photo/Shanshan Chen, Reuters)

By Carol Glatz – Extreme poverty, the lack of employment that can support a family and desperation are the major drivers of exploitative child labour, Pope Francis said.

“If we want to stamp out the scourge of child labour, we must work together to eradicate poverty (and) to correct the distortions in the current economic system, which concentrates wealth in the hands of a few,” he said.

“We must encourage nations and the stakeholders of the world of business to create opportunities for decent employment with fair wages that let families meet their needs without their children being forced to work,” he said Nov. 19 during a meeting with people taking part in an international conference on “Eradicating Child Labour, Building a Better Future.”

“We must combine our efforts to promote quality education that is free for everyone in every country, as well as a health care system that is equally accessible to everyone,” he added.

The Vatican COVID-19 Commission of the Dicastery for Promoting Integral Human Development supported the conference, which was organised in collaboration with the Permanent Mission of the Holy See to the U.N.’s Food and Agriculture Organisation.

The U.N. General Assembly declared 2021 the International Year for the Elimination of Child Labour; eliminating exploitative child labour also is one of the U.N. Sustainable Development Goals.

“Progress toward the elimination of child labour has stalled for the first time in 20 years with a reversal of the downward trend and numbers reaching 160 million children suffering worldwide of this situation,” which has worsened during the pandemic, the dicastery said on its website, using estimates provided by UNICEF and the International Labor Organisation.

The problem of child labour has nothing to do with age-appropriate chores and work that helps the family or their community and is carried out in their free time, the pope said.

Child labour is exploiting a child within a system of production in today’s globalised economy for the earnings and profits of others, he said.

“It is the denial of a child’s rights to health, education, sound development, including the possibility to play and dream,” he said. “This is tragic. A child who cannot dream, who can’t play, who cannot grow. It is robbing children of their future and, therefore, humanity itself. It is a violation of human dignity.”

The way people relate to children, including how much they respect their human dignity and fundamental rights, “expresses what kind of adults we are and want to be, and what kind of society we want to build,” the pope said.

“It is shocking and disturbing that in today’s economies, whose productive activities rely on technological innovations … the employment of children in work activities persists in every part of the world,” he said.

“Extreme poverty, lack of work and the resulting desperation in families are the factors that expose children most to labour exploitation,” he said.

Pope Francis urged the dicastery to continue its work aimed at ending child labour and praised the dicastery for gathering a diversity of participants, including representatives of international organizations, civil society, business and the church.

Thanking participants for their commitment to the cause, the pope encouraged them to never become discouraged “by the inevitable difficulties, but always expanding the network of people and organisations involved.”