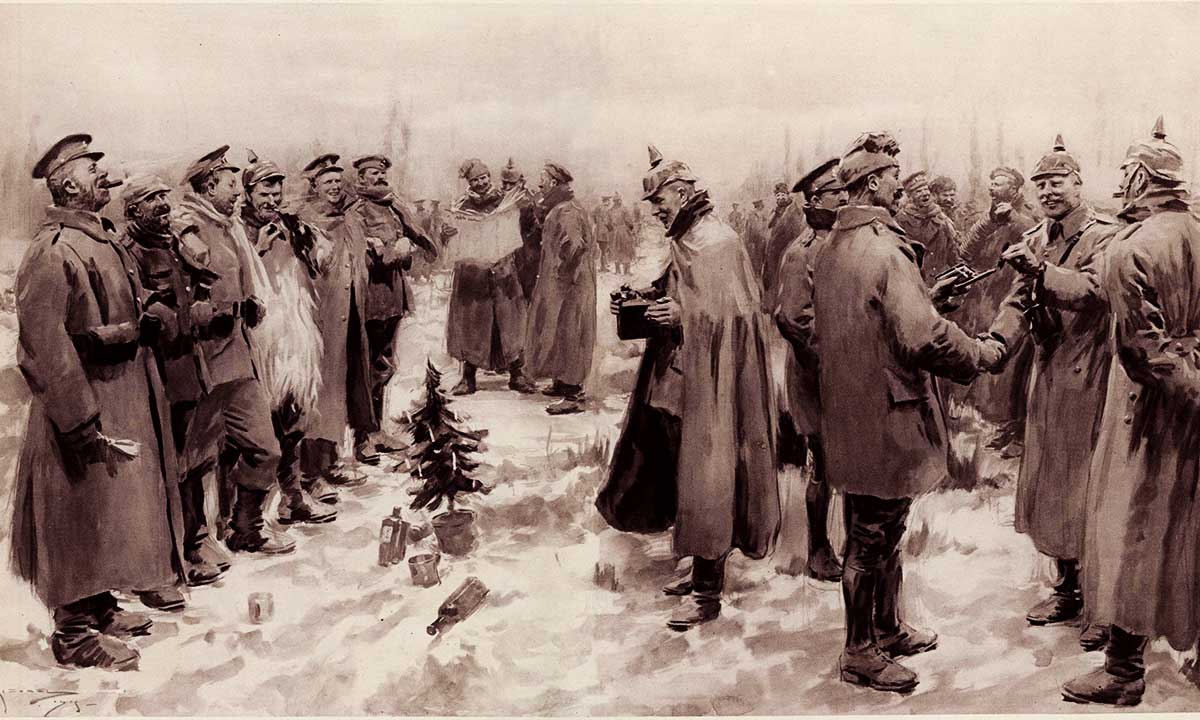 As the first Christmas of World War I approached, Pope Benedict XV on December 7, 1914, asked the leaders of all warring governments to agree to an official ceasefire. He begged “that the guns may fall silent at least upon the night the angels sang.”

Sadly, his plea was ignored by government leaders. But remarkably, many of the soldiers in the trenches declared their own unofficial truce.

On Christmas Eve of 1914, German troops in Ypres, Belgium put candles around their trenches and sang Christmas carols. When opposing British troops heard the Germans singing, they responded with Christmas carolling of their own.

Artillery throughout the region fell silent.

Then a remarkable scene occurred. German and British soldiers climbed out of their trenches and ventured unarmed into the highly dangerous “No Man’s Land” to exchange gifts of food and drink, as well as souvenir hats and buttons.

The truce also allowed opposing sides to retrieve their dead and participate in joint services.

A firsthand account of this inspiring Christmas truce was given by Bruce Bairnsfather, who fought with a British machine-gun unit. He wrote: “I wouldn’t have missed that unique and weird Christmas Day for anything. … I spotted a German officer, some sort of lieutenant I should think, and being a bit of a collector, I intimated to him that I had taken a fancy to some of his buttons. … I brought out my wire clippers and, with a few deft snips, removed a couple of his buttons and put them in my pocket. I then gave him two of mine in exchange.”

Reportedly as many as 100,000 British and German troops along much of the Western Front – a line of trenches stretching from the North Sea to the Swiss frontier with France – stopped fighting and engaged in similar acts of human kindness.

What an incredibly inspiring Christmas story! Nothing short of a miracle – when enemies became brothers!

But as is often the case, the “leaders” got in the way. High ranking officers ordered all such truces to stop – and to start killing again.

The political, cultural, military, media and economic forces for war have long been extremely powerful. And in recent decades their power has become almost invincible.

Our culture praises warriors. Our entertainment industry inspires a sick delight in war. With patriotic platitudes, politicians send our young men and women off to battle – to kill and be killed. Weapon producing corporations – like Lockheed Martin, Boeing, Northrop Grumman, Raytheon and General Dynamics – get rich from war and war preparation.

Clergy remain mostly silent. And countless Christians just simply accept all of this evil as normal.

Well, thank God not everyone follows the constant drumbeat to war. In fact, some who were once a part of the war machine are now committed to dismantling it. The organisation Veterans for Peace is an excellent example.

These former warriors now converts to nonviolence, have a prophetic message to all who support war: “Our collective experience tells us wars are easy to start and hard to stop and that those hurt are predominantly the innocent.”

The mass murder of war is right out of hell.

But Christmas is a time to think of heaven touching earth; a season to joyfully recall the Prince of Peace coming among us.

It’s a time to climb out of our trenches to grasp the hands of our enemies, and seriously reflect upon the message of angels who call each of us to build peace on earth and good will towards all.