In Christmas Messages, African Bishops Focus on Peace and Stability 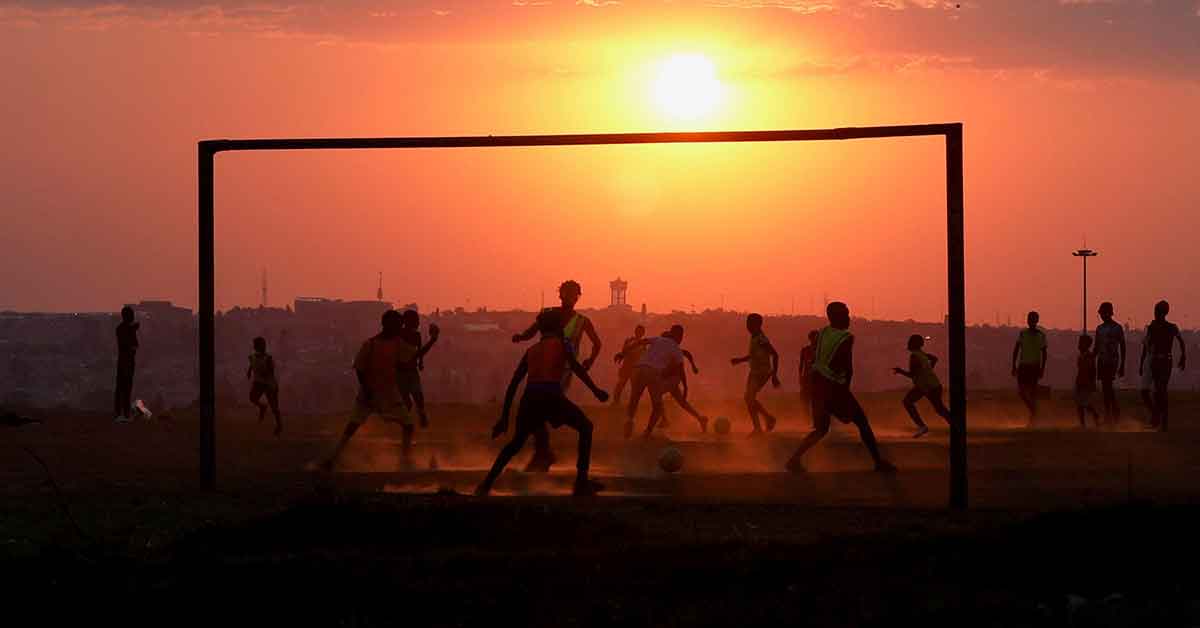 People play soccer on a dusty pitch in Soweto, South Africa, on Sept. 15, 2021. In Christmas and New Year messages, Catholic bishops in Africa expressed deep concerns about the severe challenges that threaten peace and stability throughout the continent. (CNS photo/Siphiwe Sibeko, Reuters)

By Francis Njuguna – In Christmas and New Year’s messages, Catholic bishops and religious leaders across Africa expressed deep concerns about the severe challenges that threaten peace and stability throughout much of the continent.

The messages took on a common theme as they urged government leaders and opposing factions to come together to end confrontation and seek reconciliation so that local communities can confront dire poverty, climate change and other dangers.

In Chad, the country’s bishops focused on the need for dialogue among the political parties in the country because discussions to date have not yet achieved the goal of peace.

“The demand for an inclusive national dialogue by the majority of Chadians expresses their desire to change the dark page of their history and to look to the future with optimism,” the Chadian bishops’ conference said in its message ahead of Christmas.

Chad is under the control of a Transitional Military Council chaired by Gen. Mahamat Déby, who has invited opposition parties to discuss restoring democracy to the landlocked country. Déby, whose position makes him the de facto president, succeeded his father, Idriss Déby, who died in a military offensive against rebel forces in April.

“For many of our fellow citizens, the process of inclusive national dialogue represents a great hope for ensuring lasting peace in our country,” the bishops said.

They also said the failure to listen to voices of marginalised Chadians has reinforced long-held concerns and led to greater scepticism among civil society leaders that a more inclusive government can be formed.

In July, the bishops conference called for an “inclusive national dialogue” that can bring together various stakeholders throughout the country.

They noted that, “the death of President Déby has made this crisis obvious, and this inclusive national dialogue and reconciliation is becoming an urgent necessity in order to enable all the children of Chad to come together and agree on a new social contract that should bind them for the next few decades.”

In Sudan, Bishop Yunan Andali of El Obeid, president of the Sudan Catholic Bishops’ Conference, called on the faithful to pray for peace and justice in the country, which saw its path toward sustainable democratic rule sidetracked by a military coup Oct. 25.

In a Dec. 19 Christmas message, Bishop Andali noted that the celebration of the birth of Jesus is being observed during the third year of uncertainty since a popular uprising in 2019 overthrew longtime autocrat Omar al-Bashir in an effort to restore democracy. Street protests have occurred regularly throughout the country since the coup.

In the west Africa nation of Ghana, the Catholic bishops in a Dec. 17 Christmas message expressed concern for what they described as a growing culture of insults and disrespect among the Ghanaian people.

“We, as bishops, are alarmed by the unfortunate growing culture of disrespect and insults in Ghana, especially in our nation’s political arena and so wish to call on all our politicians and indeed, all citizens, to endeavour to put an end to this rising phenomenon,” they said.

Elsewhere, as war continues to unfold in Ethiopia’s northern region of Tigray, Tigrayan Christians in the diaspora called for intensified prayers worldwide to end what they called a “genocide against the people of the region.”

The Rev. Tekeste Araya, chairman of the Tigray Diaspora Inter-Religious Council, said at a time when Christians were about to celebrate Christmas, the government had brought death and destruction to the semi-autonomous region, shelling and bombing cities, carrying out mass arrests, blocking aid, all actions that have caused a man-made famine.

“Please pray for comfort and strength to the families of the 150,000 civilian Tigrayans who have been indiscriminately killed, including inside some of the most sacred and ancient churches,” Rev. Araya appealed in his Dec. 21 message.

He also called for prayers for an estimated 52,000 women, children and elderly people as well as a woman religious raped by Ethiopian, Eritrean and Ahmara forces during the violence.

People lack medical care with many on the brink of death from starvation, he said. His message also highlighted Ethiopian military actions including the profiling of individuals, massive roundups and confining hundreds of thousands in concentration camps under appalling conditions. Those in the diaspora suffered immensely not knowing the fate of their family members, the cleric said.

Rev. Araya urged prayers for Ethiopian Christian institutions so that they can return to carrying out ministries, stand with persecuted people and preach peace and reconciliation.

Statistics compiled by the council show that 2.2 million people have been displaced by the violence and that overall 6.3 million face starvation.

Meanwhile, Catholic bishops in Ethiopia reiterated their sorrow and sadness at the 13-monthlong deadly conflict. At a mid-December meeting in Addis Ababa, the bishops noted that the war had killed and displaced many people, destroyed property and disrupted harmony among the citizens.

A culture of dialogue should be encouraged, said the bishops, while promising that the church will play its role in an eventual conclusive dialogue of their country.

“The way of peace reconciles regenerate beauty of fraternity, which heals all wounds. We ought to help one another believe in the patient and assuming power of dialogue,” they said.

At the same time, the church announced that it will scale up its humanitarian response. Church officials are hoping to raise $2 million to aid people facing war and natural disasters.