2022 World Day of Peace message: Yes, to human needs! No, to militarisation! 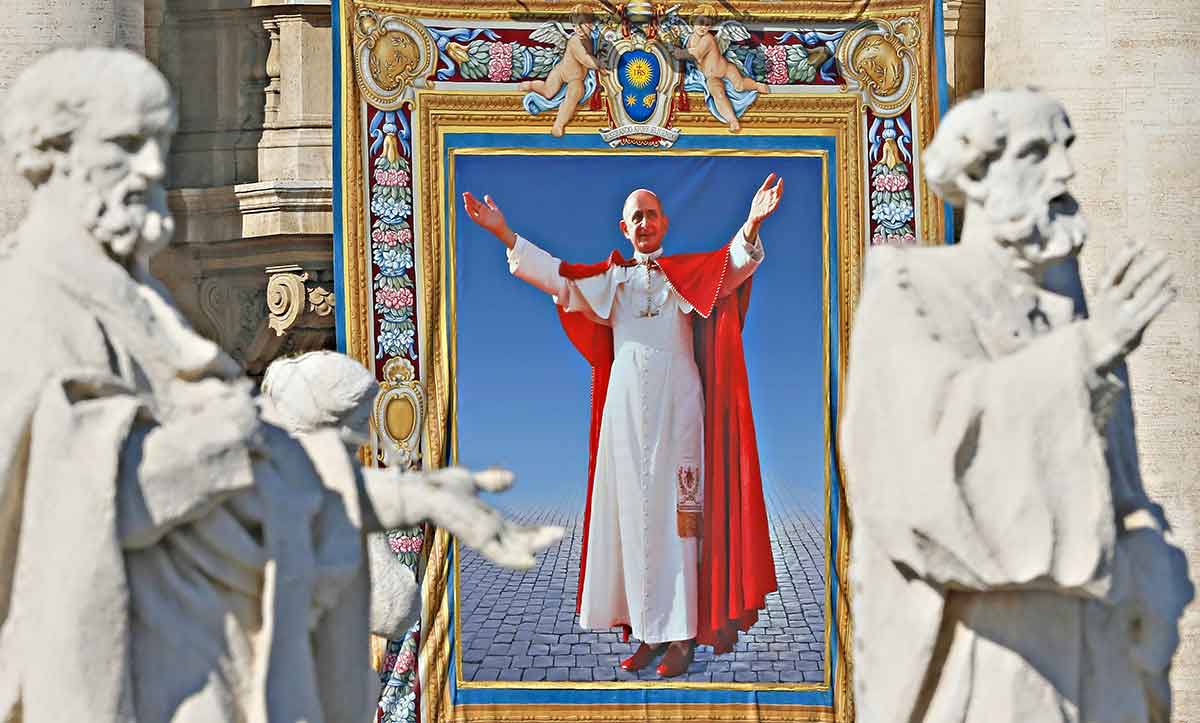 Pope Paul VI is depicted in a tapestry on the facade of St Peter’s basilica during his beatification Mass in 2014. He was be canonised there on October 14. (Photo: Paul Haring/CNS)

Fifty-five years ago, on Jan. 1, 1968, with the Vietnam War raging, and numerous other armed conflicts causing untold death and destruction, St. Pope Paul VI initiated the first World Day of Peace. He wrote, “We address ourself to all men of goodwill to exhort them to celebrate “The Day of Peace” throughout the world, on the first day of the year.”

Pope Paul emphasised that this annual day of peace should encourage the defence of peace from selfish national ambitions in relations among nations, and should oppose the increasing danger of “recourse to frightful weapons of extermination, which some nations possess.” He further explained that this day of peace should challenge the harmful injustice of spending enormous money on weapons, “the expenditure of which is reason for painful reflection in the presence of the grave needs which hinder the development of so many other peoples.”

With the passing of 55 years, it is most unfortunate that St. Pope Paul’s dire words of warning against vast expenditures on armaments at the price of unmet desperate needs of countless poor and vulnerable brothers and sisters, still need to be echoed by his current predecessor.

Pope Francis, in his Jan. 1, 2022 World Day of Peace message entitled Dialogue between generations, education and work: tools for building lasting peace, writes “In recent years, there has been a significant reduction worldwide in funding for education and training; these have been seen more as expenditures than investments. Yet they are the primary means of promoting integral human development; they make individuals more free and responsible, and they are essential for the defence and promotion of peace.”

The Holy Father continues writing in his challenging message that “Military expenditures, on the other hand, have increased beyond the levels at the end of the Cold War and they seem certain to grow exorbitantly.”

The Stockholm International Peace Research Institute reports that world military spending rose to almost $2 trillion in 2020 – even amid the global COVID pandemic. The U.S.as the largest military spender, allocated a whopping $778 billion for its military (see: https://bit.ly/34fOueN).

Condemning this highly immoral misdirected use of valuable funds, Pope Francis writes, “It is high time, then, that governments develop economic policies aimed at inverting the proportion of public funds spent on education and on weaponry. The pursuit of a genuine process of international disarmament can only prove beneficial for the development of peoples and nations, freeing up financial resources better used for health care, schools, infrastructure, care of the land and so forth.”

The old bumper-sticker attributed to the down-to-earth wisdom writer, Robert Fulghum, fits nicely here: “It will be a great day when our schools have all the money they need, and our air force has to have a bake-sale to buy a bomber.”

Pope Francis also makes a point to emphasise the importance of political responsibility in addressing the rights of workers and the common good. He writes, “Politics is called to play an active role by promoting a fair balance between economic freedom and social justice. All who work in this field, starting with Catholic workers and entrepreneurs, can find sure guidelines in the Church’s social doctrine”(see: https://bit.ly/3pMGWZj) and https://www.crs.org/resource-center/CST-101).

In closing his 2022 World Day of Peace message, Pope Francis offers this invitation: “May more and more men and women strive daily, with quiet humility and courage, to be artisans of peace. And may they be ever inspired and accompanied by the blessings of the God of peace!”

Let’s be sure to accept the Holy Father’s invitation. Let’s become “artisans of peace!”