No violence against women, say Irish bishops after teacher’s murder 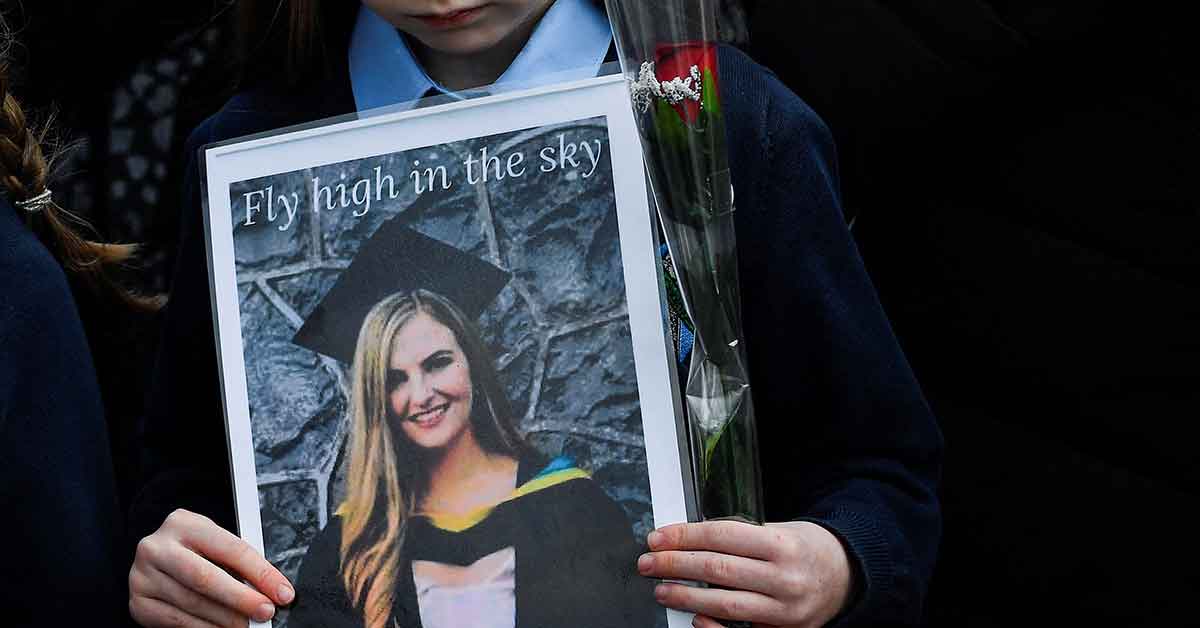 Students of Ashling Murphy, a 23-year-old Catholic teacher at Durrow National School, hold her pictures as people gather before her funeral Mass at St. Brigid’s Church in Mountbolus, Ireland, Jan. 18, 2022. She was murdered while out jogging Jan. 12. (CNS photo/Clodagh Kilcoyne, Reuters)

By Sarah Mac Donald – Following the violent death of a 23-year-old schoolteacher in a midlands town, two Irish bishops have questioned societal attitudes toward women and reiterated Pope Francis’ contention that violence against women is an insult to God.

They were there to express the grief and outrage of the nation over the killing of the talented musician, sportswoman and devoted teacher in broad daylight while she was jogging along a canal bank in Tullamore the afternoon of Jan. 12.

Thousands of people stood along the funeral route to express solidarity with Murphy’s grieving family. Vigils were held across Ireland, Britain and beyond over the weekend, to remember Murphy and all the women who have died through gender-based violence in recent years. Since 1996, 244 women have been killed violently in Ireland, according to Women’s Aid.

Before the final Prayer of Commendation at the funeral, Bishop Tom Deenihan of Meath told mourners, “A walk on a mild and sunny afternoon in January should be a happy event, promising the brighter and warmer days of spring and summer.”

Instead, a “depraved act of violence which deprived a kind, talented, loved and admired young woman of her life” had united the country in grief.

He said the crime asked questions of “our attitudes toward women, and it has questioned our values and our morality.”

“We cannot allow such violence and disregard for both human life and bodily integrity (to) take root in our time and culture,” he said.

Quoting from Pope Francis’ homily for New Year’s Day on violence against women, Bishop Deenihan added, “We all know that no individual should die like Ashling, and no family should suffer like Ashling’s.”

Father Michael Meade, parish priest of Kilcormac & Killoughey, who was chief celebrant at the funeral Mass and is a close friend of the Murphy family, appealed, “Let us not be afraid to make change a reality.”

In Limerick, Bishop Brendan Leahy said society owed it to Murphy’s memory “to ensure her journey did not end on Wednesday but rather marked a new and better beginning for how women are treated, how they are respected and, indeed, protected.”

He said the message “that violence against women is unacceptable” needed to be shouted from the rooftops across all organisations and communities.

Addressing the congregation in the parish of Killeedy, he said, “Let’s acknowledge to one another just how vital it is to promote a culture that is clearly and unambiguously opposed to violence, especially violence against women.”