Pope Gives Thanks for Past Year 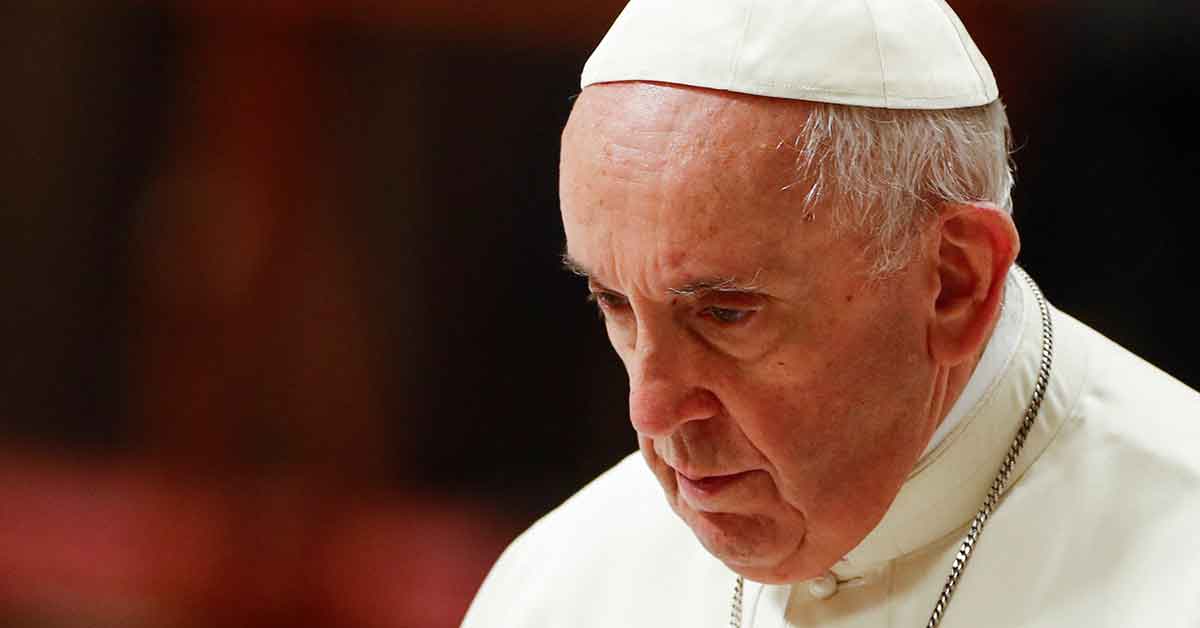 Pope Francis leaves at the conclusion of an evening prayer service in St. Peter’s Basilica at the Vatican Dec. 31, 2021. The traditional service on New Year’s Eve is to give thanks for the past year. (CNS photo/Remo Casilli, Reuters)

By Junno Arocho Esteves  – Christian hope grants those who suffer the assurance that God does not abandon his people in their time of need, Pope Francis said.

“Problems do not vanish, difficulties and worries are not lacking, but we are not alone; the Father ‘sent forth his son’ to redeem us from the slavery of sin and to restore our dignity as children,” the pope said Dec. 31.

To mark the end of 2021, Pope Francis took part in an evening prayer service in St. Peter’s Basilica. Surprisingly, however, the pope did not preside over the prayer service as scheduled; instead, the Vatican press office said, he wanted Cardinal Giovanni Battista Re, dean of the College of Cardinals, to preside.

Last year, Cardinal Re presided over the traditional end-of-the-year prayer service after the Vatican announced Pope Francis would not attend due to a flare up of “painful sciatica.”

Arriving several minutes before the liturgy began, the pope greeted Rome’s new mayor, Roberto Gualtieri, and shook his hand before taking a seat in a white chair set in front of several cardinals.

The service included the singing of the “Te Deum” (“We praise you, oh God”) in thanksgiving for the blessings of the past year, as well as eucharistic adoration and benediction.

Although he did not preside over the liturgy, the pope delivered a brief homily reflecting on the recent celebration of Christmas and highlighting the “amazement, wonder and contemplation” of the shepherds who first received the announcement of Jesus’ birth.

Christmas, he said, is celebrated with amazement and not just a “superficial sentiment connected with the externals of the feast, or worse yet, with the frenzy of consumerism.”

“If Christmas is reduced to this, nothing changes,” the pope said. “Tomorrow will be just like yesterday, next year will be like last year, and so on. That is like warming ourselves for a few seconds by a straw fire rather than exposing our entire beings to the power of the event, not grasping the heart of the mystery of Christ’s birth.”

At the first vespers for the feast of Mary, the Mother of God, the pope said she is “the first and the greatest” witness to God’s love and was filled with an amazement devoid of “romanticism, sweeteners or spiritualisation” that all Christians should aspire to have within themselves.

“Christian amazement is not the result of special effects, of fantasy worlds, but from the mystery of reality: there is nothing more amazing and stupefying than reality!” the pope said. “A flower, a clod of earth, a life story, an encounter, the wrinkled face of an elderly person or the blooming face of a newborn baby, a mamma who nurses a baby in her arms. The mystery shines there.”

As more countries dealing with the spread of the omicron COVID-19 variant, Pope Francis said that “a sense of being lost has grown in the world during this time of the pandemic.”

The pope, who wore a mask except when preaching, explained that while there was a sense of solidarity at the beginning of the pandemic, “the ‘every man for himself’ temptation spread.”

Nevertheless, the pope said the world “reacted again with a sense of responsibility,” for which Christians should be grateful to God because “the choice to be responsible in solidarity does not come from the world; it comes from God.”

Because of the rising number of COVID-19 cases, the Vatican had announced Dec. 30 that the pope would not make his customary visit to the Nativity scene in St. Peter’s Square after the evening prayer service. Hundreds of people typically gather around the creche waiting for the pope.

With Mayor Gualtieri seated in the front row, Pope Francis said the Eternal City has the calling to solidarity “written in its heart” and that everyone who comes to Rome “feels at home because this city preserves a universal openness within it.”

However, he also said that “a welcoming and fraternal city is not recognised as such by a ‘facade,’ by beautiful discourses, by pretentious events” but by the way it pays attention to those who struggle every day.

“The hope, then, is that everyone who lives and works here, or are pilgrims or tourists, that everyone might appreciate Rome more and more for its welcoming care for the dignity of life, for our common home, for the weakest and most vulnerable,” he added.

Contemplating on Mary as mother to both Jesus and the church, Pope Francis said she continues to call on Christians to follow Christ in their lives and to trust in him.

Jesus, the pope said, “brings time to its fullness, he gives meaning to what we do and to the days we live. Let us trust in joyful times and in sorrowful times: the hope he gives us is a hope that never disappoints.”