Pope on New Year: It’s about peace in our hearts 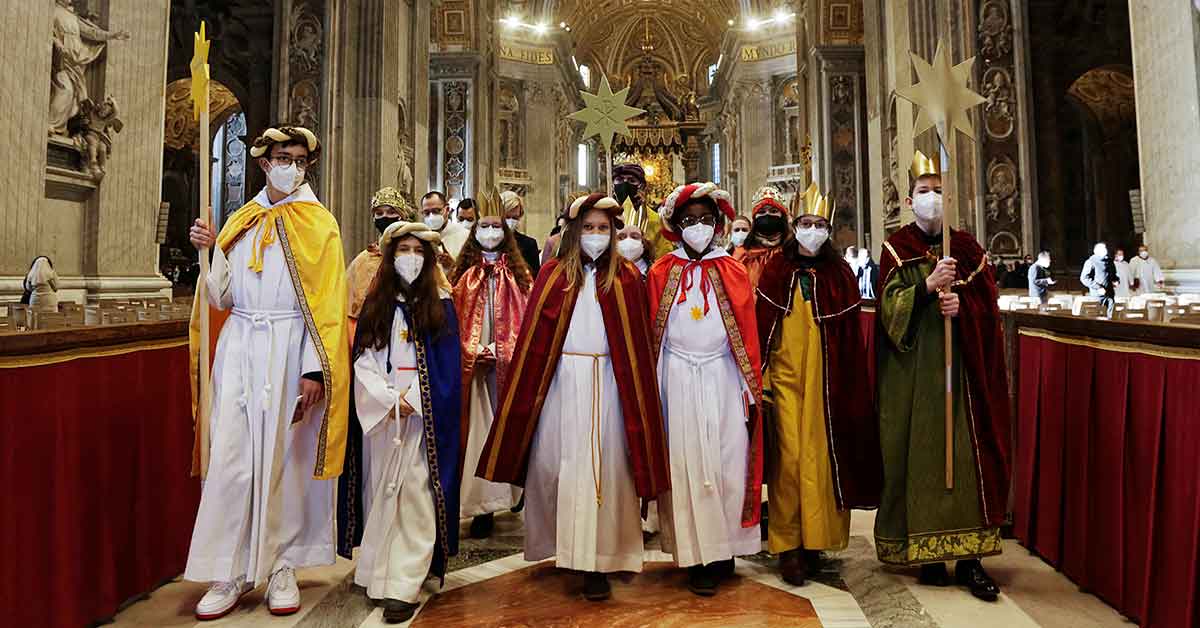 Young people dressed as the Magi walk in the central aisle of St. Peter’s Basilica after attending Pope Francis’ celebration of Mass on the feast of Mary, Mother of God, at the Vatican Jan. 1, 2022. German, Italian and Swiss young people, called “sternsingers,” carol and raise money for charity between Christmas and Epiphany each year. (CNS photo/Romano Siciliani, pool)

By Cindy Wooden –  As Catholics begin a new year contemplating the motherhood of Mary, they should be inspired not to let problems weaken their faith or prevent them from helping others grow, Pope Francis said.

“In her heart, in her prayer,” he said, Mary “binds together the beautiful things and the unpleasant things,” and learns to discern God’s plan in them.

Pope Francis celebrated Mass Jan. 1, the feast of Mary, Mother of God, and World Peace Day, in St. Peter’s Basilica and then led the recitation of the Angelus prayer in St. Peter’s Square with thousands of people, including dozens who held signs with the names of countries at war.

In his homily at the Mass, Pope Francis pleaded for an end to violence against women.

“Enough,” he said. “To hurt a woman is to insult God, who from a woman took on our humanity.”

And, in his Angelus address, Pope Francis insisted peace is a gift from God that requires human action.

“We can truly build peace only if we have peace in our hearts, only if we receive it from the prince of peace,” he said. “But peace is also our commitment: it asks us to take the first step, it demands concrete actions. It is built by being attentive to the least, by promoting justice, with the courage to forgive, thus extinguishing the fire of hatred.”

Peace also requires “a positive outlook as well, one that always sees, in the church as well as in society, not the evil that divides us, but the good that unites us,” the pope said. “Getting depressed or complaining is useless. We need to roll up our sleeves to build peace.”

Pope Francis said he could not look at Mary holding the baby Jesus in her arms without thinking of “young mothers and their children fleeing wars and famine or waiting in refugee camps. And there are many of them.”

“Contemplating Mary who lays Jesus in the manger, making him available to everyone, let’s remember that the world can change, and everyone’s life can improve only if we make ourselves available to others, without expecting them to begin,” he said. “If we become artisans of fraternity, we will be able to mend the threads of a world torn apart by war and violence.” 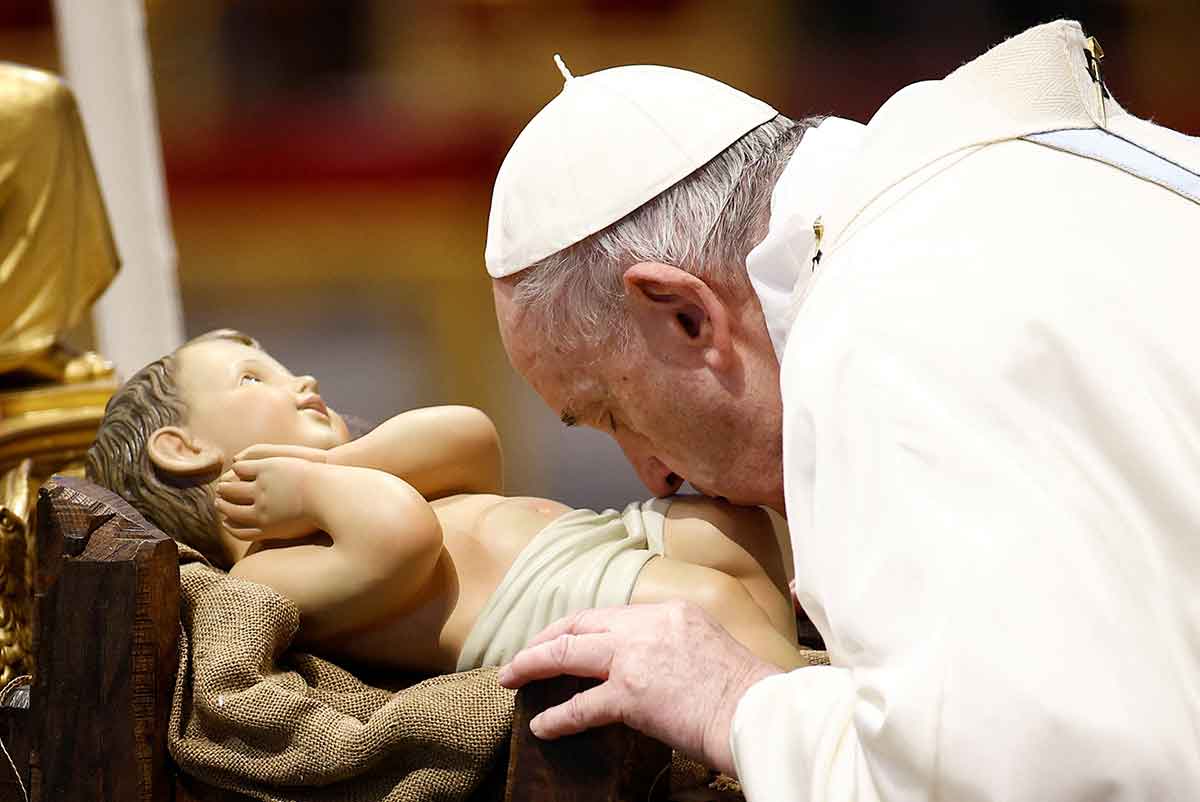 Pope Francis kisses a figurine of the baby Jesus as he arrives to celebrate Mass marking the feast of Mary, Mother of God, in St. Peter’s Basilica at the Vatican Jan. 1, 2022. (CNS photo/Guglielmo Mangiapane, Reuters)

In his homily earlier at the Mass, Pope Francis asked people to consider what it must have been like for Mary, who had been told by the angel that her son would be great, to give birth in an animals’ stall and to lay her baby in a manger instead of a cradle.

“His poverty is good news for everyone, especially the marginalised, the rejected and those who do not count in the eyes of the world,” the pope said. “For that is how God comes: not on a fast track and lacking even a cradle! That is what is beautiful about seeing him there, laid in a manger.”

But for Mary, a mother, it must have been painful to see her son in such poverty, the pope said.

Pope Francis contrasted the amazement and enthusiasm of the shepherds with the quiet, pensive reaction of Mary.

“The shepherds tell everyone about what they had seen,” he said. “The story told by the shepherds, and their own amazement, remind us of the beginnings of faith, when everything seems easy and straightforward.”

“Mary’s pensiveness, on the other hand, is the expression of a mature, adult faith,” he said. Hers is “not a newborn faith, but a faith that now gives birth. For spiritual fruitfulness is born of trials and testing.” 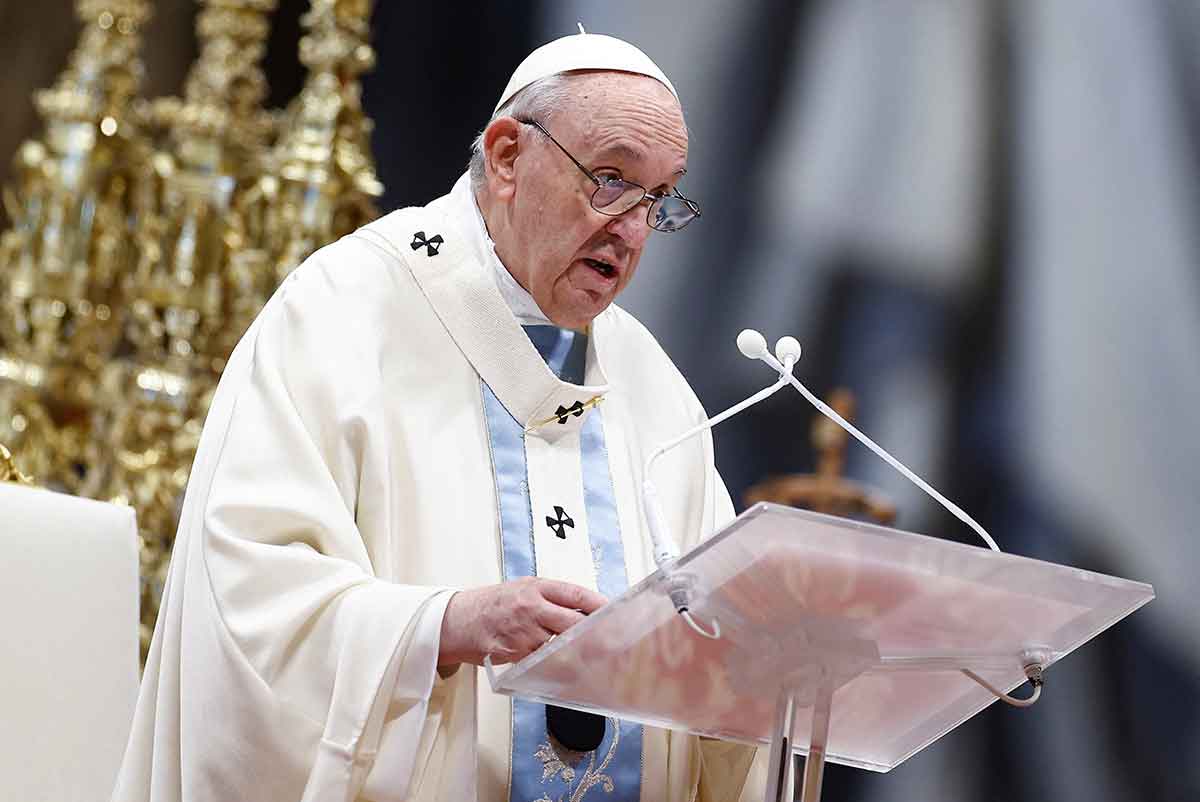 Pope Francis gives the homily as he celebrates Mass marking the feast of Mary, Mother of God, in St. Peter’s Basilica at the Vatican Jan. 1, 2022. (CNS photo/Guglielmo Mangiapane, Reuters)

Mary “gives God to the world” in a dark stable in Bethlehem, he said. “Others, before the scandal of the manger, might feel deeply troubled. She does not: she keeps those things, pondering them in her heart.”

And through faith, he said, “in her mother’s heart, Mary comes to realize that the glory of the Most High appears in humility; she welcomes the plan of salvation whereby God must lie in a manger. She sees the divine child frail and shivering, and she accepts the wondrous divine interplay between grandeur and littleness.”

Mary, like most mothers, knew how “to hold together the various threads of life,” the glorious and the worrisome, the pope said. “We need such people, capable of weaving the threads of communion in place of the barbed wire of conflict and division.”

Departing from his prepared text, Pope Francis said the church itself is “mother and woman,” and while women could and should have greater positions in the church, they are “secondary” to the role all Catholic women have of giving life, including figuratively, and in combining “dreams and aspirations with concrete reality, without drifting into abstraction and sterile pragmatism.”

“At the beginning of the New Year,” he said, “let us place ourselves under the protection of this woman, the mother of God, who is also our mother. May she help us to keep and ponder all things, unafraid of trials and with the joyful certainty that the Lord is faithful and can transform every cross into a resurrection.”