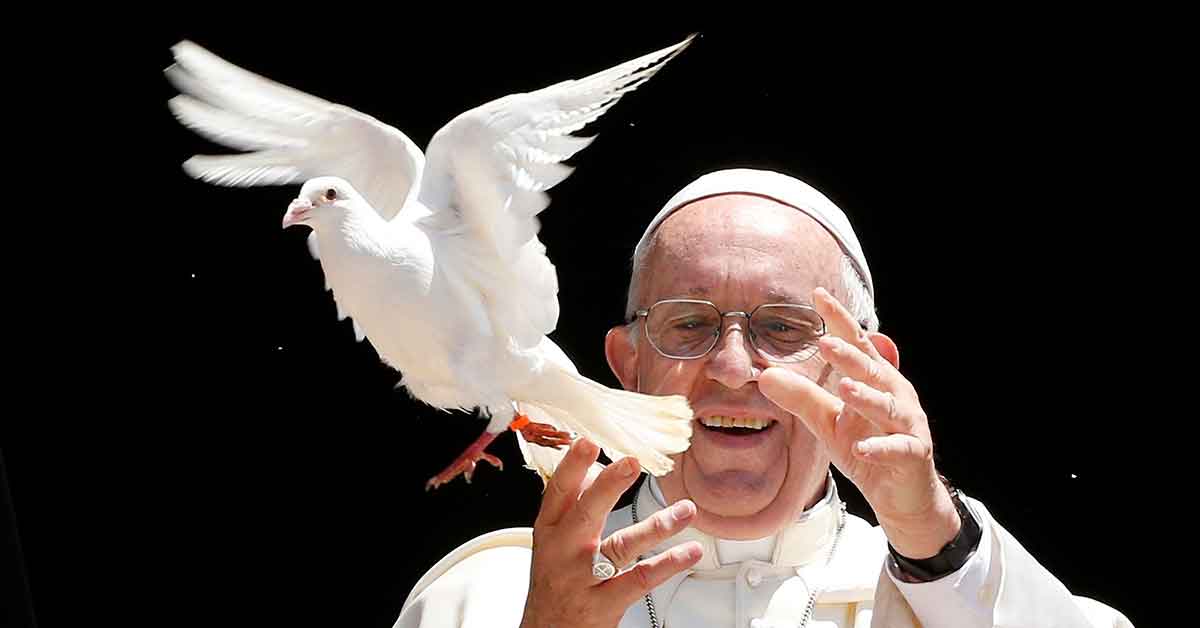 Pope Francis releases a dove as a sign of peace outside the Basilica of St. Nicholas after meeting with the leaders of Christian churches in Bari, Italy, July 7, 2018.  (CNS photo/Paul Haring)

By Carol Glatz – Governments must pour more money into education and drastically reduce military spending for there to be genuine progress and peace in the world, Pope Francis said in his annual message for the World Day of Peace on January 1.

“It is high time, then, that governments develop economic policies aimed at inverting the proportion of public funds spent on education and on weaponry,” the pope said.

“The pursuit of a genuine process of international disarmament can only prove beneficial for the development of peoples and nations, freeing up financial resources better used for health care, schools, infrastructure, care of the land and so forth,” he said.

The pope’s message was released on Dec. 21 at a Vatican news conference led by Cardinal Peter Turkson, prefect of the Dicastery for Promoting Integral Human Development.

The pope’s message, which the Vatican sends to heads of state around the world, invited everyone to “work together to build a more peaceful world, starting from the hearts of individuals and relationships in the family, then within society and with the environment, and all the way up to relationships between peoples and nations.”

Pope Francis proposed “three paths” for building lasting peace: dialogue between generations and concrete projects they can share; education aimed at building freedom, responsibility and development; and dignified labour that protects people’s rights and the environment.

“Great social challenges and peace processes necessarily call for dialogue between the keepers of memory – the elderly – and those who move history forward – the young,” Pope Francis said.

“The global crisis we are experiencing makes it clear that encounter and dialogue between generations should be the driving force behind a healthy politics,” one that “is not content to manage the present ‘with piecemeal solutions or quick fixes,’ but views itself as an outstanding form of love for others, in the search for shared and sustainable projects for the future,” he said.

Young people, he added, also should be given respect and encouragement for their commitment to working for a more just and sustainable world.

Education helps provide the skills and setting for dialogue between generations, cooperation and sharing expertise and experiences for promoting integral human development, he said. However, “there has been a significant reduction worldwide in funding for education and training; these have been seen more as expenditures than investments.”

At the same time, he said, military expenditures “have increased beyond the levels at the end of the Cold War and they seem certain to grow exorbitantly.”

He called on governments to cut military spending, boost investment in education and do more to “promote the culture of care, which, in the face of social divisions and unresponsive institutions, could become a common language working to break down barriers and build bridges.”

Cardinal Turkson told reporters that trying to build security through stockpiling weapons only creates more distrust, which, in turn, feeds a desire for more weapons.

Working on building trust will help in reducing arms spending, he said, and the more the world develops an increased sense of human fraternity and “closeness,” the more arms will become unnecessary.

The pope said in his message that having dignified work is also part of building and keeping peace as it lets people contribute toward “a more habitable and beautiful world.”

But the COVID-19 pandemic has hurt many in a labour market that was already facing multiple challenges and it has had a devastating impact on “the informal economy, which often involves migrant workers,” he said.

Many migrant workers and their families “live in highly precarious conditions, prey to various forms of slavery and with no system of welfare to protect them,” the pope said. “Currently only one-third of the world’s population of working-age enjoys a system of social protection, or benefit from it only in limited ways.”

The only answer to this and other challenges “is an expansion of dignified employment opportunities” and decent working conditions for jobs that support the common good and safeguard creation, the pope said.

“The freedom of entrepreneurial initiatives needs to be ensured and supported,” he said. “At the same time, efforts must be made to encourage a renewed sense of social responsibility, so that profit will not be the sole guiding criterion.”

Companies need to respect the fundamental human rights of workers, and this requires “raising awareness not only on the part of institutions, but also among consumers, civil society and entrepreneurial entities,” he said.

Politics has an active role to play here “by promoting a fair balance between economic freedom and social justice,” he said, adding that Catholic workers and entrepreneurs can find guidance with the church’s social doctrine.

Salesian Sister Alessandra Smerilli, interim secretary of the human development dicastery, said at the news conference, “There is no justice without fair … decent and respectful jobs for all.”

Sister Smerilli, who is also part of the Vatican’s COVID-19 Commission, said the dicastery and commission were launching a “Work for All” project that will get input from people who are “looking for creative solutions to the problems of work” so that the right conditions can be created “for something new to happen.”

“Work can no longer be disconnected from care,” she said.

“If we leave it all to the market, the ‘discarded’ will increase and they will be rejected from (having) income and care; we must put care back at the centre of the social contract,” she said.