Pope: People’s Mistakes and Sins Do Not Frighten God 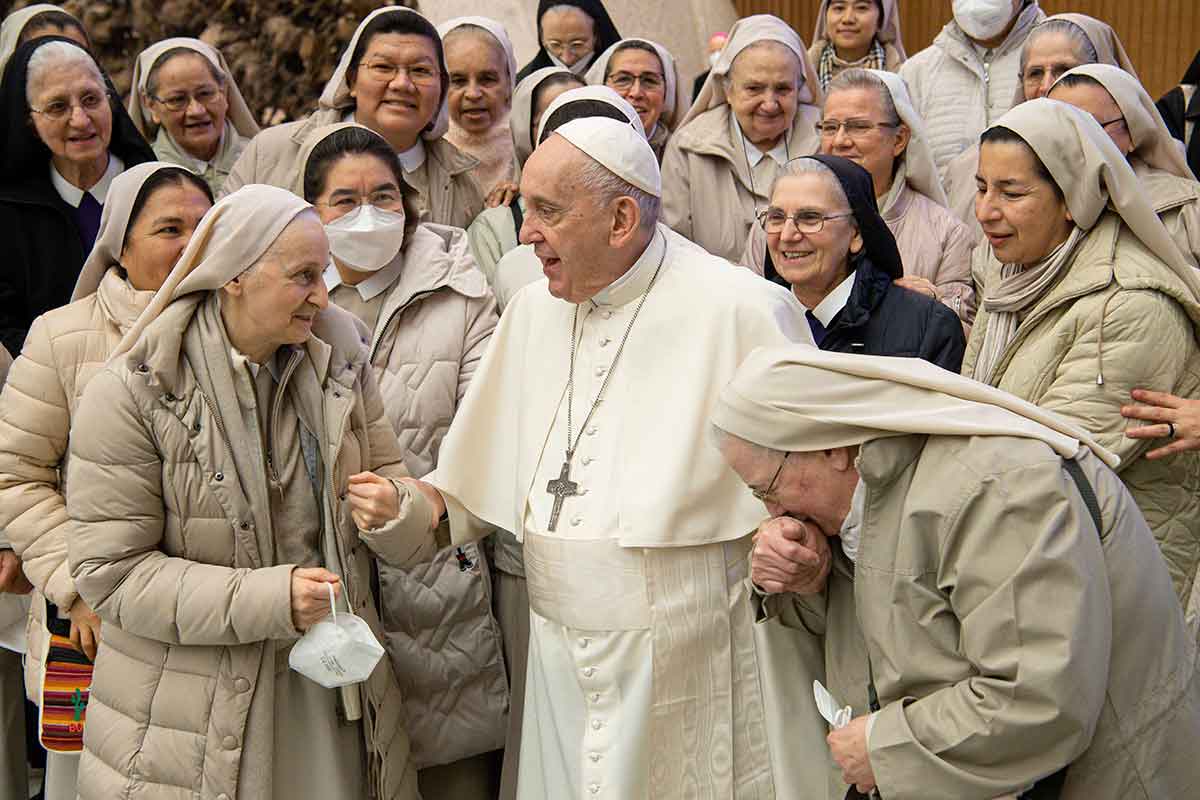 Pope Francis meets a group of nuns during his general audience in the Paul VI hall at the Vatican Jan. 19, 2022. (CNS photo/Vatican Media)

By Carol Glatz – God is not frightened by people’s sins, mistakes or failures, Pope Francis said.

What God is afraid of is “the closure of our hearts – this, yes, this makes him suffer – he is frightened by our lack of faith in his love,” the pope said Jan. 19 during his weekly general audience.

Everybody must “square accounts” with what they have done, but “settling the accounts with God is a beautiful thing because we start talking and he embraces us” with tenderness, the pope said.

Pope Francis continued his series of audience talks about St. Joseph, reflecting on his tenderness.

Very little detail is found in the Gospels about St. Joseph’s fatherly approach, but “we can be sure that his being a ‘just’ man also translated into the education he gave to Jesus,” the pope said.

Jesus understood God’s tenderness and love, experiencing it first through St. Joseph, he said. “The things of God always come to us through the mediation of human experiences.”

“There is great tenderness in the experience of God’s love, and it is beautiful to think that the first person to transmit this reality to Jesus was Joseph himself,” he said. 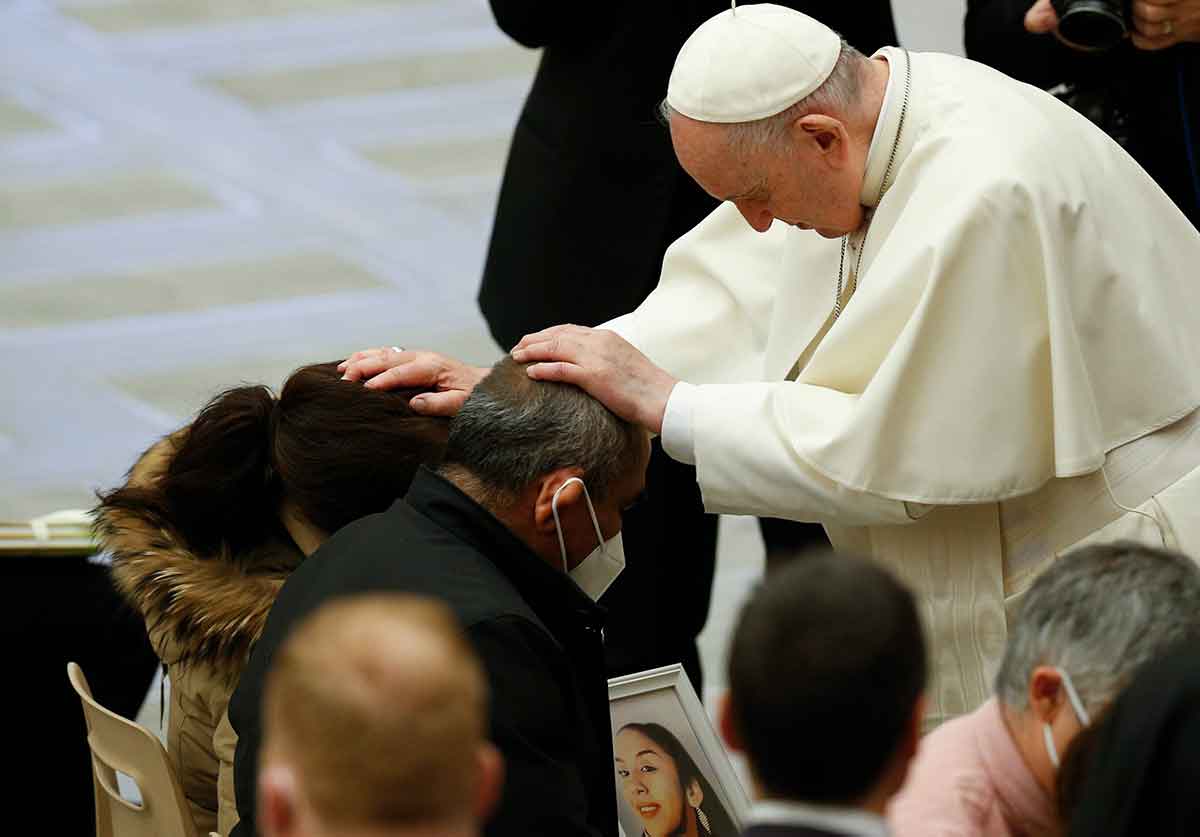 Pope Francis blesses people during his general audience in the Paul VI hall at the Vatican Jan. 19, 2022. (CNS photo/Paul Haring)

In fact, Jesus always used the word “father” to speak of God and his love, he said. The most memorable account of God’s mercy is Jesus’ parable of the prodigal son, who expected punishment for his sins, but instead “he finds himself wrapped in his father’s embrace.”

“Tenderness is something greater than the logic of the world. It is an unexpected way of doing justice,” Pope Francis said.

“That is why we must never forget that God is not frightened by our sins,” he said, because God “is greater than our sins: he is the father, he is love, he is tender.”

Tenderness is “the experience of feeling loved and welcomed precisely in our poverty and misery, and thus transformed by God’s love,” the pope said.

“The experience of tenderness consists in seeing God’s power pass through precisely that which makes us most fragile; on the condition, however, that we are converted from the gaze of the Evil One who ‘makes us see and condemn our frailty,’ while the Holy Spirit ‘brings it to light with tender love,'” the pope said, quoting from his apostolic letter on St. Joseph, “Patris corde.” 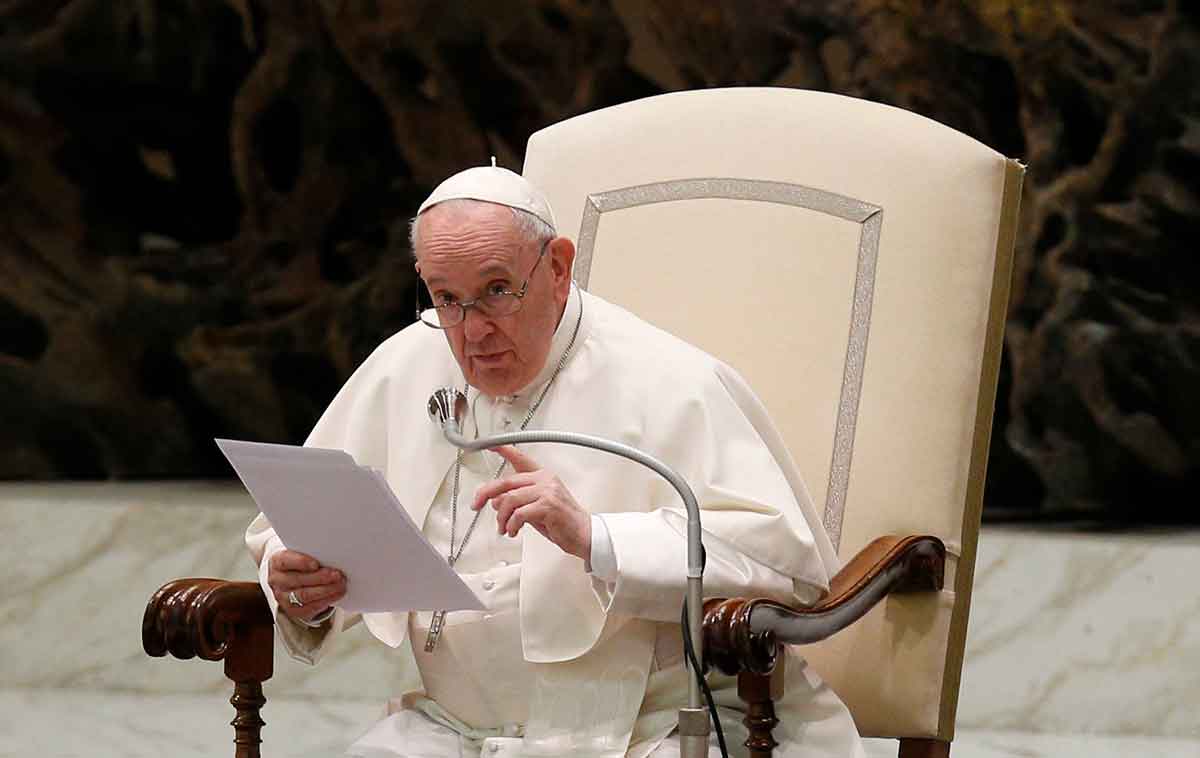 Pope Francis speaks during his general audience in the Paul VI hall at the Vatican Jan. 19, 2022. (CNS photo/Paul Haring)

If the devil ever speaks the truth to people, it is because he is twisting it “to tell us a lie” and to “condemn us,” the pope said. “Instead, the Lord tells us the truth and reaches out his hand to save us. We know that God’s truth does not condemn, but instead welcomes, embraces, sustains and forgives us.”

The world needs this “revolution of tenderness” and, without it, “we risk remaining imprisoned in a justice that does not allow us to rise easily and that confuses redemption with punishment,” he added.

With this in mind, the pope highlighted what people in prison need most.

“Let us think of our brothers and sisters in prison, and think of God’s tenderness for them, and let us pray for them, so they might find in that window of hope a way out toward a better life.”