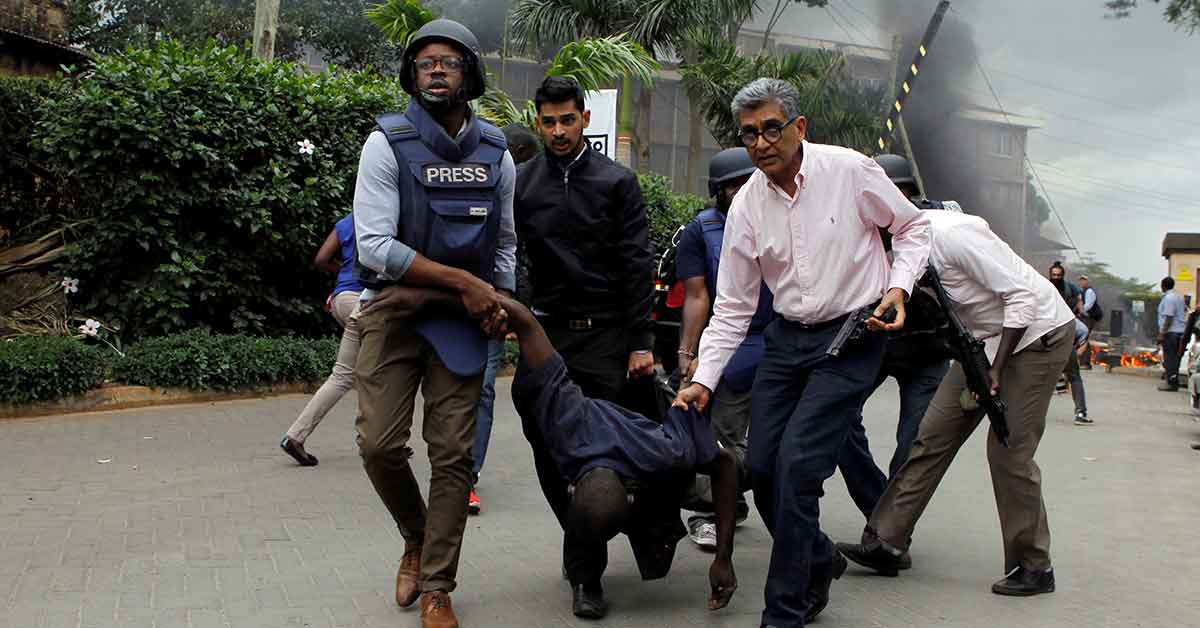 By Fredrick Nzwili – Consolata Father Nicholas Makau, who was thrust into the centre of the Jan. 15-16, 2019, al-Shabab attack on an upscale office complex in Nairobi’s Westlands area – said time has given him a chance to process events, and he shared some thoughts on how priests in similar situations can respond.

Father Makau advised priests who find themselves approaching a crisis situation to pray, invoking God in silence and making themselves part and parcel of the situation. He also advised them to exercise extreme sensitivity, so they do not increase the people’s grief.

“We are priests and human. So, when consoling the people or grieving with them, one can grieve to the point of losing control. Sensitivity helps understand that we are human and we can grieve,” he said.

However, he urged priests to try to keep an emotional distance so that they can offer true consolation to strengthen the people.

“In my case, these were my Christians. I had already known their families. So I had to take myself out of the situation so that I empathized with them as an outsider. It is not an easy thing,” he said.

Father Makau also encouraged priests in similar situations to carry a “humanitarian bag” in case they have to anoint dying people or offer spiritual support. Material issues also come into play, he said.

For instance, “some family members of the victims could not afford to move from one hospital to another in search of their relatives,” said Father Makau.

The 2019 attack was just yards from the Consolata Missionaries’ regional house. As news of the attack spread, Father Makau said, he tried to reach the people he knew in the complex. He also reached out to priests at the Consolata Shrine to find out if they had heard from other parishioners.

“One Christian called to ask me to accompany him to the scene of the attack since he was too weak to go there alone. So I called some nuns, some brothers and priests so that we can go there as a team,” he said.

Once the priests and nuns arrived, armed with Bibles and rosaries, word spread. Father Makau said devastated people searching for family members asked for prayers, especially from the Catholic sisters.

“You know … an event or activity where sisters are seen draws a lot of attention. Now that the nuns were there and were seen, the church was seen to be present,” said Father Makau.

He said he saw his role and that of other religious leaders as accompanying the people who were looking for answers, especially following the terrorist attack. He spent days offering spiritual and social support to affected families, who wondered if they had done something wrong.

“They would interact with us as religious, asking questions,” he said. “Is it the people who are not being obedient to the Lord God? Is it someone who had done something wrong in the family? This is my first born, how come has died and only got this job this year?”

He said people sought answers from religious leaders of different denominations, but that they provided answers through prayer and Bible reading.

“It worked well because could see people going through with some faith. I can recall some parents saying, ‘Well, it’s God’s way, and when God’s way has come, we want to cooperate. We cannot do anything,'” he said. Some, however, wondered if this was the best God could give the people.

He said religious leaders helped show people how God had always talked to his people, through good and bad moments. The leaders stressed that the people could not choose how God speaks to them, and this was not a punishment.

“It is about the choice and the freedom we have. God has given us the freedom to develop scientifically, but we have used it against humanity. It was the bombs and bullets developed by people which brought the damages,” he said.