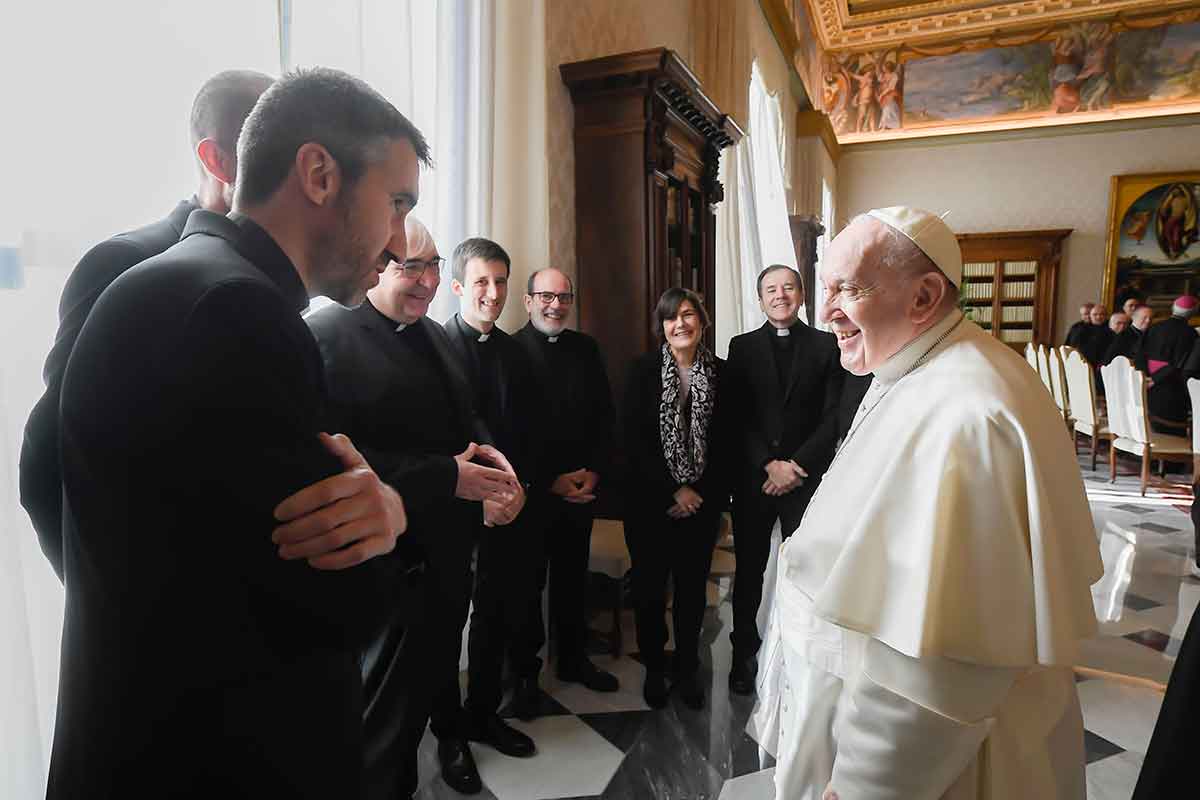 Pope Francis greets clerics as he meets Spanish bishops during their “ad limina” visits to report on the state of their dioceses, at the Vatican Jan. 14, 2022. (CNS photo/Vatican Media)

By Junno Arocho Esteves  – In the wake of a newspaper report revealing hundreds of allegations of sexual abuse in Spain, the country’s bishops assured Pope Francis that every diocese has established a commission that will investigate allegations of abuse.

Speaking with journalists Jan. 14, Spanish Cardinal Juan José Omella of Barcelona, president of the Spanish bishops’ conference, said there are no plans to establish a single independent commission, as in Germany, France or neighbouring Portugal, to conduct a nationwide investigation of the handling of cases past and present.

Instead, individual dioceses will have their own independent commissions so that survivors can easily report to their local diocese.

“What is important is that we work for the good of the victims and that (sexual abuse) never happens again,” the cardinal said.

After spending more than two hours with Pope Francis at the end of their “ad limina” visit to the Vatican, Cardinal Omella, Cardinal Antonio Cañizares Llovera of Valencia and Archbishop Joan Planellas Barnosell of Tarragona met with reporters. Theirs was the second group of Spanish bishops making the visits to report on the status of their dioceses.

In mid-December, the Spanish newspaper El Pais said it conducted a three-year investigation into sexual abuse in the Catholic Church in Spain and uncovered 251 cases of abuse dating back 80 years.

Daniel Verdu, Vatican correspondent for El Pais, said he gave the pope a copy of the report Dec. 2 during the pope’s flight from Rome to Cyprus. El Pais also delivered its findings to the Spanish bishops’ conference.

Verdu, who was among the journalists meeting the bishops Jan. 14, asked the prelates if the investigations’ findings were discussed during the bishops’ meeting with Pope Francis.

Cardinal Omella confirmed that the issue of sexual abuse and the investigation by El Pais was discussed with the pope as well as with officials at the Congregation for the Doctrine of Faith.

“At the level of a bishops’ conference, there is a service meant to help smaller dioceses who do not have staff that can help” in investigating allegations of abuse, he said. But “we felt a more human and close approach would be that each diocese have its own office and the Holy See agreed.”

He also said the newspaper’s investigation was forwarded to every diocese in Spain, as well as to religious orders since several accusations “involved schools run by religious congregations.”

However, Cardinal Omella also said that of the 31 dioceses mentioned in the report, at least five dioceses have contacted El Pais “asking for information because some do not have it. If there is an accusation against a priest, they should tell us who it is about, and we will investigate it. That is what we told El Pais.”

Cardinal Cañizares also told Verdu that the newspaper’s publishing of accusations without all of the pertinent information displayed “a lack of prudence.”

Nevertheless, Cardinal Omella said the country’s bishops felt “great sorrow” over the allegations of sexual abuse and promised that the Catholic Church will “accompany those people who have felt wounded.”