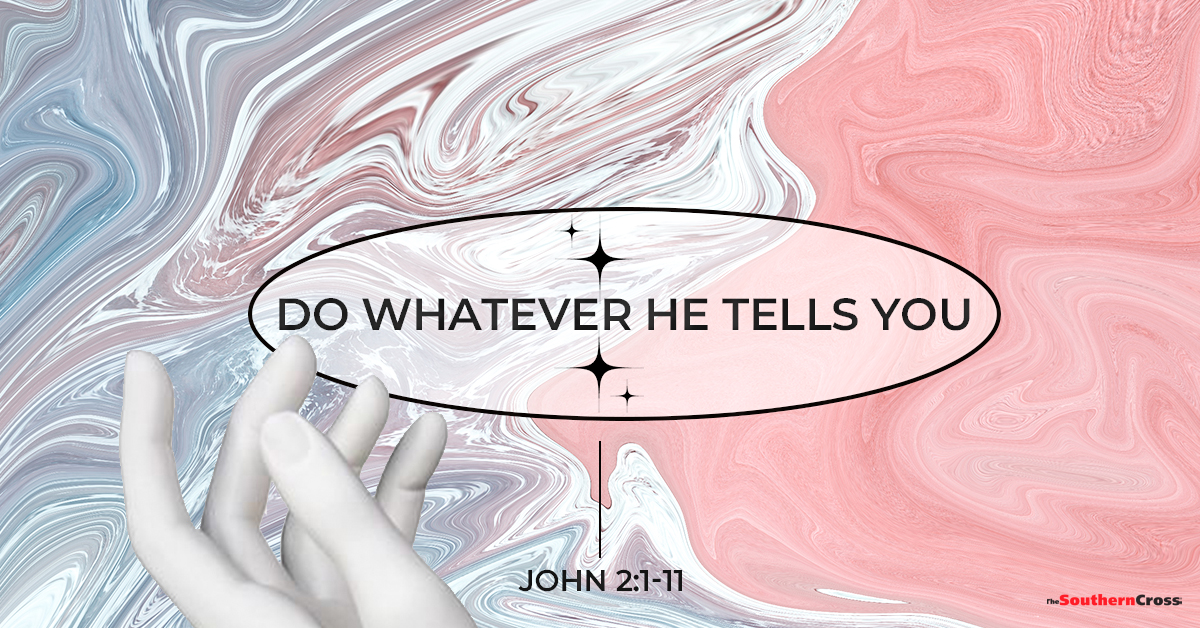 Point of Reflection: There is only one thing that is most important and a must-do to any Christian and this is the central theme of today’s Scriptural readings, Today’s liturgy marks the transition to the Ordinary Time in the Liturgical Calendar. The liturgy of this season leads us through the “ordinary” moments of Jesus’ ministry – his teaching and miracles – following the Gospel narrative. However, beyond these events, there lies a much deeper and profound reality of God’s design to make the people his own. Today’s readings describe this design through a marriage metaphor.

Sermon (Reflection):  The symbolism of marriage dominates the readings of today, mainly from Isaiah and the Gospel. The first reading comes from the third part of the book of Isaiah, written after 539 BC when the Israelites were finally allowed to return from the Babylonian exile. They waited for this moment for almost seventy years, yet, when the return was finally possible, many chose to remain in Babylon, where they had made a decent life for themselves. Those who chose to return to the homeland faced formidable challenges as they found heaps of ruins and fields of ashes, an empty and desolate land. All hopes for a speedy restoration of Jerusalem and the Temple to their former glory were quickly shattered, while discouragement, disappointment, and doubt crept in. Would God deliver on his promises of a glorious restoration proclaimed by the earlier prophets? Isaiah’s voice rises over those dark days and the ruins of the once-glorious city. With unwavering confidence, he declared the coming vindication and restoration of the city and the Temple to such magnificence, that all the nations and kings will admire its glory.

But the prophet spoke of much more than just a physical rebuilding of walls and structures. He envisioned God giving the city “a new name” which would come from “the mouth of the Lord”. In biblical terms, a change of name means a change of status, identity, and life mission. The prophet hinted that those who returned from the exile, despite their current predicament, would be fundamentally transformed. Thus, their state of being “forsaken” and “desolate” will be changed to “my delight is in her” and “married”. God plans to transform the state of desolation and abandonment into a joyful union between himself and the nation. The prophet applied the image of marriage to this reality. In the Scripture, marriage often symbolically describes the bond of love and commitment between God and his people, as is evident in the book of the prophet Hosea. This “marriage” between the Lord and Israel would create an unbreakable union in which God himself will delight.

The second reading contains an opening section of Paul’s long explanation of the nature and use of various charismatic gifts in the Corinthian community. Corinthians were prone to divisiveness and competition. They liked to make distinctions between themselves and competed for a higher status in the community based on the gifts they possessed. Among others, Paul names these gifts: wisdom, knowledge, faith, healing, working of miracles, prophecy, discernment, speaking in tongues, and the interpretation of tongues. This list shows just how gifted and diverse the Corinthian community was. However, the Corinthians often used these gifts inappropriately for self-promotion, arguing which of them was the most important one. Paul begins to deal with the problem by laying down two fundamental principles. First, he points out that all gifts come from the one and the same God through the one and the same Spirit. Second, all these gifts serve one purpose – community building. Even though each person might have a different gift, their work and ministry are an expression of the same Spirit working through them and for the same purpose. Paul implies that the divisions and arguments about the priority of gifts are ultimately foolish, and a sign of spiritual immaturity.

Still, there is another essential principle underlying Paul’s words. The presence and working of the Spirit among the Corinthians constitute decisive proof that they have become God’s children through “adoption”. This is stated explicitly in another of his letters, where he states, “you received a spirit of adoption, through which we cry, ‘Abba, Father!’” (Rom 8:15). Thus, despite their shortcomings, believers share in the divine life of the Father through the Holy Spirit. They are God’s adopted children. They are God’s family.

This particular sign was given in the context of a wedding, which suggests that its meaning will be marriage-related. Since, like in the first reading, marriage often has a symbolic meaning in the Scripture, the story of Cana is about a new bond which Jesus will establish between God and the people. Two points make this clear.

First, Jesus transforms water into wine using large jars which were normally used for the Jewish purifications. Purification was a Jewish religious rite that involved ritual washing with water, intended to remove impurity of a spiritual and religious kind. Only a pure person could approach the Holy God. By using these ritual objects but transforming the water they contained into wine, Jesus indicated that the old rites of purification would no longer be needed. Furthermore, the steward who tasted the new wine called it better than the older one. This means that, through Jesus, humanity will find a new and better way to enter a right relationship with God. Jesus will make the espousal of the people by God possible.

Second, this sign led the disciples to believe in Jesus, because they correctly interpreted what they saw. In the Old Testament, the provision of abundant and flowing wine at a great heavenly feast symbolized the restoration of the nation and its reunification with God. It was a sign of the Messianic times of eternal joy and a symbol of a renewed creation (cf. Isaiah 25:6; Joel 3:18; Amos 9:13-14). The disciples understood that this abundance of wine created by Jesus at a wedding feast was a sign that he came from God as the Messiah who will create a new union between God and his people. A union that will last into eternity.

Christian Act in Word of God “Divine Marriage at Work”

We enter the ordinary time of the Liturgical Year inspired and motivated by the image of marriage as a symbol of our relationship to God. We can understand the depth and importance of this symbol even better when we consider marriage from the traditional African point of view.

In the modern world, and also in Africa today, marriage has become primarily a union between two individuals, understood as an expression and outcome of their mutual love. However, in African traditional society marriage was seen as a union between entire extended families and even clans. Marriage was intended to create life-giving bonds between families. Various stages of the marriage process included mutual visits, dining together, negotiations, exchange of gifts, and bride-price. This complexity reflected the awareness of a developing relationship and mutual care and responsibility for the well-being of the two families. Such family-based unions tended to be much more stable and enduring than the ones made between two individuals alone. This can teach us much about our life with God and within our Christian communities.

First, we must recognize, that our relationship with God, no matter how private, must include others, it must be community-based. The God of Israel committed himself to the nation, “marrying” it as a people. The people then responded to God by living a life according to his law as a nation. Today, many wise people recognize that we are under a threat of individualism and its negative impact. Individualism has undermined not only the marriage itself but also the very nature of the Christian community. Being a Christian today is often reduced to going to Church on Sunday and fulfilling some laws and rituals which should make us right with God as separated individuals. This was never the case in the Early Church. As we saw in the second reading, Paul understood the Church as a community of individuals sharing their gifts in service to one another. Furthermore, the members were not to use these gifts to promote themselves, but to build up one another. The same happens in marriage, where individuals and families come together to build up and bring forth new life. Thus, when we “marry” our God by entering into a relationship with him through Jesus, we also “marry” his people. This means that we must be contributing community members in some way, unique to each one of us. Otherwise, our relationship with God is incomplete.

Furthermore, Jesus in today’s Gospel gives us wonderful instruction on how to build relationships based on the marriage model. In Cana, he did not have to change that water into wine. But, when he did, he made sure that the people understood that he comes from God with the mission of bringing them to God. Time and again we find ourselves in similar situations. When we see ourselves surrounded by strangers, we think that nothing is required of us. We have no sense of duty or responsibility towards strangers. But, when, as Christians, we begin to see ourselves as a part of God’s family, this changes entirely. Just as in a marriage relationship, we feel the need to do acts of unmerited and unrequested kindness or favour towards those who are members of our family. This, in turn, will lead others to recognize God acting through us. Seeing ourselves as a part of the Christian family and those whom God has espoused will bring us out of isolation and make us true members of God’s family.

Action: During this week I will think and pray to God as my intimate friend or even a spouse. How could I better respond to him within this kind of relationship?

Prayer: Lord God, you have chosen to bind yourself to us. You have chosen us for your people and have been our Father and our spouse. We thank you! Take away our isolation and self-focus so that we may respond to you and our brothers and sisters with loving and constant commitment. Amen.