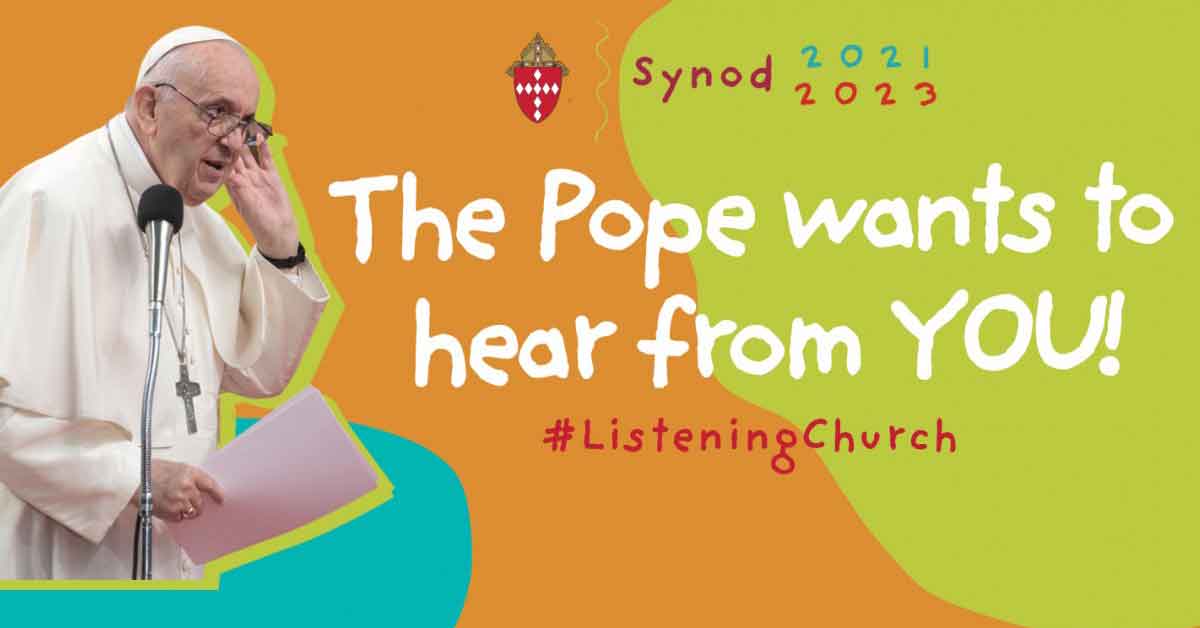 This image on the website of the Diocese of Raleigh encourages Catholics in eastern North Carolina to take an online survey. The survey is part of the listening process for the XVI Ordinary General Assembly of the Synod of Bishops. Originally scheduled for 2022, the synod will take place in October 2023 to allow for broader consultation at the diocesan, national and regional levels. (CNS photo/Diocese of Raleigh)

By Carol Glatz  –  The Catholic Church worldwide is showing good progress and “much joy” after the opening of the synodal process, but there also have been some “uncertainties” and challenges, said the ordinary council of the Synod of Bishops.

“There is growing awareness that the synodal conversion to which all the baptised are called is a lengthy process that will prolong itself well beyond 2023,” the council said in a press release on Feb. 7.

“The desire all over the world is (that) this synodal journey, which has begun at the local level,” continues “so that tangible signs of synodality might increasingly be manifest as constitutive of the church,” it said.

The ordinary council met in person and online on Jan. 26 to discuss the progress being made on the synodal process around the world and to elaborate the criteria for the “reports” to be prepared by dioceses and bishops’ conferences and submitted to the general secretariat of the Synod of Bishops, it said in a statement published Feb. 7 at synod.va.

“It seems that the novelty of the synodal process has given rise to much joy and dynamism,” it said. Nearly 98% of all bishops’ conferences and synods of Eastern Catholic churches worldwide have appointed a person or an entire team to implement the synodal process and a large number of initiatives have been set up to promote consultation and discernment.

“Many of the faithful perceive the synodal process as a crucial moment in the church’s life, as a learning process as well as an opportunity for conversion and renewal of ecclesial life. At the same time, various difficulties have also emerged,” it said.

“Fears and reticence are reported among some groups of the faithful and among the clergy. There is also a certain mistrust among the laity who doubt that their contribution will really be taken into consideration,” it said.

Among the challenges it noted were: a “reluctance” by some clergy; a need for formation, “especially in listening and discernment so that the synod is authentically a spiritual process and not reduced to a parliamentary debate”; a need for mutual listening based on prayer and Scripture; a need to improve the participation of young people; and the need to involve those distanced from the church.

The pandemic has also limited opportunities to meet in person, which is important for “mutual listening and communal discernment,” it said. “The consultation of the people of God cannot be reduced to a mere questionnaire.”

Last October, Pope Francis formally opened the process leading up to the assembly of the Synod of Bishops in 2023 and bishops around the world were to open the process in their dioceses soon after. The diocesan phase, which runs until August, will focus on listening to and consulting the people of God.

Documents and resources are available in a number of languages at www.synod.va and www.synodresources.org/.