Let Us Not Forget: War is Madness 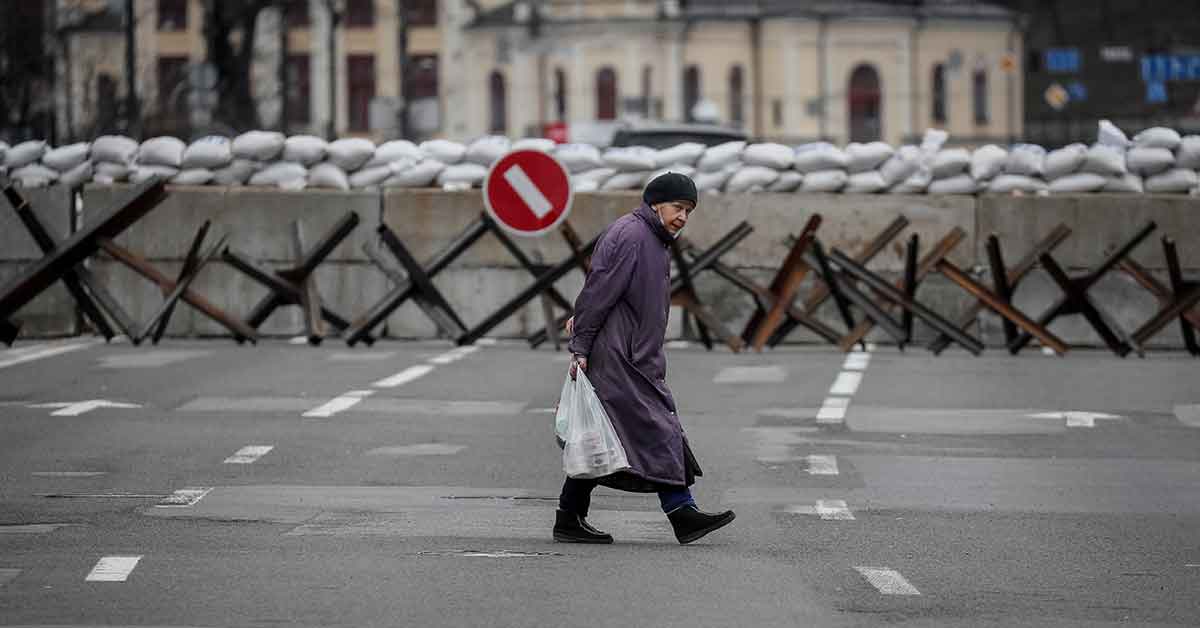 A woman crosses the street as anti-tank constructions are seen in Kyiv, Ukraine, on March 7, 2022. (CNS photo/Gleb Garanich, Reuters)

In the days leading up to President Putin’s decision to order invading Russian troops into Ukraine, Pope Francis, in an apparent effort to jolt the conscience of the Russian leader, as well as the consciences of all of us, made this appeal: “Let us not forget: war is madness.”

He lamented, “Those who wage war forget humanity. How sad it is when persons and peoples think about waging war against each other.”

And to all this madness the Holy Father boldly declared,“Put down your weapons! God is with the peacemakers, not with those who use violence.”(see: https://bit.ly/3Kb7zP0).

Tragically, the world is once again seeing, and millions of innocent Ukrainian civilians experiencing, the madness of war.

Also sadly,there are the Ukrainian soldiers who lie dead. And the Russian soldiers who reportedly were given very short notice that they were being ordered into combat to fight Ukrainians, who also lie dead(see: https://bit.ly/3C8xeow).

With NATO weapons pouring into Ukraine, together with wide economic sanctions launched against Russia, Putin has warned that his finger is on the Russian nuclear button. We are frightfully close to the ultimate madness of nuclear war.

If this scares you, good, it should! And it should scare us into fervent prayer and determined action based on Gospel-centered peacemaking.

When will we finally understand that the Gospel rejects war and violence in all its forms? The first Christians knew this well. And they lived it. Often to the point of shedding their blood instead of that of their attackers – as do over 360 million Christians today (see: https://bit.ly/3IHtHQK).

For the first three hundred years of Christianity, followers of the nonviolent Jesus renounced all blood-spilling. Their words and actions consistently, compassionately, and courageously said no to abortion, no to the death penalty, no torture, and no to war! No exceptions!

The late preeminent Catholic biblical scholar, Fr. John McKenzie said, “If Jesus does not reject violence for any reason, we do not know anything about Jesus. Jesus taught us not how to kill but how to die.”

Not just those in power, but each one of us needs to actively commit to building a new world model, a new paradigm based on the Gospel call to social justice, peace, and love.

We need to replace the current economic and political “structures of sin,” as St. Pope John Paul II labelled them – which favour the rich and powerful to the detriment of the poor and weak –with the “culture of encounter,” as Pope Francis urges; cultures of encounter which nurture universal fraternity and solidarity for the common good of all, where everyone has a seat at the banquet of life.

To help accomplish this new Gospel-based, human-centred global paradigm, we need to courageously denounce and defund all wars and armed conflicts; as well training for war, the making of weapons, the selling and transfer of weapons – in Pope Francis’ words the “diabolical and perverse logic of weapons” which, he says are far from the will of God (see: https://bit.ly/3CaoOgp). Military budgets need to be drastically cut, transferring those funds to meet desperate needs of countless poor and hungry fellow human beings.

Furthermore, it is essential that Catholic social teaching – the church’s best-kept secret – be thoroughly taught in all Catholic schools and parishes – including all seminaries which generally only require one course (see: https://www.crs.org/resource-center/CST-101).

A required time of international Peace Corps type service or religious service like Maryknoll Lay Missioners (see: https://mklm.org/) would also be instrumental in helping us to see the other as brother and sister.

St. Pope John Paul II summed it up well: “Today, the scale and horror of modern warfare – whether nuclear or not – makes it totally unacceptable as a means of settling differences between nations. War should belong to the tragic past, to history; it should find no place on humanity’s agenda for the future.”