What is the Cross on Our Cover? 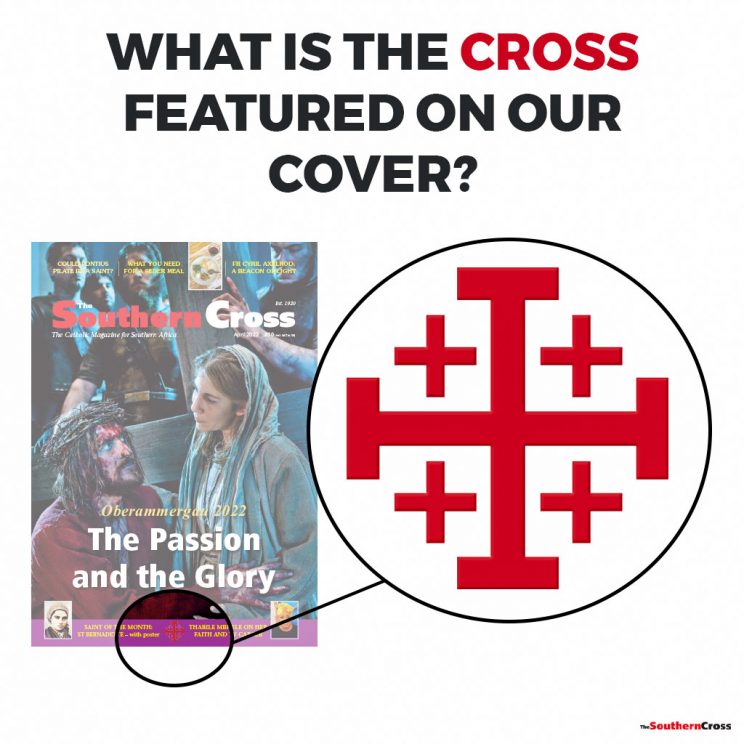 Question: I’ve noticed that each month, the cover of The Southern Cross features a cross with four smaller crosses. What do these crosses denote, and why are they depicted on your covers?

Answer: The image you refer to is the Jerusalem Cross, which in the Holy Land represents the Catholic Church and the Franciscan Custody of the holy sites.
There is no consensus on the symbolic meaning of the five-fold cross. Some say it represents Christ (the big central cross) and the four Evangelists. Others suggest it stands for the five wounds of Jesus, and another interpretation suggests that it is Christ and the four corners of the world.
The oldest known of these interpretations is that of the five wounds, dating back to the consecration of St Brelade’s church on the English Channel island of Jersey, before 1035. In the 12th century, it was used on English coins minted under King Henry II.

The five-fold cross was also on the papal banner presented by Pope Urban II at the beginning of the First Crusade in 1095, but it wasn’t adopted as the official symbol of the Kingdom of Jerusalem until about 1285, just six years before the final defeat of the Crusaders by the Mamluk Muslims.
After the final expulsion of the Crusaders, the association of the Jerusalem Cross with the Holy Land was kept alive. It was incorporated in the coat of arms of the Franciscan Custody of the Holy Land. The pontifical Order of the Holy Sepulchre also uses the Jerusalem Cross as its emblem, in red, which is also used in the arms of the Custodian of the Holy Land, which supports the Order.

And it isn’t only Catholics who have adopt the Jerusalem Cross. It has also been used by various Protestant entities over the centuries. England’s King Edward VII, the head of the Church of England, even had a tattoo of a Jerusalem Cross on his arm (he had it done in Jerusalem in 1862, when he was the crown prince). The Jerusalem Cross also features on a national flag: since 2004, it is flown in the former Soviet republic of Georgia.

And what is the Jerusalem Cross doing on all our covers since the April 2021 issue? Well, it was a reader’s idea that our covers should feature a cross in some way to express our Catholic identity. We agreed that this was a good idea, and chose the Jerusalem Cross to indicate our special closeness to the territory in which Our Lord was born, worked, died and rose again: the Holy Land.
(Günther Simmermacher)