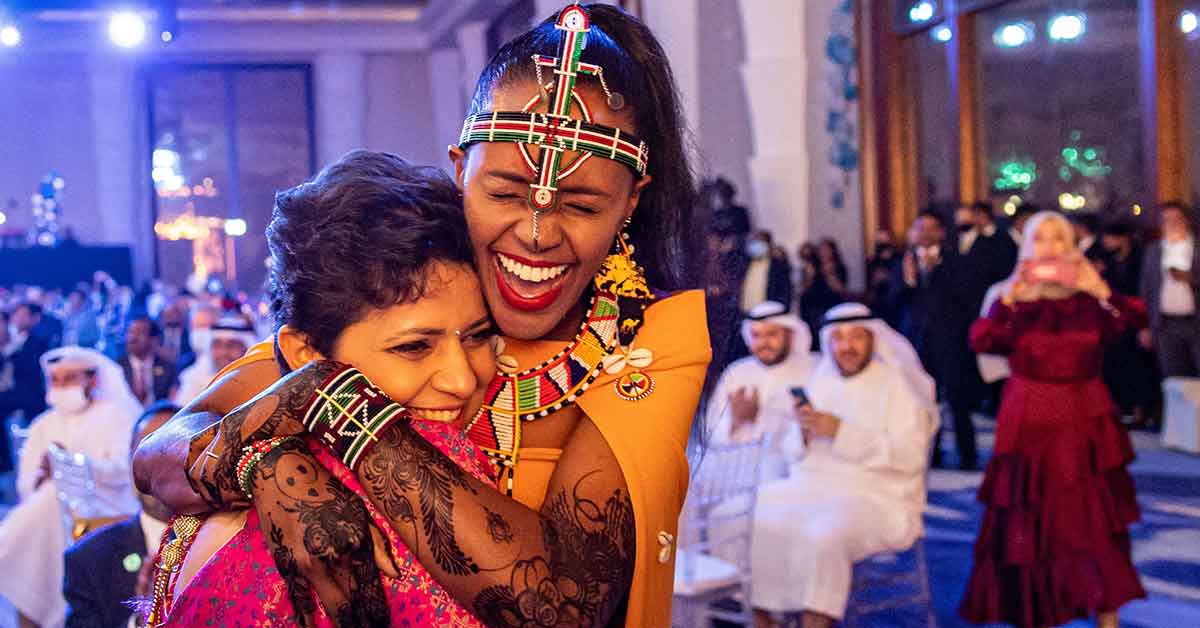 By Fredrick Nzwili – At a school in the Turbi area in northern Kenya, children clear out by midday, and in come the parents, who are learning to read.

Nearly 80% of the region’s population is illiterate, but Turbi Pioneer School is bringing about change, with children transitioning from one class to another. The parents are working hard: learning to write their names, do simple arithmetic or even save numbers on mobile phones.

This is the work of Anna Qabale Duba, 31, a Catholic mother of two and a professional nurse who won the inaugural Aster Guardians Global Nursing Award on May 12.

Duba, who works at the government referral hospital in the northern Kenyan town of Marsabit, received the $250,000 award at an event in Dubai, United Arab Emirates, on International Nurses Day.

“I have dedicated this award to peace in my region,” Duba, a Catholic, told Catholic News Service in a telephone interview May 16. “Catholics are for humanity and peace. That has also influenced what I do.”

Duba believes she was awarded for her work in education in the remote region. She has been going the extra mile to provide education in a predominantly nomadic herder community where literacy levels are very low.

“My focus is education. I am who I am and where I am today because I got an education,” said Duba, who hopes to increase the work against illiteracy with the prize money.

Turbi, a region near the Kenyan–Ethiopian border, has been the scene of deadly battles involving ethnic communities feuding over resources in Marsabit County. One such incident occurred July 12, 2005, when at least 60 people – including 12 children – were slaughtered in a morning ethnic raid that became known as the Turbi Massacre. Many years later, ethnic tensions still continue to threaten peace in the area.

Duba lost many family members, which inspired her to study nursing.

“Many lives would have been saved if there were health facilities. I lost many family members. That inspired me to want to help my people,” said Duba.

She also has campaigned against harmful cultural practices such as female genital mutilation, or circumcision, and early girl-child marriages in the community. Nearly all girls in Turbi have undergone circumcision by the age of 12, and Duba said she went through it.

“Being a nurse and having seen what these women go through when giving birth, I decided to champion against it,” said Duba, explaining that the foundation involves everyone, with priests and sheikhs speaking against the harmful practices.

“The early marriages are still there, but I am telling them (community) to take their girls to school, because school delays these marriages,” added Duba, the first woman in her village to attain a university degree.

Her passion for working with the communities started in 2013 when she was named Miss Tourism Marsabit County. The work further accelerated in 2014 when she was crowned Miss Investment Kenya. After this, she decided to go back to the village to empower her communities.

So that she could have something sustainable, Duba started a school and named it Turbi Pioneer, since she had been a first in so many things in her village.

Duba also runs the Qabale Duba Foundation, which champions the rights of Kenyan women and girls.

The foundation’s programs include providing sanitary supplies and undergarments; offering mentorship programs, including having motivational speakers visit schools; and programs on safe motherhood, where the foundation trains traditional birth attendants on safe deliveries and urges them to advocate for hospital deliveries. It also fights against female genital mutilation and early marriages and carries out peace initiatives.

Father Christian Pista, a priest at Turbi Mission in Marsabit Diocese, called the award “a moment of joy.”

“We want to see her continue with the work, to fight for the human rights, to fight for the girls and for the women,” said the priest. “The church has invested a lot in education, invested in health and so many social aspects of the human. So the work of so many old missionaries is now visible.”

Bishop Peter Kihara Kariuki of Marsabit said the church and partners working for peace were inviting Duba to become the voice that calls the people to unity, peace and reconciliation in Marsabit County.

“This shows that whatever is the situation in Marsabit, we still have winners,” said Bishop Kariuki. “God is bringing these blessings in Marsabit, when we are in this situation (drought and conflict). Then, we need to look at this and say that God wants us to do something better.”

He said the church wants to work with Duba for peace and reconciliation so that “all of us can team up, not those religious, but those who have been touched by God’s love and grace in order to help those who are not able to do.”