For Sculptor, Clay Becomes an Instrument of Healing 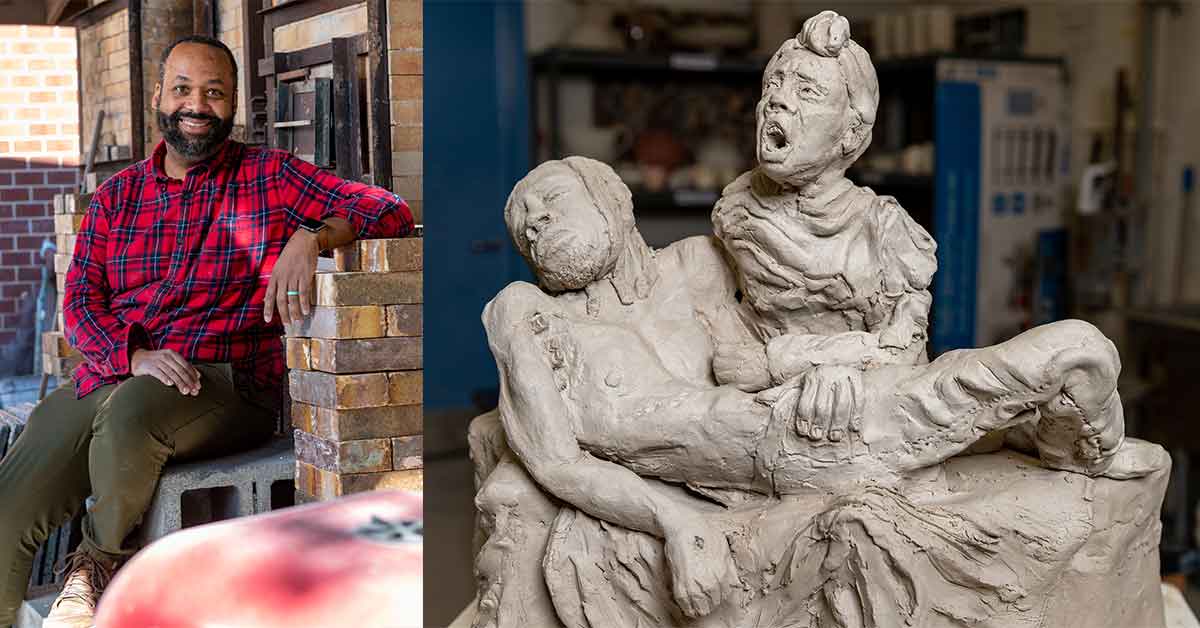 (Left) Sculptor Wayman Scott IV is seen in this Oct. 1, 2021, photo. A parishioner of the Church of the Nativity in Timonium, Md., Scott is based out of the Baltimore Claywork ceramic studio. (CNS photo/Kevin J. Parks, Catholic Review). (Right) Wayman Scott IV’s Pietà includes an image of a mournful mother whose anguished face was inspired by the murder of the daughter of one of Scott’s friends. (CNS photo/Kevin J. Parks, Catholic Review)

By George P. Matysek Jr. – Wayman Scott IV couldn’t sleep. Even as a professional grief counsellor at Gilchrist Hospice whose job is to help others grapple with loss, the 43-year-old husband and father was reeling from news of the murder of the daughter of one of his colleagues.

“I knew the agony I felt was 10 times worse for my friend,” remembered Scott, a parishioner of the Church of the Nativity in Timonium, Maryland, and an up-and-coming African American artist.

In his anguish, Scott drove to Baltimore Clayworks, where he had been working on a sculpture similar to Michelangelo’s famous Pietà showing Mary cradling her lifeless son. Scott had already largely finished the image of Christ and the body of Mary, but hadn’t started on Mary’s face.

Through tears in an empty studio late at night, Scott pressed fingers into clay. With the loss of his friend’s daughter consuming his mind, he steadily transformed a lump of earth into the countenance of a mourning mother.

Unlike the Italian Renaissance sculptor’s serene Mary, Scott’s depiction shows a woman with her mouth open in a scream. The African American figure’s brow is furrowed as she gazes heavenward, away from the dreadlocked Jesus she clutches with both arms.

Scott said he normally has difficulty sculpting without looking at some representative figure.

“I don’t know whose face this is,” he said, gesturing to Mary’s anguished visage in his miniature Pietà. “I almost find this to be a miracle because it just came to me in the middle of the night in my pain.”

For Scott, art is a way to cope with the challenges of life. In his hands, the medium of clay becomes an instrument of healing.

Scott was a third grader at Phelps Luck Elementary School in Columbia, Maryland, when his teacher asked students to make clay figures. As Scott set to work, his classmates began gathering to watch. Dazzled by the realistic triceratops that took shape in Scott’s hands, they asked him to make something for them.

“For me, it was just natural,” he remembered. “I couldn’t understand why they couldn’t make a face or a dog or a dinosaur if they wanted.”

Scott cultivated his talent, taking fine arts courses at Towson University while completing a degree in political science. He felt called to youth ministry as a young adult, spending several years as the youth minister of St. John in Columbia, his home parish.

Experiences of grief had a way of continually shaping the direction of the young man’s life.

While Scott was at Towson, his mother, Carolyn Jean Scott, was diagnosed with amyotrophic lateral sclerosis. A Fulbright Scholar who specialised in African American history, Carolyn Scott saw her health decline steadily until her death in 2017. Her son was so devastated he gave up his art.

The loss of his mother, together with the murder of a young man who gave a presentation on a drug-prevention program at St. John and the suicide of a friend led Scott to devote his life to helping others cope with loss.

After completing the necessary certifications, he first worked as a chaplain at Gilchrist before taking on his current role as a grief counsellor there.

While counselling a dying man at Gilchrist – who also happened to be an artist – Scott found himself challenged for abandoning art. The man had been impressed with Scott’s elaborate cake sculptures he had made for various events at Gilchrist, and he insisted that Scott take up sculpting with clay again.

“When a dying man very firmly tells you to do something, you tend to listen,” Scott remembered.

Father Robert Albright, a former Catholic chaplain at Towson University who prepared Scott to receive the sacrament of confirmation, said his friend has a concern for justice.

The priest recalled how in college, Scott shared how as a Black man he had to be extra cautious about simple things such as obeying traffic rules.

“I think he has a need to excel and rise above the problems of the caste system into which Black people are born,” Father Albright said.

Much of Scott’s work honours his African American heritage. His Pietà symbolically draws attention to young Black men who lost their lives during encounters with police. Scott said he will soon craft a life-size version of the sculpture, an ambitious undertaking that will involve firing huge pieces of the figure in a large, gas-powered kiln at Baltimore Clayworks.

Kevin Rohde, artist and children’s programme manager at Baltimore Clayworks, said it is perilous to work with clay on the scale Scott intends.

“It has to get cooked to 2,100 degrees F (1,150 degrees C), so there’s some stress that goes on in that process,” said Rohde, an art instructor at Towson University and a parishioner of St. Alphonsus Rodriguez in Woodstock, Maryland. There’s a real possibility work could be destroyed in the process.

Rohde called Scott “up to the challenge.”

Scott’s sculptures have a realistic quality to them, Rohde said.

“Anyone can make a human figure that comes out looking inorganic, with almost a stiffness or rigidity,” he explained. “Wayman’s work takes it to the next level. It has that something within that you can see – just a spirit and a life to it.”

“He doesn’t conceal the tool marks on the figures he’s sculpting,” Rohde said.

Using $1,500 he received as the 2021 awardee of the Mary E. Nyburg Fund for Artist Development, Scott is planning to create a ceramics project at an East Baltimore public school where children come from neglected parts of the city plagued with violence. Many of them have lost loved ones to COVID-19 or have been displaced during neighbourhood redevelopment, Scott said.

“If we’re going to heal the city, I don’t see how that happens without creative arts,” he insisted. “I want to create something permanent for them – to show them that although change has been forced on them at tender age, you still have the power to build something new.”

Matysek is managing editor of the Catholic Review, news outlet of the Archdiocese of Baltimore.