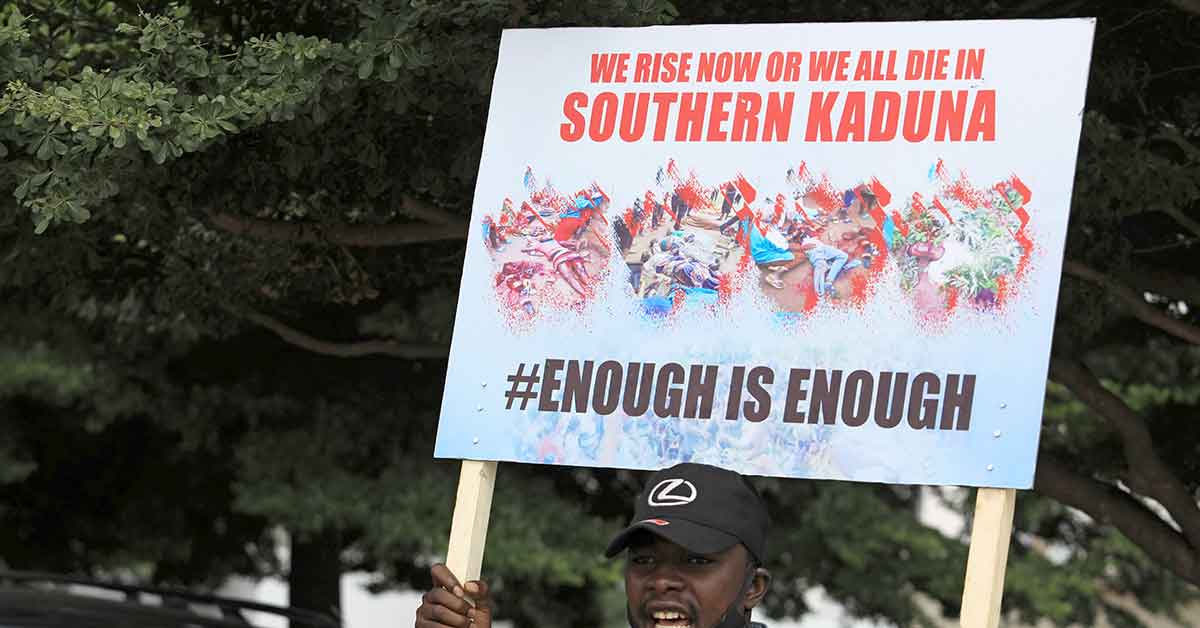 A man holds up a sign against killings in southern Kaduna state and insecurities in Nigeria during a protest in Abuja Aug. 15, 2020. The Archdiocese of Kaduna announced May 12, 2022, that Father Joseph Aketeh Bako, a priest kidnapped in March, was killed by his captors. (CNS photo/Afolabi Sotunde, Reuters)

By Junno Arocho Esteves – A Nigerian priest kidnapped In March died while in captivity, according to the Archdiocese of Kaduna, Nigeria.

In a statement published May 12 by Fides, the news agency of the Congregation for the Evangelisation of Peoples, Father Christian Okewu Emmanuel, archdiocesan chancellor, said Father Joseph Aketeh Bako died “at the hands of his captors between April 18 and 20, 2022.”

Father Bako was kidnapped March 8 after armed terrorists attacked the parish rectory in Kudenda, a village outside Kaduna.

According to Father Emmanuel, Father Bako’s brother, who was visiting him the night of the kidnapping, was killed “in his presence” by the attackers.

At the time of the kidnapping, Father Bako had been ill for some time and, after witnessing his brother’s death, “his condition worsened and he died,” the chancellor said.

“We have not recovered the body, but we have confirmation of death. The people who were kidnapped with (Father Bako) saw him die,” he said.

Kidnappings are often used by terrorists in the country as a means of extorting money from families, the government and churches. In late April, Nigerian lawmakers passed a bill amending the country’s terrorism laws and preventing the paying out of ransoms.

If signed into law by Nigerian President Muhammadu Buhari, the legislation would make the paying out of ransoms punishable with up to 15 years in prison.

While lawmakers say the measure is meant to prevent money laundering by terrorist organisations in the country, human rights organisations argued the law does little to solve the problem.

In an interview published April 28 by The Associated Press, Osai Ojigho, director of Amnesty International in Nigeria, said the bill creates “more opportunities for further violations of people’s rights.”

Ojigho said authorities should instead combat the “root cause” of kidnappings rather than “criminalising family members who are distressed by the abduction of their loved ones.”