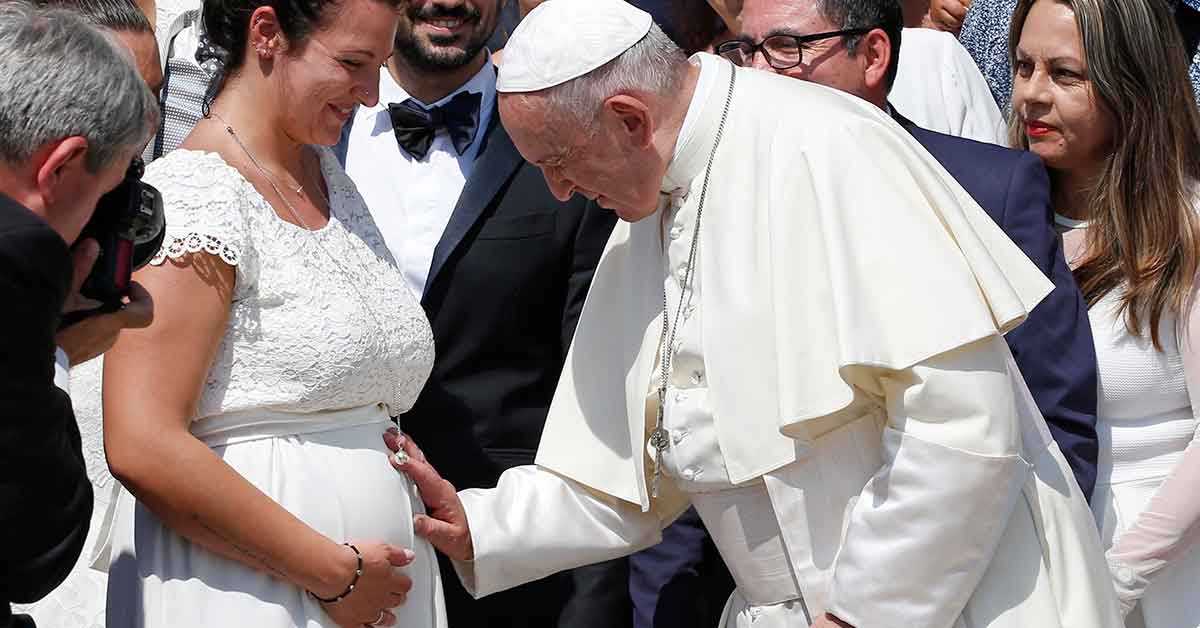 Pope Francis blesses the womb of a pregnant woman during his general audience in St. Peter’s Square at the Vatican June 5, 2019. In a message sent May 12, 2022, to participants of a conference in Rome, Pope Francis said declining birth rates in Italy and Western countries are “impoverishing everyone’s future.” (CNS photo/Paul Haring)

By Junno Arocho Esteves – The steady decline of birthrates across Europe and the West are signs of a new form of poverty that deprives humanity of a future, Pope Francis said.

Families unable to have children and young people who struggle with having a family due to economic hardship or the allure of “mediocre substitutes” risk turning the “beauty of a family full of children” into a “utopia, a dream that is difficult to fulfil,” the pope said in a message sent May 12 to participants of a conference on low birthrates in Italy.

“This is a new poverty that scares me,” he said. “It is the generative poverty of those who discount the desire for happiness in their hearts, of those who resign themselves to watering down their greatest aspirations, of those who are content with little and stop hoping for something great.”

According to the national statistics agency, ISTAT, Italy’s birthrate hit an all-time low with 399,431 births in 2021 compared to 404,892 in 2020. Italy, Malta, Spain, Greece and Luxembourg have the lowest fertility rates in Europe.

The two-day “General State of Birth Rates” conference, its website stated, aims to “make proposals to reverse the demographic trend” in Italy which has “worsened by the effects of the COVID-19 pandemic.”

In his message, the pope said that the decline in birthrates is a “very urgent problem” and that the failure to see it as a problem “is shortsighted attitude” that views the issue as “too complex and that nothing can be done.”

Recalling the conference’s theme, “It can be done,” the pope said it is a hopeful approach “against numbers that inexorably get worse each year.”

“‘It can be done’ means not passively accepting that things cannot change,” he said.

“Things can change if we engage each other without fear, going beyond partisan interests and ideological fences,” the pope said. “The data, the forecasts, the numbers are now known to all: we need concreteness. It is time to give real answers to families and young people. Hope cannot and must not die waiting.”