Pope: Poverty Driving Children into Forced Labour Must be Tackled 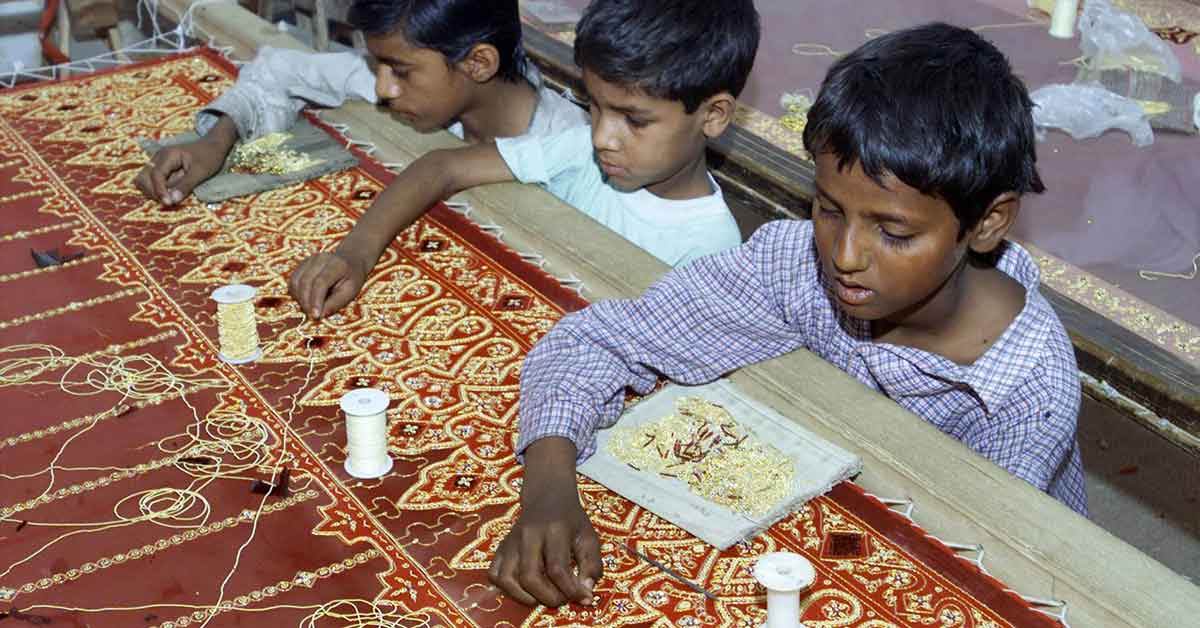 Children work inside an embroidery shop in Multan, Pakistan, in this June 12, 2003, file photo. Child labour exploitation is rooted in poverty, scandalous inequality and lack of opportunities that protect human dignity, Pope Francis wrote in a message to a global conference on the fight against child labour on May 17, 2022. (CNS photo/Asim Tanveer, Reuters)

By Carol Glatz – Poverty and inequality, which are major factors in child labour exploitation, must be addressed, Pope Francis said in a written message.

“Sadly, too many small hands are busy ploughing fields, working in mines, travelling great distances to draw water and doing work that prevents them from attending school, to say nothing of the crime of child prostitution, which is robbing millions of children of the joy of their youth and their God-given dignity,” the pope wrote in a message to a global conference against child labour.

“Since poverty is, in fact, the chief factor that exposes children to labour exploitation, I am confident that your deliberations will not fail to address the structural causes of global poverty and the scandalous inequality that continues to exist among the members of the human family,” the pope told conference participants.

Pope Francis’ message was addressed to Guy Ryder, director-general of the International Labour Organization, on the occasion of the fifth Global Conference on the Elimination of Child Labour being held May 15-20 in Durban, South Africa. Archbishop Peter B. Wells, apostolic nuncio of South Africa, read the pope’s message to the assembly on May 16.

Sending his “warm greetings and prayerful good wishes” to those attending the conference, the pope said he hoped the conference would raise awareness and promote a commitment to combating the problem of child labour.

“While significant progress has been made in eliminating the scourge of child labour from society, this tragedy has been worsened by the impact of the global health crisis and the spread of extreme poverty in many parts of our world where the lack of decent work opportunities for adults and adolescents, migration and humanitarian emergencies condemn millions of young girls and boys to a life of economic and cultural impoverishment,” he wrote.

Pope Francis wrote that he hoped the conference would lead to greater commitment from relevant leaders and international and national organizations in “working to find appropriate and effective ways of protecting the dignity and rights of children, especially through the promotion of social protection systems and access to education on the part of all.”

“The way we relate to children, the extent to which we respect their innate human dignity and fundamental rights, expresses what kind of adults we are and want to be and what kind of society we want to build,” he wrote.

The Vatican is committed to working in ways that help the international community persevere in its efforts to fight child labour exploitation “so that children will be able to enjoy the beauty of this stage of life, while also cultivating dreams for a bright future,” the pope wrote.

The World Day Against Child Labor will be marked June 12 and have the theme “Universal Social Protection to End Child Labor.”

A report released by the International Labor Organization and UNICEF in 2021 estimated some 160 million children – almost one in 10 – worldwide were caught up in forced child labour, an increase of 8.4 million children over the previous four years.