Pope tells Russian Patriarch they are not ‘Clerics of the State’ 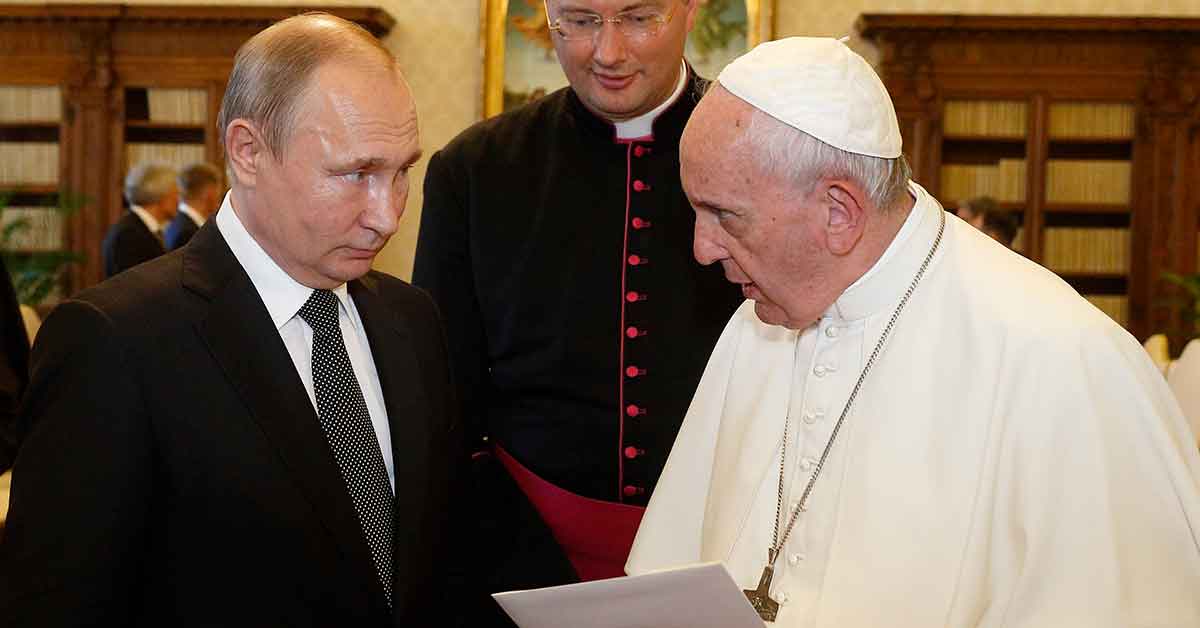 Father Visvaldas Kulbokas, centre, serves as translator as Pope Francis and Russian President Vladimir Putin exchange gifts during a private audience at the Vatican in this July 4, 2019, file photo. In an interview with the Italian newspaper Corriere della Sera, published May 3, 2022, Pope Francis said he would like to go to Moscow to meet Vladimir Putin in an attempt to end the conflict in Ukraine. (CNS photo/Paul Haring)

By Carol Glatz – Warning that the Russian Orthodox patriarch should not “turn himself into Putin’s altar boy,” Pope Francis also said he would like to go to Moscow to meet Vladimir Putin in an attempt to end the conflict in Ukraine.

The pope reiterated that he would not be going to Kyiv “for now,” but “I first must go to Moscow, I must first meet Putin,” he said in an interview with the Italian newspaper, Corriere della Sera, published May 3. Vatican News also published most of the interview.

Pope Francis said he sent a message through Cardinal Pietro Parolin, Vatican secretary of state, “20 days after the war” started, to be delivered to Putin telling him, “I was ready to go to Moscow.”

“We still have not had a response, and we are still being persistent, even though I am afraid Putin may not be able to and may not want to have this meeting right now,” the pope said. “I am doing what I can. If Putin were to open the door. …”

“But so much brutality, how do you not try to stop it? We saw the same thing with Rwanda,” he said, referring to the genocide against members of the Tutsi minority ethnic group in 1994, when at least 500,000 people were killed in about 100 days.

Pope Francis also provided more details about a video call he had with Russian Orthodox Patriarch Kirill of Moscow in mid-March. “I spoke with Kirill for 40 minutes via Zoom. He spent the first 20 minutes holding a piece of paper reading all the reasons for the war.”

“I listened to him, and I told him, ‘I don’t know anything about this. Brother, we are not clerics of the state, we cannot use the language of politics, but of Jesus. We are shepherds of the same holy people of God. That is why we must seek the path of peace, to cease the blast of weapons,'” he said.

“The patriarch cannot turn himself into Putin’s altar boy,” he said.

The meeting that had been planned between the pope and patriarch in Jerusalem June 14, and has since been cancelled, had nothing to do with the conflict in Ukraine, the pope said. But even the patriarch now sees that any kind of meeting of theirs could send “an ambiguous sign.”

Patriarch Kirill has been an outspoken supporter of Putin’s war on Ukraine, and the Vatican’s diplomatic team believed such a meeting could lead to “much confusion,” Pope Francis had told La Nación, the Argentine newspaper, in an April 21 interview.

“Instead, I didn’t call Putin. I had heard from him in December for my birthday, but this time, no, I didn’t call him,” he said. He explained that he preferred to make a more “clear gesture that the whole world could see and that is why I went to the Russian ambassador” to the Holy See, Aleksandr Avdeyev, Feb. 25.

He said he asked the ambassador “that they explain, (and) I told him, ‘Please, stop this.'”

The pope said the conflict is not just affecting the Donbas region, but there is also “Crimea, it is Odesa – it is taking away the port of the Black Sea from Ukraine, it is everything. I am a pessimist, but we must do everything possible so that the war can end.”

“There is not enough will for peace. The war is terrible, and we have to shout out” against it, he said.