Sister Annie Demerjian: Syria’s economy so bad many people don’t have one meal a day 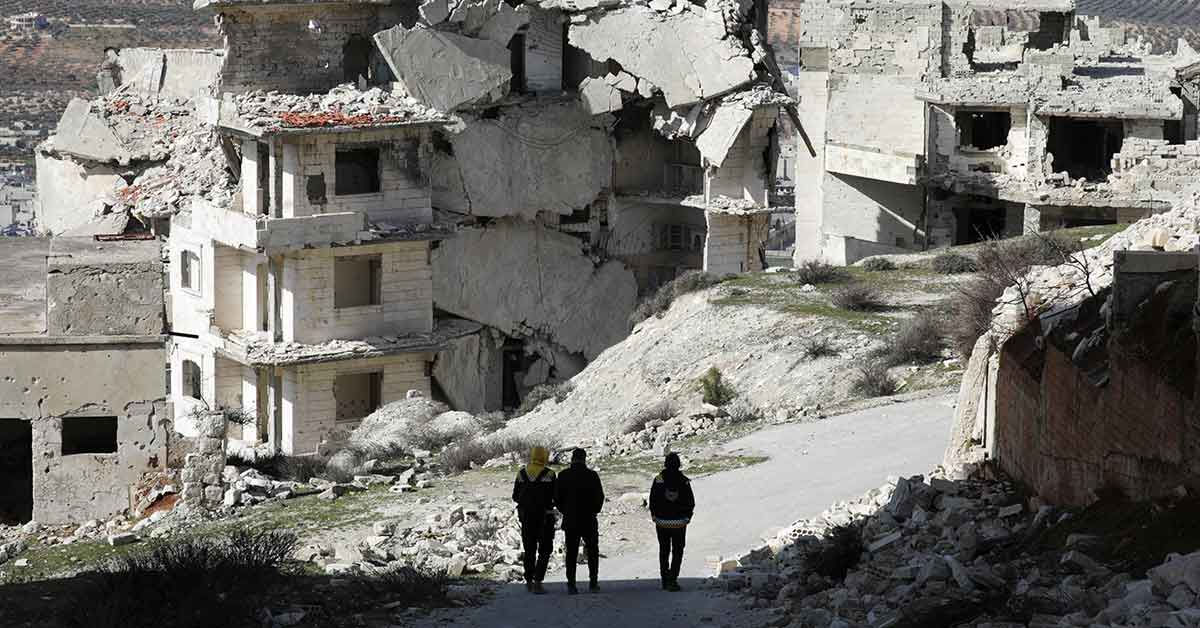 People walk past destroyed buildings in Idlib, Syria, March 20, 2022. The war is over but “Now the situation in Syria is becoming worse and worse” due to the country’s economic crisis, said a nun based in the country. (CNS photo/Khalil Ashawi, Reuters)

By Doreen Abi Raad – The war in Syria is mostly over, and not a house was unaffected, said a nun based there. But now, the economy is so bad that people look back on the war and say, “at least then we had some food to eat and we could feed our children.”

Sister Annie Demerjian, delegation councillor for the Sisters of Jesus and Mary for Lebanon and Syria, said she did not want to paint a totally dark picture, “because always there is hope.”

She said for Syrians who are employed, the monthly salary of a family is barely sufficient for one week.

“Many, many people are really hungry. They don’t have even one meal a day,” she told journalists May 25.

Sister Demerjian and Sister Helen Mary Haigh, who is responsible for the Sisters of Jesus and Mary Delegation of England, Lebanon and Syria, spoke during a virtual news conference sponsored by Aid to the Church in Need. They said Christians in Syria and Lebanon are holding on to the hope of their faith as they endure severe economic hardships.

Sister Demerjian recalled the times during the civil war that she and the sisters from her order woke early in the morning in Aleppo without electricity; she said they held a prayer book in one hand and a candle in the other.

“Many nights we didn’t sleep because of the shelling and bombs,” she said, adding that the sisters continued to visit families, often dodging bullets and bombs.

Despite the bombardments and ensuing long cuts of electricity, and at one time 35 continuous days without water, she said, “we experienced very deeply the providence of God” and “every day, every day, we experienced God’s presence.”

Although conflict continues in some parts of Syria, particularly the northwest, the situation “is becoming worse and worse” due to the country’s economic crisis, Sister Demerjian said.

She cited Cardinal Mario Zenari, apostolic nuncio to Syria, as saying that 85% of the population is now under the line of poverty.

“Many young people are determined to stay in Syria, even though they can leave. They want to (stay) to be a small light in the darkness,” said the Damascus-born nun with Armenian roots who was an engineer before answering the call to the religious life.

With support in part from Aid to the Church in Need, some young adults established Christian Hope Centers in Aleppo, Homs, Latakia and Damascus. They sponsor microprojects, job training, skills improvement for university students and after-school homework sessions for school-age children. In Aleppo, for example, 90 university graduates have obtained jobs as a result, she said.

Despite all the horrors and suffering Syrian Christians have endured, Sister Demerjian said “the churches are full, packed with people praying with a trust that they depend totally on God’s hand. And, like us, they feel that one day light will come from this darkness.”

Sister Haigh noted that she has either lived in Lebanon or visited the country for more than 30 years. “It’s very much a part of me.”

She said she never could have imagined that there would be a such a dire need for aid in Lebanon, a formerly middle-income country now engulfed in a stifling economic crisis, described by the World Bank as one of the world’s worst since the 1850s.

She noted the “dramatic” collapse of the Lebanese currency by 90% and the devastating effect it has had on the country, such that “90% of the people are extremely poor. They are feeling hunger,” she said.

For schools and hospitals run by religious orders or dioceses, “some have already closed, others are in the process of closing and others will soon have to face that possibility,” Sister Haigh said.

“We should remember that Lebanon has been a safe haven for Christians who have made up a significant proportion of the country.”

Referencing Pope John Paul II’s declaration in 1989 that “Lebanon is more than a country. It is a message of freedom and an example of pluralism for East and West,” Sister Haigh stressed: “We cannot let Lebanon fall. We cannot let Lebanon lose its Christian people. I say that with all my heart.”

“It is essential, not just for its own little bit of land, but for the hope and the promise it gives to the many other Christians in the Middle East,” she said.