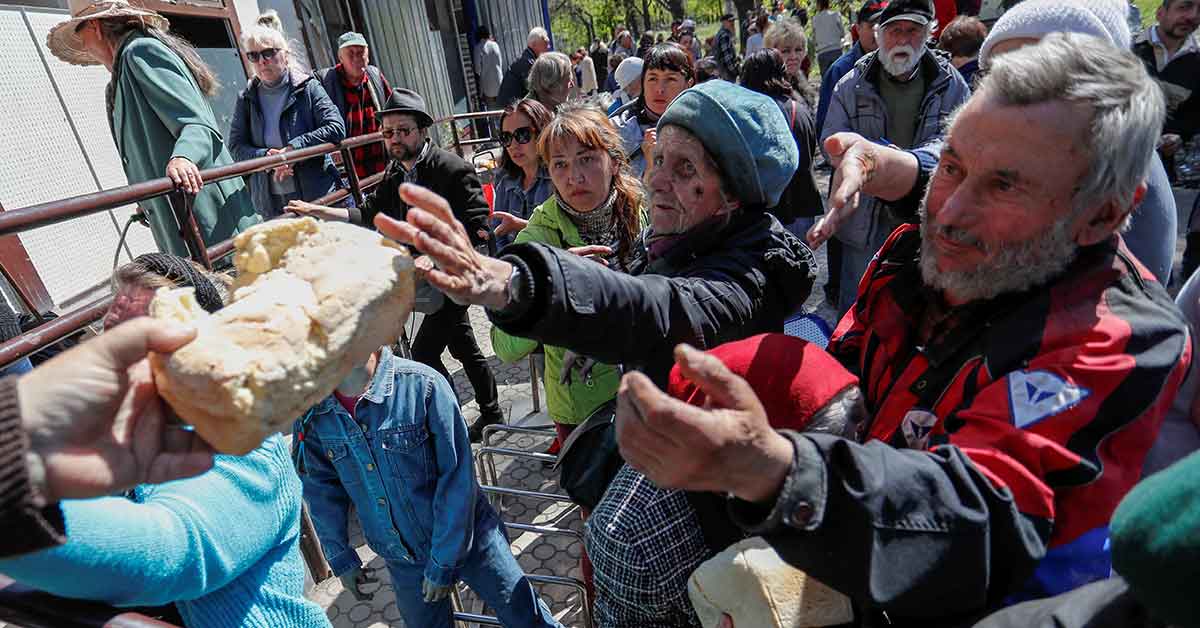 People receive bread during the distribution of humanitarian aid in the southern port city of Mariupol, Ukraine, May 8, 2022, during the Russian invasion. (CNS photo/Alexander Ermochenko, Reuters)

War is deadly. While this is an obvious fact regarding those who fight, it is less obvious regarding the life and death plight of many non-combatants trapped within battle zones.

And even less obvious are war’s deadly effects on countless poor people far removed from the fighting. The Russian-Ukrainian war is a case in point.

Normally, Ukraine is a major exporter of grains like wheat and barley to millions of people who are unable to cultivate enough food to survive. But due to the war, its shipping ports are closed.

U.N. World Food Programme Executive Director David Beasley is pleading that “Right now, Ukraine’s grain silos are full. At the same time, 44 million people around the world are marching towards starvation. We have to open up these ports so that food can move in and out of Ukraine. The world demands it because hundreds of millions of people globally depend on these supplies.

“We’re running out of time and the cost of inaction will be higher than anyone can imagine. I urge all parties involved to allow this food to get out of Ukraine to where it’s desperately needed so we can avert the looming threat of famine” (see: https://bit.ly/3L9cGPA).

Beasley also reportedly warned if the conflict in Ukraine was not ended, “the world will pay a mighty price and the last thing we want to be doing as the World Food Programme is taking food from hungry children to give to starving children.”

War, especially the Russian-Ukrainian war, is also distracting us from adequately addressing the quickly advancing deadly effects of climate change and global warming – largely due to greenhouse gases produced by the continued use of fossil fuels (oil, gas and coal).

In its recent report drawing on the research of thousands of scientists, the U.N. Intergovernmental Panel on Climate Change (IPCC), stated that to get global warming greenhouse gases under control – and thus greatly mitigate the growing fierceness of floods, droughts, wildfires, hurricanes, typhoons and other extreme weather events – governments and corporations need to quickly accelerate a total transition away from fossil fuels to clean renewable energy (like wind and solar) and plant many new forests. If we delay any longer, the catastrophic effects of climate change will be irreversible for us and future generations. The IPCC’s report bluntly warns: “It’s now or never” (see:https://bit.ly/3N6upbL).

The U.S. and its NATO allies need to stop pumping billions of dollars into the Russian-Ukrainian war –which will not aid in the defeat of the Russian military, but will instead surely guarantee that the war continues – and instead, launch fair, open-minded multilateral negotiations with President Putin, with a genuine desire to obtain an immediate ceasefire, a lasting end to the war, and full speed ahead with grain shipments to the starving!

Just day ago, U.N. Secretary-General Antonio Guterres insightfully said, “In our time – a time of conflicts, climate crisis and COVID-19 – there is simply no sustainable alternative to dialogue, international cooperation, and global solutions” – a wise and holy strategy right out of Pope Francis’ playbook!