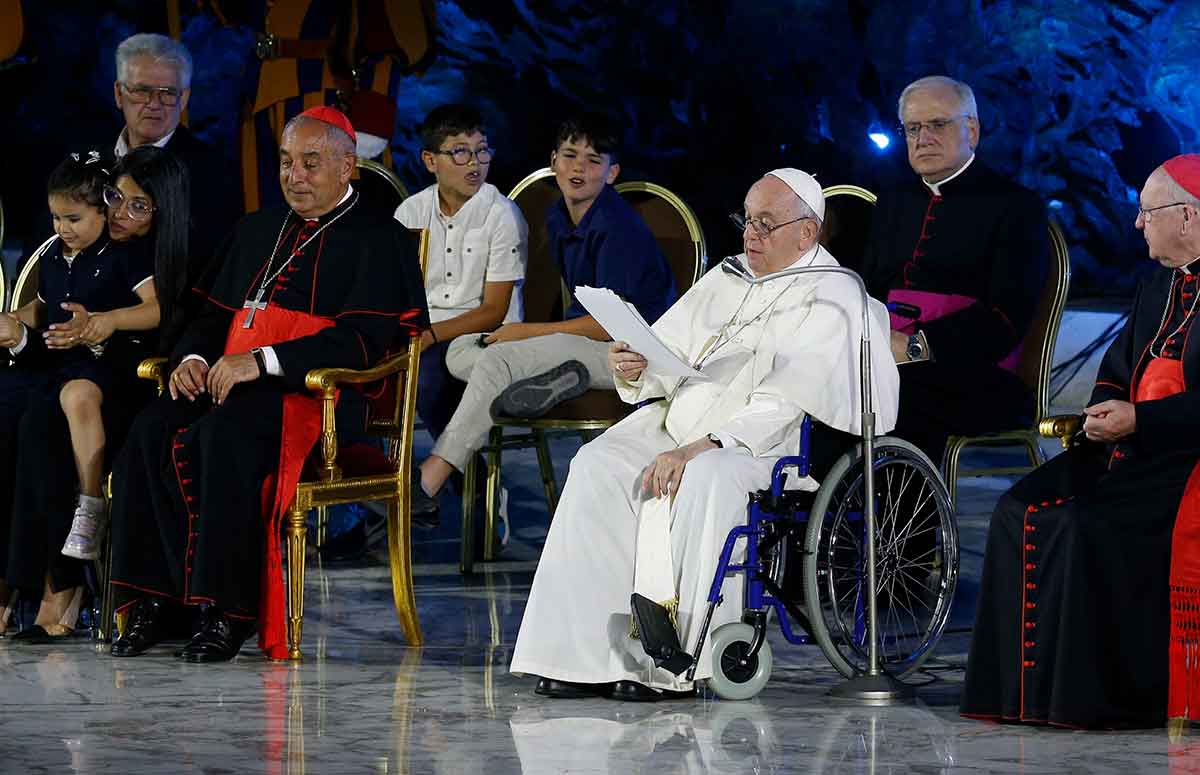 Pope Francis speaks as he opens the World Meeting of Families in the Paul VI hall at the Vatican June 22, 2022. The Festival of Families, an evening of sharing and music, was the opening event of the five-day meeting. (CNS photo/Paul Haring)

By Cindy Wooden – The Catholic Church professes marriage and family life to be a path to holiness – a daunting concept – but one that can start with a tiny step, Pope Francis said.

The in-presence portion of most of the event June 22-26 was limited to about 2,000 people – official delegates of bishops’ conferences, Catholic family associations and movements. But the entire event was being livestreamed, and parishes and dioceses around the world were holding their own events at the same time on the theme, “Family love: a vocation and a path to holiness.”

At the opening festival, with some 4,500 people in the Vatican audience hall, Pope Francis said he wanted the church to be a “good Samaritan that draws near to you and helps you to continue your journey and to take a step forward, however small.”

Cardinal Kevin J. Farrell, prefect of the Dicastery for Laity, the Family and Life, welcomed delegates to the gathering and told Pope Francis the five families – from Rome, Ukraine and Congo – that shared their stories “are not perfect families … because, as you always say, perfect don’t exist.”

“They are normal families who, like so many others, in every country and latitude, go through the difficulties and sufferings typical of our time,” the cardinal said, but they have discovered that when the problems are experienced with faith, they can open “incredible paths of family holiness.”

Serena Zangla and Luigi Franco, who have lived together for 10 years and have three children, spoke to the pope of the difficulty they had in finding a parish that would accept and support them, for which Pope Francis apologised. Zangla said they finally have found a community and are hoping to be married soon.

The sacrament of marriage is the gift God gives to couples in love, the pope said. “It is a marvellous gift, which contains the power of God’s own love: strong, enduring, faithful, ready to start over after every failure or moment of weakness.” 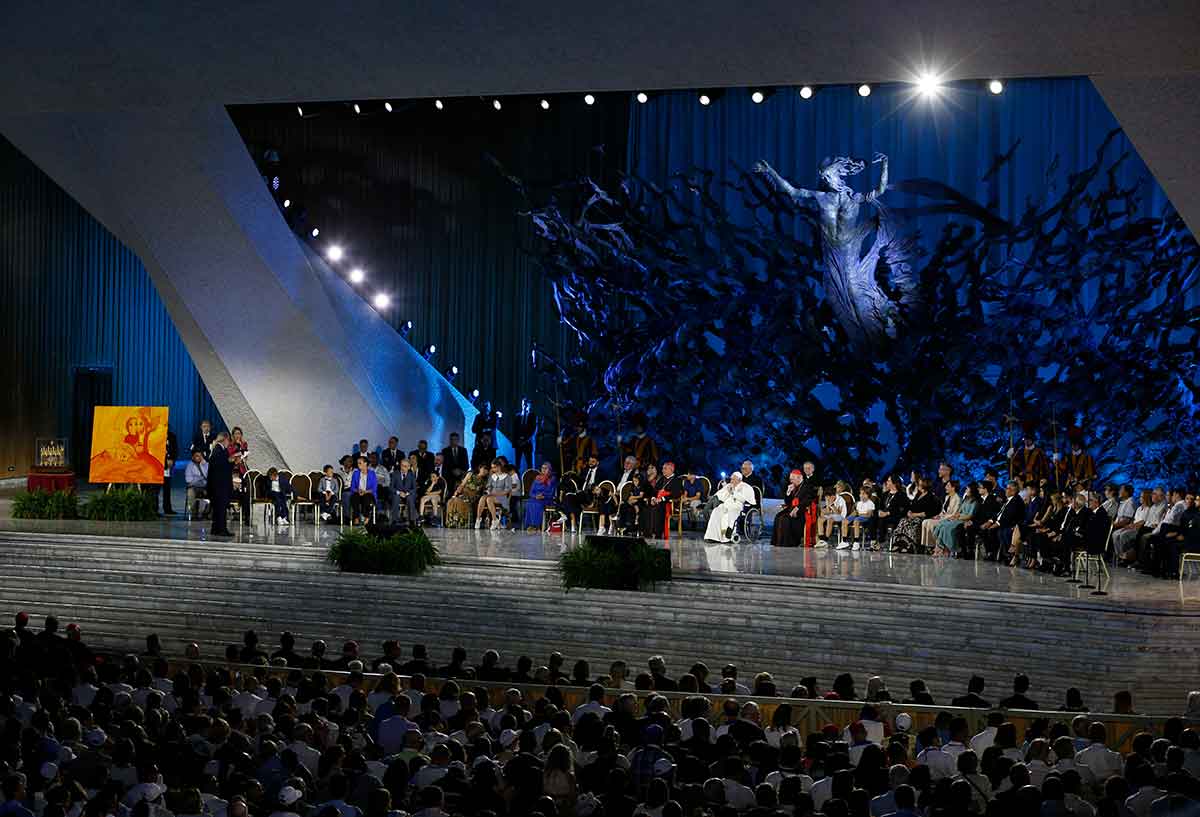 Pope Francis opens the World Meeting of Families in the Paul VI hall at the Vatican June 22, 2022. The Festival of Families, an evening of sharing and music, was the opening event of the five-day meeting. (CNS photo/Paul Haring)

“Family life is not ‘mission impossible,'” he told them. “By the grace of the sacrament, God makes it a wonderful journey, to be undertaken together with him and never alone.”

Roberto and Maria Anselma Corbella shared with the crowd the story of the illness and death of their daughter, Chiara, who eventually chose not to pursue cancer treatment so her unborn baby would live.

“To see how she experienced the trial of her illness helped you to lift up your gaze, not to remain imprisoned in grief, but to be open to something greater: the mysterious plans of God, to eternity, to heaven,” the pope said. “I thank you for this witness of faith!”

Paul and Germaine Balenza of Congo spoke of the crises in their marriage, including infidelity, and how members of the Christian Family Community helped them find the strength to forgive and begin again.

“No one wants a love that is short-term or is marked with an expiration date,” the pope said. “We suffer greatly whenever failings, negligence and human sins make a shipwreck of marriage. But even amid the tempest, God sees what is in our hearts.”

Listening to their story, the pope said he was reminded of the biblical story of the prodigal son, “only this time, the ones who went astray were the parents, not the child!”

Pope Francis congratulated the couple for celebrating a “feast of forgiveness” with their children and renewing their wedding vows at Mass, because it helped their children see “the humility needed to beg forgiveness and the God-given strength to pick yourselves up after the fall.”

Iryna Kozhushko and her daughter Sofia from Ukraine, and Pietro and Erika Chiriaco, the couple with six young children hosting them in Acilia, a suburb of Rome, also shared their stories.

The welcome offered by the Chiriaco family, Pope Francis said, shows the generosity that almost naturally comes from having a large family where people are “trained to make room for others.” 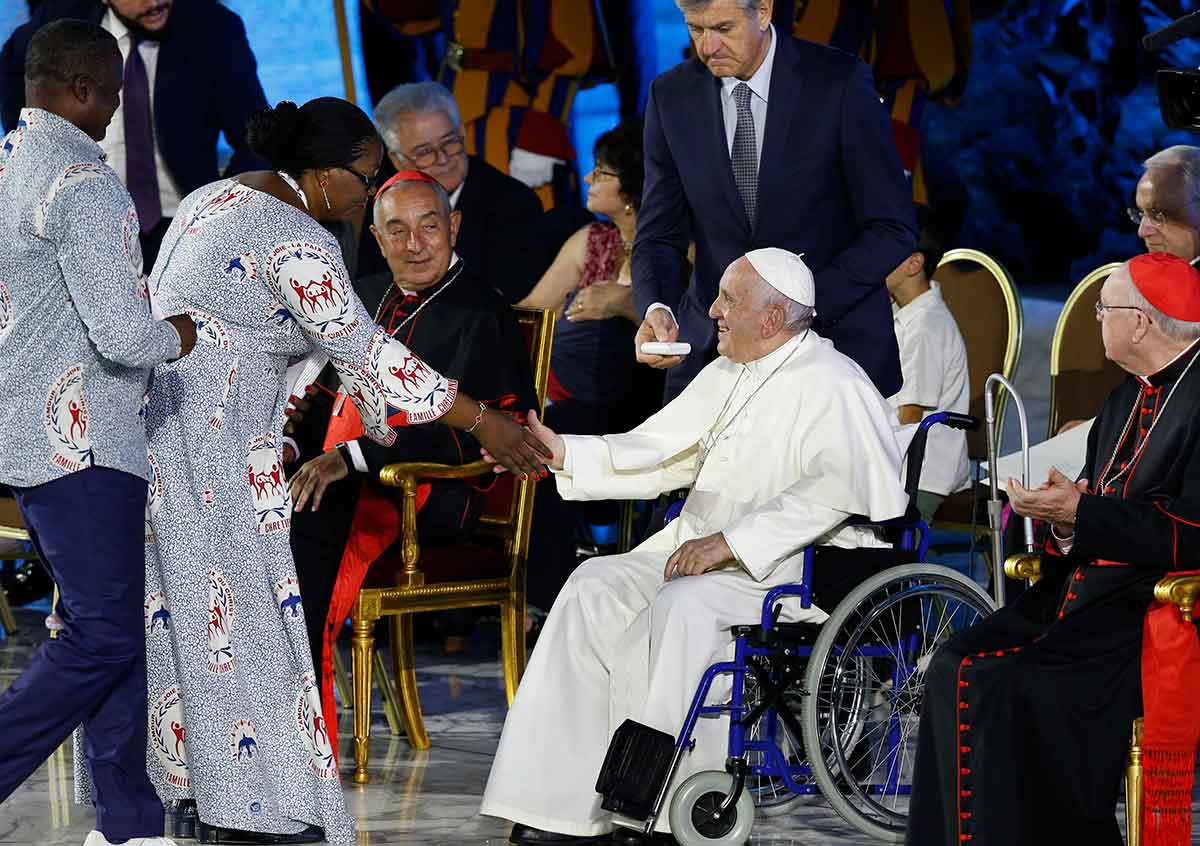 Pope Francis greets Paul and Germaine Balenza of Congo after the couple spoke at the opening of the World Meeting of Families in the Paul VI hall at the Vatican June 22, 2022. The Festival of Families, an evening of sharing and music, was the opening event of the five-day meeting. (CNS photo/Paul Haring)

“In the end, this is what family is all about. In the family, we experience what it is to be welcomed. Husbands and wives are the first to ‘welcome’ and accept one another, as they said they would do on the day of their marriage,” he said. “Later, as they bring a child into the world, they welcome that new life.”

“Whereas in cold and anonymous situations, the weak are often rejected,” the pope said, “in families it is natural to welcome them: to accept a child with a disability, an elderly person in need of care, a family member in difficulty who has no one else – this gives hope.”

Zakia Seddiki, a Moroccan Muslim and widow of Luca Attanasio, the Italian ambassador to Congo killed in an ambush in 2021 at the age of 43, also spoke at the event.

Seddiki had told the crowd, “We based our family on authentic love, with respect, solidarity and dialogue between our cultures.”

“None of that was lost, not even after the tragedy of Luca’s death,” the pope said. “Not only do the example and the spiritual legacy of Luca continue to live on and to speak to the consciences of many people, but also the organisation that Zakia founded in some way carries on his mission. Indeed, we can say that Luca’s diplomatic mission has now become ‘a mission of peace’ on the part of your entire family.”

Pope Francis praised Seddiki and Attanasio for supporting and respecting each other’s religious identities and focusing on how both Islam and Christianity called them to work “to overcome divisions, prejudices and narrow-mindedness, and to build together something grand, something beautiful, on the basis of what we have in common.”