Pope to Families: Look to the Future, Not to the Past 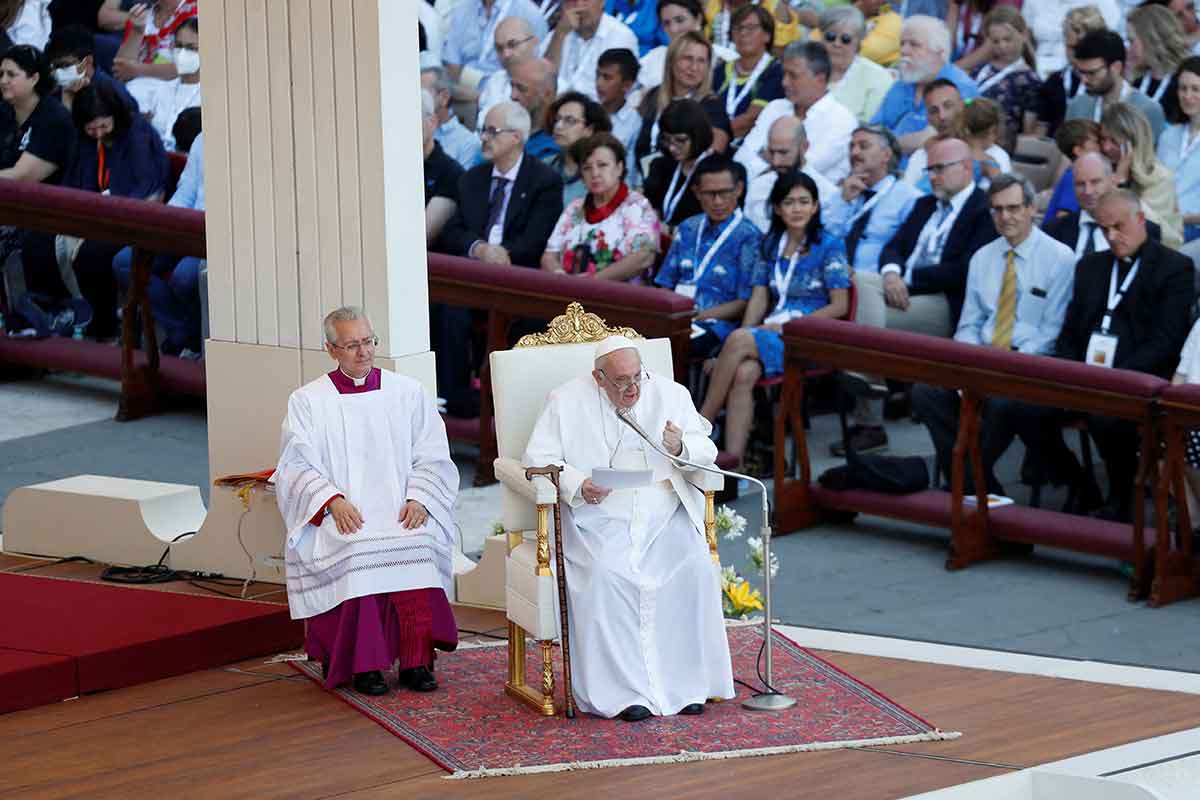 Pope Francis gives the homily during Mass in St. Peter’s Square during the World Meeting of Families at the Vatican June 25, 2022. (CNS photo/Remo Casilli, Reuters)

By Junno Arocho Esteves – Christian families are called to embark on a journey of love and service that will lead them to joy and hope for the future, Pope Francis said.

In marriage and family life, those who follow Jesus’ call will see that “he always precedes us in love and service. And those who follow him will not be disappointed,” the pope said June 25 in his homily at Mass with thousands of pilgrims participating in the World Meeting of Families.

“Dear families, you, too, have been asked not to have other priorities, not to ‘look back,’ to miss your former life, your former freedom, with its deceptive illusions. Life becomes ‘fossilised’ when it is not open to the newness of God’s call and pines for the past,” he said.

The pope participated in the outdoor Mass in St. Peter’s Square but was unable to preside over the liturgy due to problems with his knee. Instead, U.S. Cardinal Kevin J. Farrell, prefect of the Dicastery for Laity, the Family and Life, presided.

Before concluding the Mass, Cardinal Farrell announced that a “Jubilee of Families” will be celebrated in Rome during the Holy Year 2025. The cardinal said the next World Meeting of Families will take place in 2028.

“From this moment on, let us pray that these will be great events of grace that touch the hearts of thousands of families,” Cardinal Farrell said.

With temperatures soaring in Rome throughout the week, the Vatican had moved the Mass to a time later in the evening to “accommodate the participation of the faithful.” 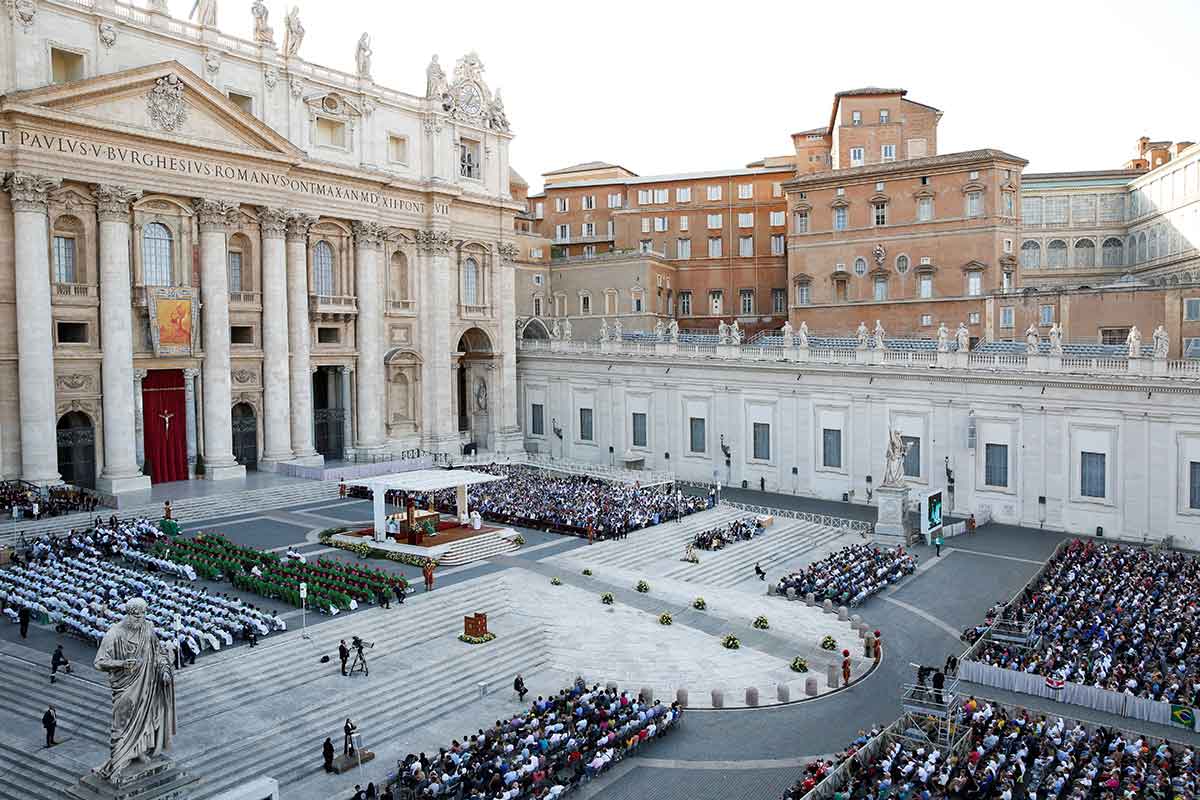 A general view is seen as Pope Francis attends Mass in St. Peter’s Square during the World Meeting of Families at the Vatican June 25, 2022. U.S. Cardinal Kevin J. Farrell, prefect of the Dicastery for Laity, the Family and Life, presided at the Mass. (CNS photo/Remo Casilli, Reuters)

Pope Francis arrived in St. Peter’s Square and, with several children aboard his popemobile, drove around to greet the families and pilgrims. He also stopped several times along the way to kiss babies that were brought to him.

In his homily, the pope reflected on the day’s second reading from St. Paul’s Letter to the Galatians, in which the apostle urged Christians to not use their freedom “as an opportunity for the flesh; rather, serve one another through love.”

While freedom remains “one of the most cherished ideals and goals of the people of our time,” the pope said, many “lack the greatest freedom of all, which is interior freedom.”

“All of us are born with many forms of interior and exterior conditioning, and especially with a tendency to selfishness, to making ourselves the centre of everything and being concerned only with our own interests,” he said.

Within the context of the family, he said, Christians are not called to be “‘planets’ or ‘satellites,’ each travelling in its own orbit” but instead are called to be a “place of encounter, of sharing, of going forth from ourselves in order to welcome others and stand beside them.”

“The family is the first place where we learn to love,” the pope said. “Let us not allow the family to be poisoned by the toxins of selfishness, individualism, today’s culture of indifference and waste, and as a result lose its very DNA, which is the spirit of acceptance and service.”

Elijah, he explained, found himself in “a moment of crisis and fear for the future,” much like many parents who “fear that children will not be able to find their way amid the complexity and confusion of our societies.”

Nevertheless, in that moment, “God makes Elijah realise that the world does not end with him and commands him to pass on his mission to another,” he said.

“Dear parents, if you help your children to discover and to accept their vocation, you will see that they, too, will be ‘gripped’ by this mission; and they will find the strength they need to confront and overcome the difficulties of life,” the pope said.

The day’s Gospel reading from St. Luke, in which Jesus was rejected by the people of Samaria on his journey toward his death in Jerusalem, the pope said, is a powerful lesson for families, especially married couples who are called to experience “marriage and family life as a mission.”

“What Jesus encountered in Samaria takes place in every Christian vocation, including that of the family,” the pope said. “There are moments when we have to take upon ourselves the resistance, opposition, rejection and misunderstanding born of human hearts and, with the grace of Christ, transform these into acceptance of others and gratuitous love.”

Pope Francis encouraged families to take up their calling “with renewed conviction” and urged them to make sure the love they share is “always open, directed outward, capable of ‘touching’ the weak and wounded, the frail in body and the frail in spirit, and all whom you meet along the way.”

Departing from his prepared remarks, the pope said it takes courage to have a family and lamented that “we see many young people who do not have the courage to get married.”

“Many times, a mother will tell me, ‘Please do something. Speak to my son because he doesn’t want to marry someone. He’s 37 years old!'”

“‘But ma’am,'” he said he responds, “‘stop ironing his shirts. Start sending him out so that he leaves the nest.'”

Pope Francis urged the families to remember their importance for society and for the church, because “the church was born of a family, the Holy Family of Nazareth, and is made up mostly of families.” the pope said.

“May the Lord help you each day to persevere in unity, peace and joy, and to show to everyone you meet that God is love and communion of life,” he said.