Pope to Paulines, Combonis: To Evangelise is to Live the Gospel, then Share it 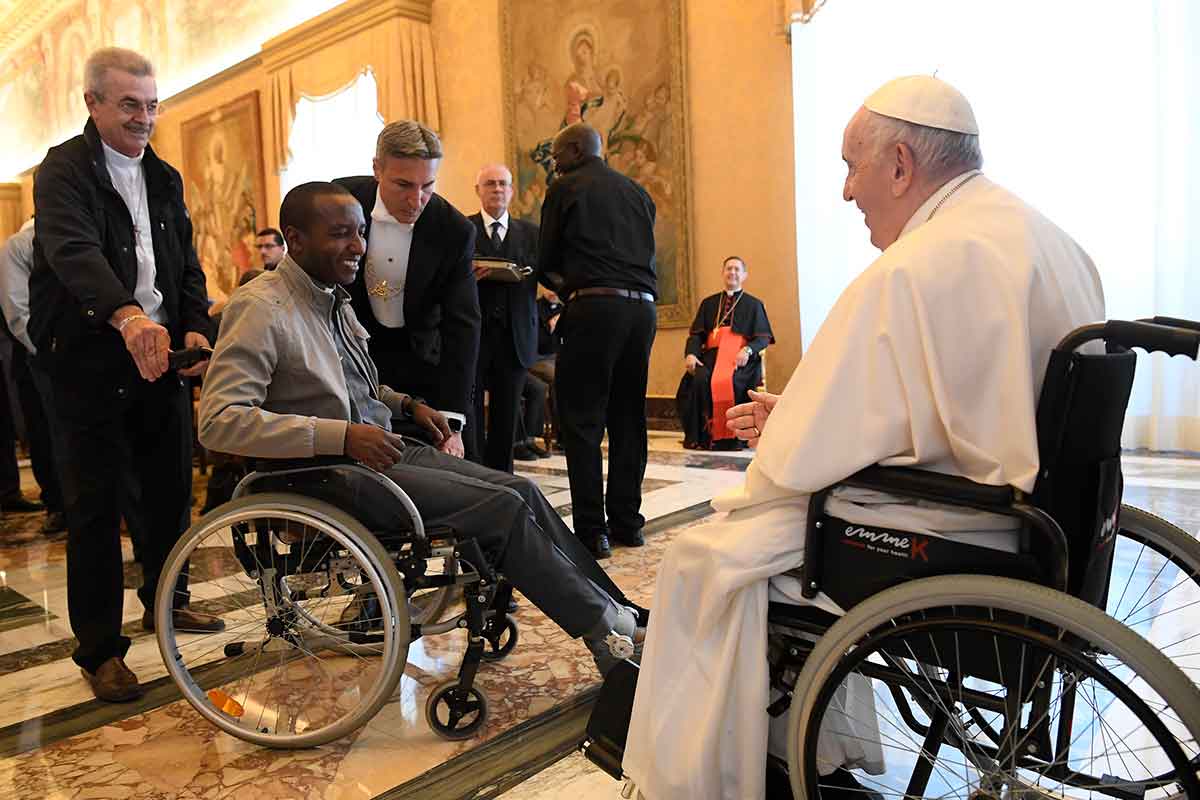 Pope Francis greets a cleric in a wheelchair during an audience with participants attending the general chapter of the Comboni Missionaries, at the Vatican June 18, 2022. (CNS photo/Vatican Media)

By Cindy Wooden – One cannot share the Gospel without living it first, Pope Francis said in separate meetings with members of the general chapters of the Pauline Fathers and Comboni Missionaries.

“The first thing a communicator communicates is himself, perhaps without meaning to, but it is himself,” the pope told the Paulines, a religious order with a focus on communications and the media.

“A missionary is a disciple who is so united to his master and lord that his hands, his mind and his heart are channels of Christ’s love,” the pope told the Comboni Missionaries.

Pope Francis met members of the general chapters of the orders at the Vatican June 18.

“Great missionaries” like Blessed Daniele Comboni and St. Frances Cabrini “lived their mission feeling animated and driven by the heart of Christ, that is, by the love of Christ,” the pope told the Combonis. That drive pushed them “to go out and go beyond: not only beyond geographical limits and boundaries, but first and foremost beyond their own personal limits.”

“The push of the Holy Spirit is what makes us come out of ourselves, out of our closures, out of our self-referentiality,” he said, and it “makes us go toward others, toward the peripheries, where the thirst for the Gospel is greatest.”

To be sent on mission, he said, it to be sent to bring God’s mercy, compassion and tenderness to people, and that can be done only by being merciful, compassionate and tender.

“Mercy, tenderness is a universal language, which knows no boundaries,” the pope said. “But you carry this message not so much as individual missionaries, but as a community, and this implies you must care not only for your personal style but also the style of your communities,” cultivating honest communication and care for one another.

At his meeting with the Pauline Fathers, Pope Francis handed them the speech he had prepared and then proceeded to talk about the importance of honest, complete communication.

“You have the vocation to communicate cleanly, evangelically,” the pope told them. “If we take today’s media, there is a lack of cleanliness, a lack of honesty, a lack of completeness.”

“Disinformation is the order of the day: one thing is said, but many others are hidden,” he said. “We must ensure that in our communication of faith, this does not happen, that communication comes precisely from vocation, from the Gospel – crisp, clear, witnessed with one’s life.”