Pope to visit Canada, limiting participation to one hour at events 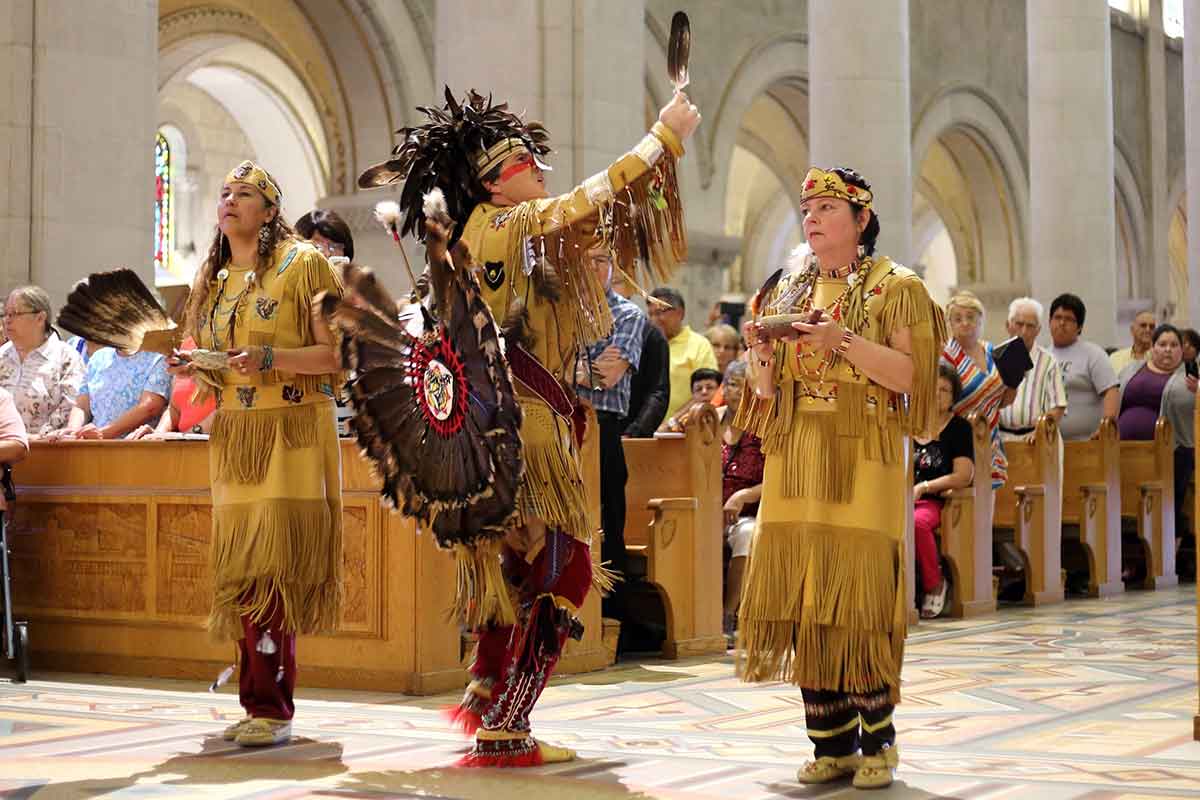 Members of the Huron-Wendat Nation perform a purification ritual at the Basilica of Sainte-Anne-de-Beaupré in Quebec on June 26, 2016. Pope Francis will celebrate Mass at the basilica July 28, 2022, during his July 24-29 visit to Canada. (CNS photo/Philippe Vaillancourt, Presence)

By CNS – Perhaps signalling some improvement in Pope Francis’ painful knee, the Vatican announced on June 23 that he will visit Canada in late July. However, the Canadian bishops said that, due to the 85-year-old pope’s age and limitations, it is expected that his participation at public events will be limited to approximately one hour.

The Vatican confirmed the pope’s plan to be in Canada July 24-29, returning to Rome July 30. The focus of the trip is his meetings with members of Canada’s Indigenous communities in the cities of Edmonton, Alberta; Quebec; and Iqaluit, Nunavut, the country’s most northern region.

The visit, drawing on the theme of “Walking Together,” will include a combination of public and private events.

The Vatican said Pope Francis will arrive in Edmonton on July 24 and, following a brief airport ceremony, will take the remainder of the day to rest.

Later in the day, the pontiff will visit Sacred Heart Church of the First Peoples, a National Indigenous church in downtown Edmonton.

On July 26, the feast of St. Anne, grandmother of Jesus, Pope Francis will celebrate an open-air Mass at Commonwealth Stadium in Edmonton. In the early evening, he will travel to Lac Ste. Anne, the site of an annual pilgrimage that welcomes tens of thousands of Indigenous participants from throughout Canada and the United States each year. Programming will be offered throughout the day leading up to the pope’s participation in a prayer service.

On July 27, he will fly to Quebec City for private and public meetings. He has been invited to participate at a dedicated area on the Plains of Abraham, where there will be opportunities for Indigenous cultural expression as well as the chance to view papal events on large screens.

On July 28, Pope Francis will travel to Sainte-Anne-de-Beaupré, where he will celebrate Mass at one of the oldest and most popular pilgrimage sites in North America. The basilica draws more than a million visitors – including annual Indigenous pilgrimages – each year. Later in the day, he will meet with bishops, priests, seminarians, consecrated men and women as well as those who work in various church ministries. The pope will have the remainder of the evening for rest, while a dinner focused on friendship and ongoing dialogue will bring together Indigenous leaders from Eastern Canada and representatives of the Catholic bishops of Canada.

Following a private meeting with the Jesuits July 29, Pope Francis will meet with Indigenous leaders from Eastern Canada before departing for Iqaluit, where he will spend the afternoon in a private meeting with residential school survivors before attending a public community event hosted by Inuit. He will depart for Rome from Iqaluit at 6:45 p.m.

Pope Francis had promised to visit Canada during a meeting on April 1 with representatives of Canada’s Métis National Council, Inuit Tapiriit Kanatami and Assembly of First Nations – three groups he also had met with individually. A delegation from the Manitoba Métis Federation met separately with the pope on April 21.

Many of the representatives in the groups were survivors of residential schools – boarding schools the government established to educate and forcefully assimilate Indigenous children. Many of the schools were run by Catholic religious orders or dioceses.

Canada’s Catholic bishops have said that “the pope’s visit will provide a unique opportunity for him, once again, to listen and dialogue with Indigenous peoples, to express his heartfelt closeness and to address the impact of colonisation and the participation of the Catholic Church in the operation of residential schools throughout Canada.”

The Indigenous communities have asked the pope to publicly apologise on Canadian soil for the church’s role particularly in the schools.

He already apologised to the Indigenous representatives at the Vatican. “For the deplorable conduct of those members of the Catholic Church,” the pope told the representatives in April, “I ask for God’s forgiveness, and I want to say to you with all my heart: I am very sorry.”