Pope Couldn’t Go to DRC, but Congolese in Rome Pray With Him for Peace 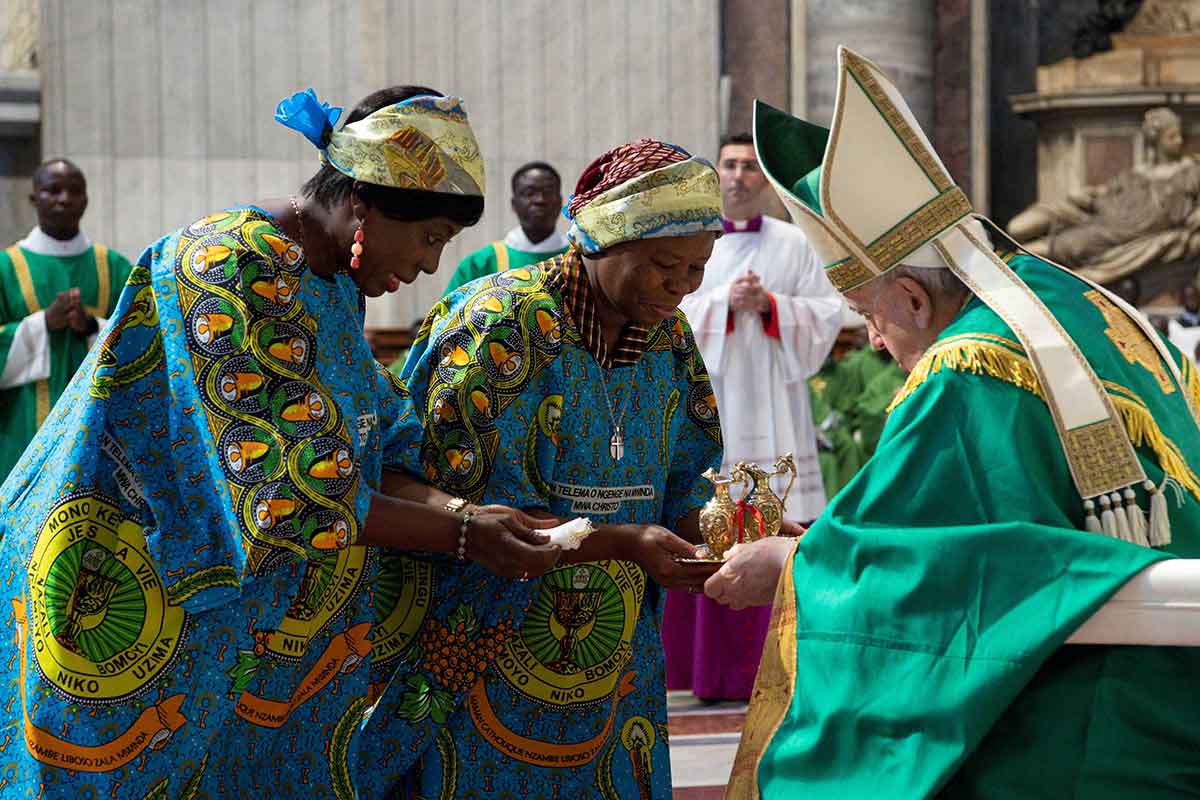 Two members of the Congolese community in Rome present the offertory gifts to Pope Francis during Mass in St Peter’s Basilica at the Vatican on July 3, 2022. Pope Francis was to have been in Kinshasa, DR Congo, that day, but was forced to postpone the trip because of problems with his knee. (CNS photo/Vatican Media)

By Cindy Wooden – Despite the disappointment that Pope Francis was not in DR Congo on July 3, some 2,000 people – most of them Congolese – joined the pope for Mass in St Peter’s Basilica, singing, swaying and ululating.

“Let us pray for peace and reconciliation in your homeland, in the Democratic Republic of Congo, so wounded and exploited,” the pope said in his homily. “We pray that Christians may be witnesses of peace, capable of overcoming every feeling of rancour, every feeling of revenge, overcoming the temptation of thinking reconciliation is not possible (and) every unhealthy attachment to one’s own group that leads to contempt for others.”

The Mass at the basilica’s Altar of the Chair was celebrated according to the Zairean rite of the Roman Missal, a rite that incorporates elements of the culture of the country that was called Zaire two decades ago when the liturgy was approved.

Members of the Congolese community in Rome provided the music, did the readings in Swahili and French and offered the intentions in Kikongo, Lingala, Swahili, Tshiluba and Italian.

In the day’s Gospel reading, Jesus sends out 72 disciples ahead of him and he tells them, “Into whatever house you enter, first say, ‘Peace to this household.'”

The Lord is telling his disciples they must present themselves as “ambassadors of peace,” the pope said. “A Christian always brings peace.”

“The Christian is a bearer of peace, because Christ is peace,” the pope said. “By this we can recognise whether we are his.”

“If, on the other hand, we spread gossip and suspicion, create divisions, hinder communion, put our identity before everything, we are not acting in the name of Jesus,” the pope said. “Whoever foments resentment, incites hatred or climbs over others, does not work for Jesus, does not bring peace.”

Pope Francis also insisted peace does not begin with treaties or political leaders, but with every citizen. 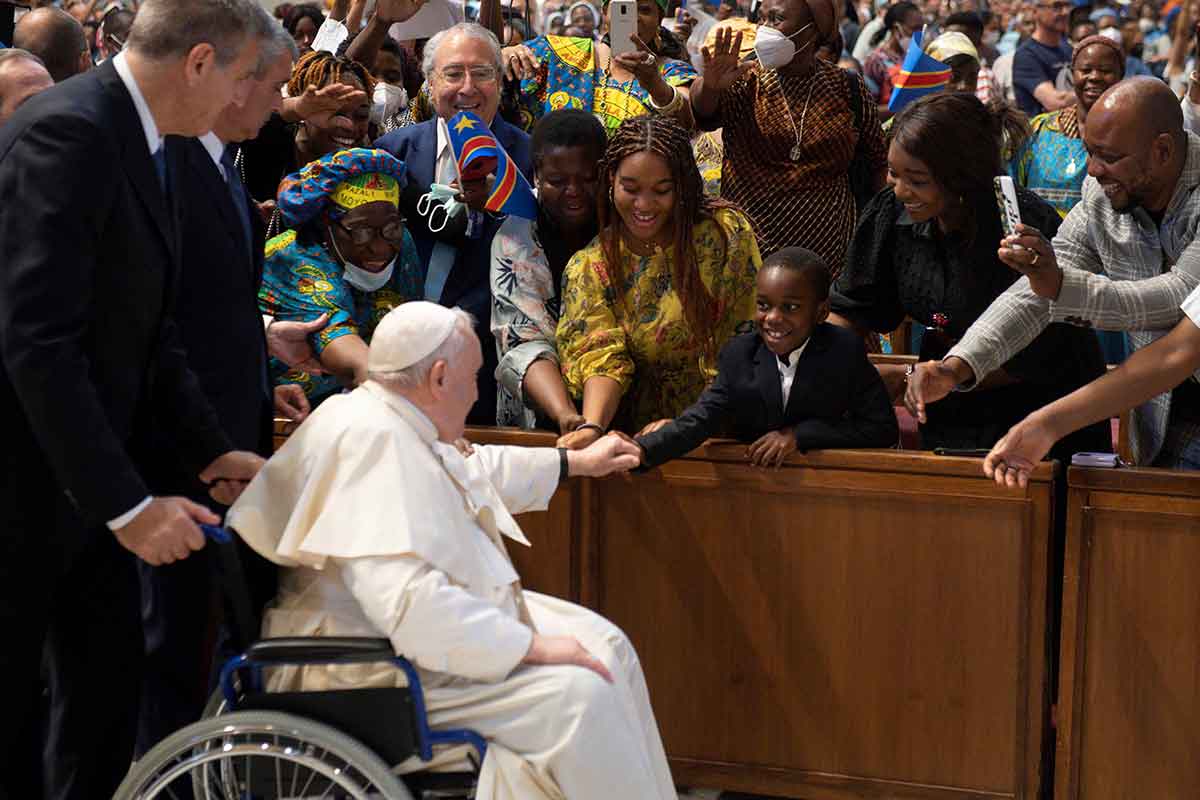 Pope Francis greets members of the Congolese community of Rome after celebrating Mass with them in St. Peter’s Basilica at the Vatican July 3, 2022. (CNS photo/Vatican Media)

Society will change, he said, “if first your heart is not at war, is not armed with resentment and anger, is not divided, is not two-faced, is not false.”

“To put peace and order in one’s heart, to defuse greed, to extinguish hatred and resentment, to flee corruption, to flee cheating and cunning: that is where peace begins,” the pope said.

“Brother and sister,” he pleaded, “please live in peace, ignite peace and peace will dwell in your home, in your church, in your country.”

The theme that had been chosen for the pope’s postponed trip to DRC was “All Reconciled in Jesus Christ” to emphasise how more than 95% of the nation’s people are Christian, yet sporadic violence continues, especially in the eastern and northeastern parts of the country.

Meanwhile in Kinshasa, DRC, Cardinal Pietro Parolin, Vatican secretary of state, was celebrating Mass for the pope with an estimated 100,000 people outside the Congolese parliament.

The cardinal noted that, especially in eastern DRC, “peace is continually threatened by armed groups and by exploitation and predatory interests, of which the country has long been a victim.”

“The lust for natural resources, the thirst for money and power close the doors to peace and represent an attack on people’s right to life and serenity,” he said. “But Jesus continues to send us, his disciples, so that we can repeat the same words: ‘Peace to this house!’ Peace to the Congolese land: may it once again become a house of fraternity!”