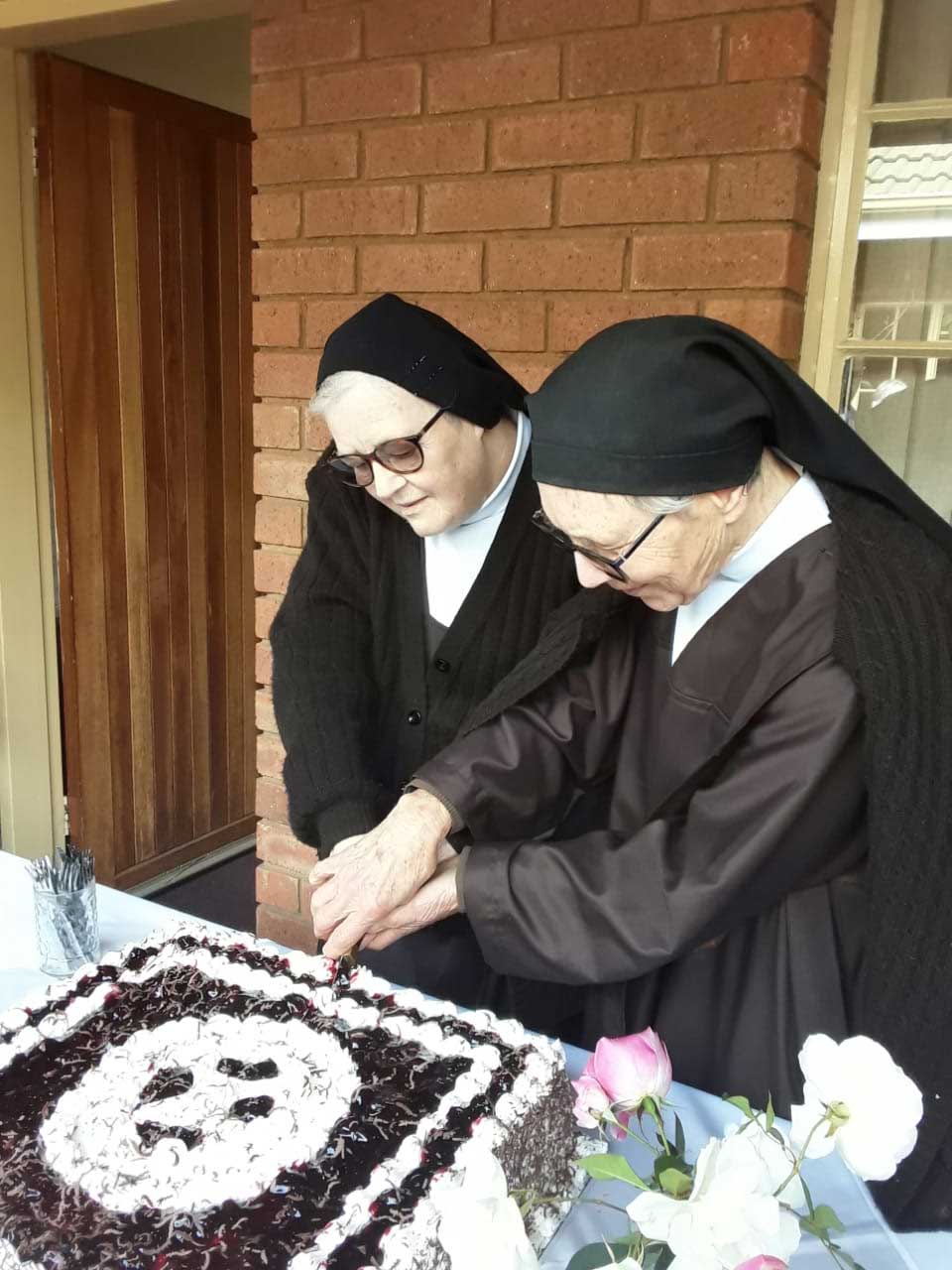 Carmelite Sisters Marie-Therese and Bernadette (foreground) cut a cake to celebrate their diamond jubilees in Benoni. Once Carmelite Sisters were separated from the world; they are now much closer to the people and enjoy visits.

The move was made as Rivonia became a business district and a suburb of Johannesburg’s metropolis. The sisters wanted to continue their contemplative lifestyle.

In July 2021 the Sisters celebrated their 90 years of footprint in South Africa. Many guests both religious and secular flocked to the community to give honour and pay tribute to this venerable community of women. Mass was said in the most beautifully decorated chapel that is the mainstay of the “Carmelite sisters of Benoni” (term used locally).

The Mass was celebrated by two Carmelite Fathers as well as Dominican Father Martin Badenhorst, raising the joy that reflected on the faces of the two nuns. Guests gathered around the two women after Mass, hugging and kissing them, by way of congratulating them.

Mass in their chapel was poignant as the two Sisters did a well-practised liturgical dance at the offertory. The nuns in their brown habits, with the white mantles draped over their shoulders, were not separated by the traditional railings that usually demarcate “exclusion” from the other congregants. This shows that a “lightness of being” has permeated the community and the Sisters have evolved to become more at one with the other congregants.

An air of joy and fraternity enveloped the courtyard where a spread of refreshments was laid out for the Sisters and guests to enjoy. All seven of the convent’s Sisters mingled with the guests, and an air of relaxation permeated the happy gathering. The traditional austerity has gently lapsed and is replaced by a deep and demonstrative friendship emanating from all the Sisters.

There is an added spark in the community which may be attributed to the presence of younger consecrated Sisters who have joined the community from parts of Africa that include Kenya and Zimbabwe. They bring with them a new sense of community, and their influence is visible by the singing of African hymns and liturgical dance.

The Carmelite Sisters foster life-long friendships and maintain family ties. Most of them keep in contact with former school and college/university classmates as well as with frequent visitors and their benefactors. The latter do prevail upon the Sisters to pray and intercede for the many kinds of afflictions that accost us human beings. The Sisters in their vocation include praying for the world;  one could say that they are praying candles that emit light and love in the places of despair and darkness that are part of the human condition.

Their livelihood is dependent primarily on altar breadmaking. This is their purpose, as well as their connection to the outer world, albeit within the operational aspects of the Catholic Church.