After the March for Life – Keep Walking! 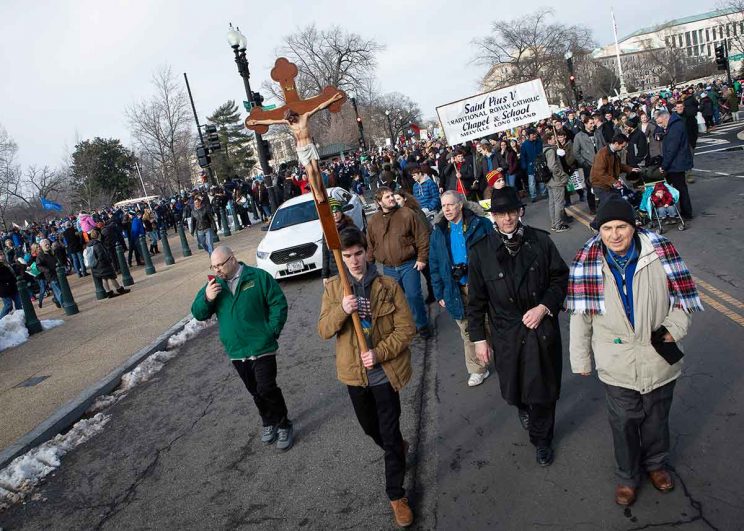 In the more than 30 annual Washington, D.C. Marches for Life I have participated in, I always think the current march is the largest ever. But since accurate figures are hard to come by, it usually comes down to taking a good guess.

But a 60-second time-lapse video produced by Students for Life of America clearly reveals, regardless of the exact number, that this year’s March flowed on and on (check it out https://bit.ly/2Hu3sC2).

It’s heartening to see that lots of people care. But do we really care enough?

As important as they are, the annual Washington March for Life, Walk for Life West Coast, Midwest March for Life (Feb. 2) and dozens of similar events at state capitols throughout the U.S., are simply not enough.

I remember some years ago, just before our bus left for the March for Life, a well-meaning priest congratulated us for doing our yearly duty to protest abortion and protect unborn life. While he certainly meant well, he didn’t quite grasp the horrific reality that the approximate 900,000 brutal abortions each year in the U.S. (see: https://bit.ly/2snR4vE), and the estimated 56 million annual abortions worldwide (see: https://bit.ly/2R6xsDr) – urgently requires various ongoing efforts throughout the entire year.

While many marchers actively work to end abortion and support women in difficult pregnancies throughout the year, many do not.

Years ago, the late Nellie Gray, who founded the March for Life, told me that if just Catholics alone tirelessly stood up and demanded an end to abortion, it would end!

But sadly, we are not paying enough attention to this tragedy. Perhaps after all these years of legalised abortion, we have gotten somewhat use to it.

Homilists rarely rally us around the plight of our tiny unborn brethren – or for that matter the plight of our war-torn, hungry, poor, homeless, migrant, sick sisters and brothers, and the environmentally wounded planet we all share.

Abortion centres have very few people, and often no one, standing in peaceful, prayerful witness on behalf of the unborn babies being killed within these so-called clinics.

Education at all levels regarding the barbaric reality of abortion (see: http://www.abortionno.org/), and the miraculous wonder of human development from the moment of conception onward (see: http://bit.ly/1XezTp2) is not sufficiently happening.

Legislators are not being swamped throughout the year with phone calls, email and text messages insisting that they pass legislation to protect the most vulnerable human beings among us.

We absolutely need to put political pressure on our elected officials to do the morally right thing. For as the saying goes and is true in most cases, “Politicians don’t see the light until they feel the heat.” We need to turn up the heat!

Even new born infants are less vulnerable than unborn babies, for it is a rare person who will murder the helpless baby he or she can see.

But in this case there is light at the end of the tunnel. A wonderful international effort by the Knights of Columbus has provided 1,000 ultrasound machines to pregnancy centres and pro-life health clinics throughout the U.S. and in several countries, thus allowing mothers and fathers to see their miraculous unborn babies.

We would do well to walk in the footsteps of the nonviolent Jesus and his early followers, proclaiming in word and deed that no life is disposable, and that every person is a beloved child of the God of life!