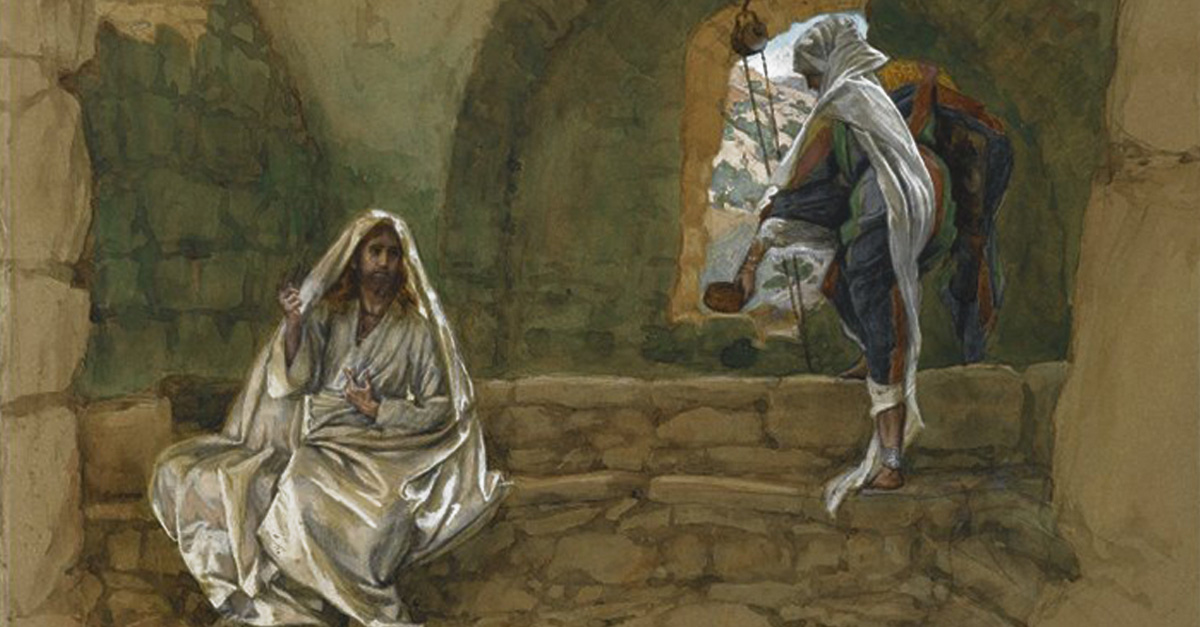 Samaritan Woman at the Well painted by James Tissot

Our journey crossing the desert with Robert Wicks continues on this third Sunday in Lent. Today we are called to the epiphany of wonder and awe, to sit at the edge of mystery and to unlearn that which had previously been our guide, but is no longer needed, no longer useful. Here in the desert, we come to ask the questions, to listen and to hear the answers that will open to us the quiet, powerful voice of freedom.

On this journey we follow today the way of the Samaritan woman at the well to experience also that epiphany of wonder and awe, to sit at the edge of mystery and then to let go of what is no longer needed, leaving behind the jar of water as she also overcomes centuries of resentment with all its undue stress and anger that so often leads to violence. This is the route to follow into the new way of freedom.

Through the great ages of the ages, we have heard the same story is repeated, becoming the backdrop for our prejudice and our blindness. The stories have been told and retold of the Samaritan woman at the well as a slothful, wanton sinner and an outcast from her community. These are the stories that begin and are entwined with our church history:

Her answer [to Jesus] is a form of confession because she truly has no legitimate husband (Origen). Jesus’ request exposes her guilt (Chrysostom) because she is involved in an illicit union (Augustine). Jesus makes her understand that she needs to confess her sins and change her life before she can obtain this life-giving water of grace.

These are a type of ad hominem attacks that appeals to our prejudices, emotions and special attachments that is a surefire way of gaining the moral high ground that blinds us to our own motives; even in the saints. This pointing a finger at others is the greatest obstacle to insight and the flow of grace. When the accusatory finger is pointed towards another, my own need and my own thirst is denied.

The story of the Samaritan woman at the well is the longest recorded dialogue in the Gospels and eclipses the all too often dullard interactions between Jesus and his disciples. The Samaritan woman is theologically astute, politically aware and feisty. But perhaps her greatest quality is that openness to listening and hearing Jesus without self-justifications.

Let us also try to clear our misty vision. The narrator reminds us that Jews won’t have anything to do with Samaritans who were considered ritually unclean, and contact with Samaritans would make them unclean too. The pride that all too often hide behind the smokescreen of ritual purity. This is where Jesus found evil and sin and this is where we also must search for evil and sin within our own hearts.

It was not uncommon for women to be married several times. In antiquity, women usually were married when they were twelve years old or so; their husbands were generally ten to fifteen years older than them. It would be common for a woman to be widowed at a young age, and since society operated on the basis of male-centred households, she would need to remarry to gain access to legal, economic, and social status.

The Samaritan woman has been widowed or divorced several times over. It was common for men to divorce their wives, perhaps to make a more advantageous match, or for more personal reasons. Again, a divorced woman would need to remarry to survive in society.

Economic reasons might also limit the possibility of an official marriage. Perhaps the man was wealthy but the woman was poor, or perhaps the man had grown children from an earlier marriage and therefore would not want to dilute the inheritance by adding in children from a second marriage. In these cases, instead of legal marriage, people could simply live together; we call this a ‘common law marriage’ today. It was a form of marriage without the legal or economic consequences of official marriage.

The Samaritan woman’s marital status may be unusual and she does seem to have been particularly unlucky with respect to her husbands. Her marital history, however, does not make her the sinner of the story. So why does Jesus bring up her marital status? The answer is in the very next verse when Jesus tells the woman her own story and she realises that he is a prophet.

As with Nathanael, Jesus’ revelation of the woman’s personal history reveals his own identity to her. She later uses his knowledge to encourage her friends and neighbours to meet Jesus; another sign that John does not present her as a sinner or social outcast since even though no woman could bear witness, her neighbours listen to her.

So, this dialogue is about Grace and salvation. The question of salvation here centres on the identity of the people of God. Here is where the location of the story in Sychar, ancient Shechem and modern-day Nablus, at Jacob’s well, becomes important.

Apart from the tombs purchased in Genesis 23, this land was the first bit of the Promised Land owned by Abraham’s family. But by Jesus’ day, it was part of Samaria, inhabited by the despised Samaritans. Moreover, the Samaritans had built their temple on Mt. Gerizim, looming over the city. The well symbolises contested space. As a source of life, this is a scenario endlessly repeated at the grassroots level throughout Africa and the Middle East.

When the woman asks Jesus about worship in, she is not deflecting attention from her marital status; she’s rather taking her chance to question this prophet on the issue at the heart of the centuries-long divide between the Jews and the Samaritan. Should God be worshiped in Jerusalem, like the Jews say or on Mt. Gerizim, as the Samaritans say? Which people are truly God’s people?

Jesus tells the woman that the place of worship is not important. With this simple statement, he dismisses the battle for space, for ownership of the land. He does not dismiss the question of identity completely, however. In fact, he upholds the identity of the Jews as God’s true people but He goes on to say that this identity is changing: ‘The hour is coming, and now is.’ Right now, in Roman-occupied Palestine, in the city of Sychar, as Jesus is talking with a Samaritan woman, things are changing. The question of identity is no longer about Jew or Samaritan, but about ‘spirit and truth’.

In twenty verses, John’s story moves from the spectre of racism to a question over national and religious identity and finally ends with the village of Sychar believing that Jesus is ‘Savior of the world… all the world’. And the woman with the unfortunate marital history, the woman who happened to come for water as Jesus was resting by the well, is the centre of the story.

She recognises who Jesus is, and she tells her neighbours about him while Jesus’ disciples are as worried about feeding Jesus as they are about social convention and ritual purity. This nameless Samaritan woman is already out doing the work of Jesus’ ministry; doing the work of one who is sent.

The Church proclaims that every baptised Christian participates in Christ’s threefold office of prophet, priest, and king, yet with sleight of hand women are denied the right as proclaimers of the Gospel. The argument that the priestly function can only be performed by men in persona Christ Capitis, in the Person of Christ as Head, implies and grasps for men equality with God’s manhood, which denies the universality of the Cosmic Christ that pervades all of creation; the Christ who ‘fills the universe in all its parts’.

Let each of us pray this Lent for that insight and grace to expose our particular prejudices, unruly emotions, and special attachments that blind us from our own collective participation in anything that tears apart the Body of Christ. Let us especially pray for those we have relegated as sinners through our lies of convenience, calumny, and detraction that destroys community and healthy social relationships.

We cannot open ourselves to receiving grace without recognising our need for ‘living water; by our true repentance, by confessing our complicity and by receiving the antidote to the poison that has infected us.