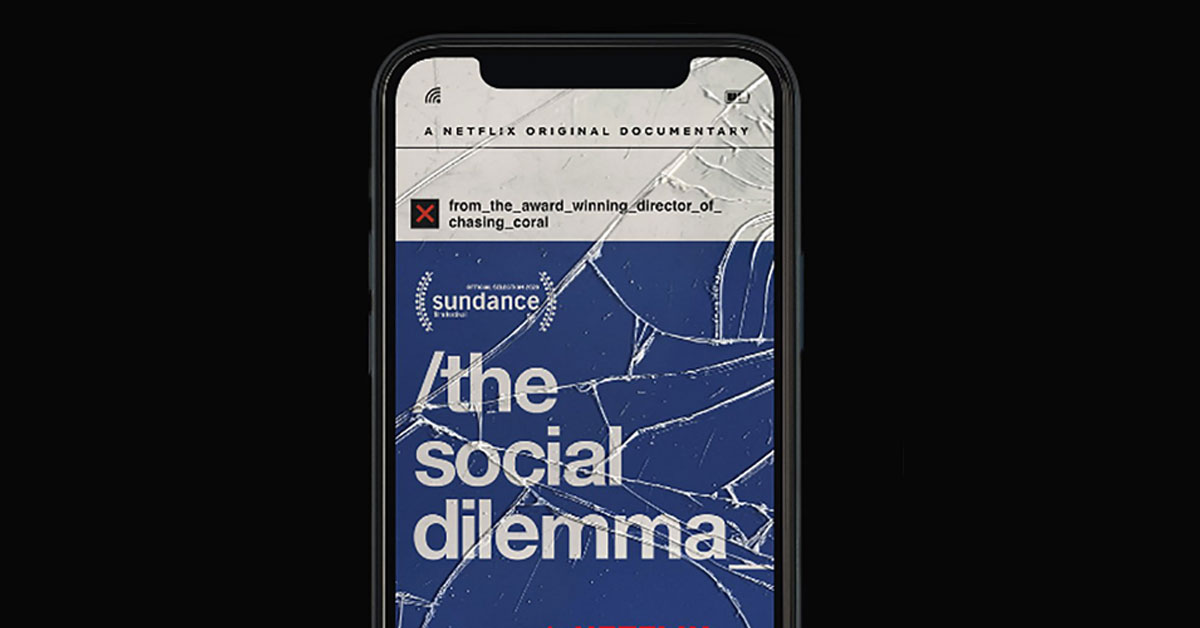 This is the movie poster for the Netflix documentary “The Social Dilemma.” (CNS photo/Netflix)

By Brett Robinson – A recent Netflix documentary about the social media industry called “The Social Dilemma” has raised some important questions for the church in the digital age. The movie looks at the psychological techniques used by companies like Facebook, Twitter and Instagram to encourage the addictive use of social media.

The designers who are interviewed in the film talk openly about how they programmed social media platforms to hack the human nervous system, exploiting weaknesses in the brain’s attention and reward centres.

Scrolling social media feeds appeal to the same internal mechanisms that lead gamblers to sit in front of slot machines for hours by increasing the flow of dopamine, a pleasure hormone triggered by things like food, gambling, sex and drugs. Or so the story goes.

The church is paying close attention to these developments, in part, because the “addiction” narrative is only half the story. Addiction is never healthy, even addiction to good things. Living virtuously means practising restraint and moderation.

However, to see the social media problem as one of addiction or self-control reduces it to a modern view that sees man as just another machine to be programmed. Engineers who view the human brain in this mechanistic way have an impoverished view of the human person and psyche, the Greek word for “soul.” A true “psyche-ology” studies the soul and all of its powers and faculties.

The contrite social media engineers and designers in “The Social Dilemma” seem to have made the movie so that they could come clean. But why would a bunch of successful social media professionals decide to do a mea culpa movie that trashes their own industry?

It seems that the movie is yet another “hack” to generate some audience arousal. It turns out that most of the personalities featured in the film, including Tristan Harris (formerly of Google), are behind a new initiative called the Centre for Humane Technology. The centre wants social media users to become more civil, focused and compassionate. How do they do that?

By downloading apps promoted by the Centre for Humane Technology, of course! Apparently, the prescription for our digital addiction is “more cowbell.” It’s social engineering with a fresh coat of paint.

Social engineering did not start with social media. It emerged over a century ago when the nascent professions of public relations and advertising were looking for ways to convince large numbers of people in this country to support US involvement in World War I.

Media research labs that focused on human behaviour sprung up at places like Stanford and Princeton, funded by places like the Ford Foundation. Government and corporations were both keenly interested in the tools of mass persuasion to further their aims. Initially referred to as “psychological warfare,” the field later adopted the friendlier term, “mass communication.”

The church, unlike Big Tech, is not in the business of social engineering. It was established to save souls. Through the divine liturgy and the sacraments, the church provides the “platforms” necessary to grow closer to God in holiness so that the soul can be at peace.

Therefore, church leaders should resist the temptation to view social media platforms as divinely ordained technologies that can be engineered for the salvation of souls.

In his most recent encyclical, “Fratelli Tutti, on Fraternity and Social Friendship,” Pope Francis says, “Digital media can … expose people to the risk of addiction, isolation and a gradual loss of contact with concrete reality, blocking the development of authentic interpersonal relationships.”

This is not a wholesale rejection of new technologies, rather, it is an admission that these new technologies have the potential to lead to certain disorders in the soul.

Temperance, true friendship and an ordered view of reality that comes from a well-formed memory and imagination are faculties and powers of the soul that require cultivation and practice.

It seems like it’s high time for a renewed pastoral emphasis on what it really means to have a soul amid all the secular efforts to predict and control human behaviour.

The Dark Side Of Memes: Spreading Untruths About Religion

How to be Church in the ‘New Normal’

The Times Demand We Revive The Spirit That Won WWII
Share