The Great Mission of St Joseph 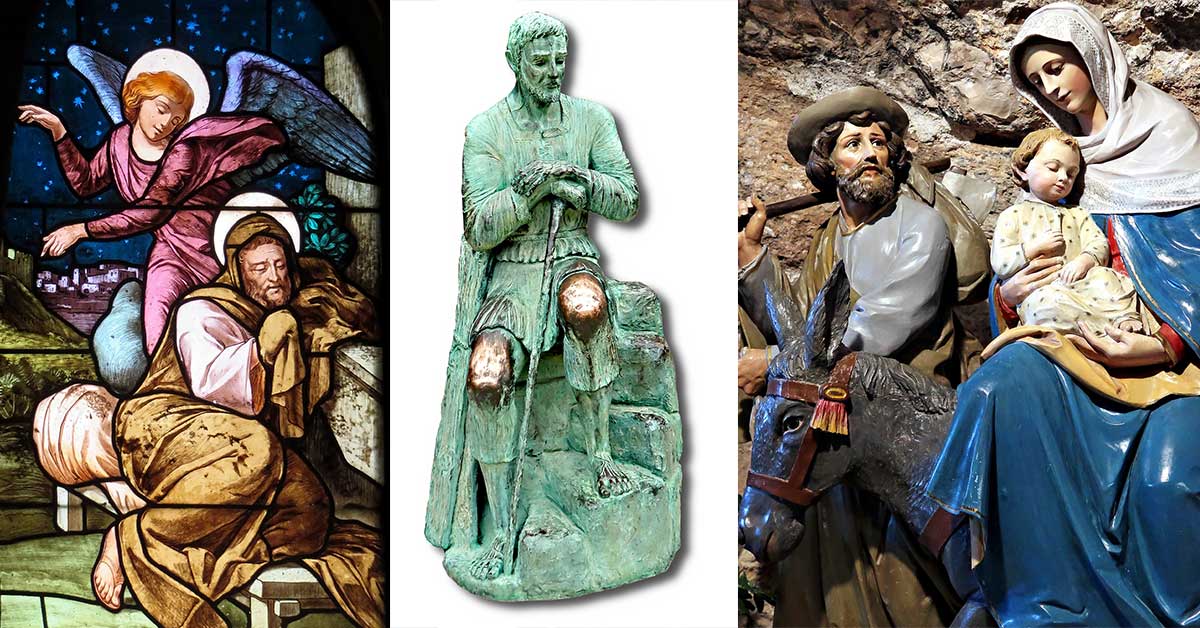 From left: The angel appears to Joseph, telling him to marry the pregnant Mary –  stained glass window in the grotto of St Joseph’s church in Nazareth. A bronze statue of St Joseph between St Joseph’s church (also known as the Carpenter’s Workshop) and the basilica of the Annunciation in Nazareth. The knees have been rubbed blank by pilgrims touching them. The Holy Family embarks on the flight into Egypt. In the Milk Grotto church in Bethlehem. (Photos: Günther Simmermacher)

Fr Chikadi Anyanele CMM says that we would do well to emulate the mission of Jesus’ earthly father.

Pope Francis has noted that “with a father’s heart…Joseph loved Jesus, whom all four Gospels refer to as the son of Joseph”. St Joseph had earned this title, because just like Mary, he said yes to God’s invitation to be part of his plan in the history of salvation.

St Joseph, as the earthly father of Jesus, deserves all the respect, honour and recognition accorded to him by the Church. It is good to reflect on the Lord’s invitation which Joseph accepted. This “just man” (Matthew 1:19), whose life does not feature prominently in Scripture, is a model of honour and sacrifice. Joseph accepted the risk in being part of God’s new plan.

Defender of a woman

In 1st-century Jewish society, certain types of adulterers could be killed by public stoning. Accordingly, Mary would have been stoned or socially excluded had her unexplained pregnancy become public. When he discovered that Mary, his betrothed, was pregnant with a child of which he was not the father, Joseph wanted to pull out of the marriage arrangements. In charity, he was going to do so discreetly (Matthew 1:18-19). He was unwilling to disgrace Mary and went all out to protect her and the unborn child she was bearing.

Joseph stepped up and saved the situation. He arranged Mary’s famous escape to her cousin Elizabeth in the Judean hill country. There Mary proclaimed “The Magnificat”, this remarkable canticle of thanksgiving for her own safety and in praise to God for his miracle of Elizabeth’s pregnancy with John the Baptist (Luke 1:39-56). It was this very singular act — facilitating Mary’s escape to her cousin — that spared her from the “stones” of Jewish tradition. Three months was enough time for Mary to be away so that Joseph could make up his mind to take her in when she returned, and the marriage ritual could be conducted in Mary’s full safety at home.

By then, the messenger of God, an angel, had spoken to Joseph in a dream, convincing him to take Mary as his wife. It was in this “dream” that Joseph’s mission was conceived — a mission of fatherhood, protecting Mary and the child she was carrying, and thereby becoming active in God’s plan.

Joseph’s willingness to cooperate with God in his plan for the world’s salvation is commendable, and it offers us a model for emulation. Every mission has its target to achieve. Individuals in the Bible — Abraham, Moses, Isaiah, Peter, Paul — and in our own social histories, such as Mandela, Gandhi or Abbot Francis Pfanner of Mariannhill, reveal that men and women dream of missions, and with the grace of God they set out to achieve these missions, for the good of humanity. Joseph’s own annunciation by an angel gave him a must-achieve mission, to accomplish his God-given task and responsibility. The safety of Mary and Jesus was a clear example of the fatherly task and accomplishment he freely assumed.

The kind of mission I refer to comes with a heavy burden of responsibilities and sacrifices. It demands personal commitment and conviction that must be attended to. St Joseph offers a good example of task-accomplishment. Despite the risk, the danger, the challenges and the unforeseen circumstances, Joseph made every effort to keep Mary and Jesus safe. He took the risk of going against Jewish laws governing the punishment for “wayward” women, as Mary would have been considered to be, had Joseph not claimed fatherhood.

In this way, St Joseph opposes the ill-treatment and violence against women through the ages, including our own. He was able to save Mary and her unborn child Jesus. He stood by Mary and thereby stands up for all women and the vulnerable who must be protected in all practices and traditions.

A model of sacrifice

Sacrifice is an act of atonement which one offers for the achievement of a better or a higher goal in life. Joseph is a perfect example of a man who sacrificed his personal and individual life for a greater purpose in the light of God’s plans in his life and for humanity. Joseph lived a modest life. God identified him to be sent for a mission which made him give up his comforts to provide for Mary and Jesus (Matthew 2:13-15).

As a refugee in Egypt with Mary and Jesus, Joseph became a real protector of God incarnate on earth. Without him, Our Lord would have been killed by the jealous and hateful King Herod. Listening strongly to another dream, this one issuing a warning, he took the risk of escaping to Egypt, despite the dangers of the oppressive darkness and the desert cold and wind, or bandits and soldiers on the way.

Having come through this journey, Joseph encourages us to believe and trust in the protection of God who will always shield the pilgrims on earth and poor refugees all over the oppressive world. As patron of refugees, St Joseph calls us to respect and accept strangers among us (Matthew 25:31-40, Exodus 22:21, 23:9).

May we never forget: Our Lord Jesus and our Blessed Mother once were refugees. St Joseph thus encourages all of us to stand with refugees and to support them in every way.

Such a good man is a remarkable example to our deeply disturbed societies. A few important notes can be concluded from the life of St Joseph as he issues a great challenge to our troubled world:

– St Joseph remains a model for today’s men to choose the part of fulltime husbands and fathers at home with their wives and children.

– Everybody, according to St Joseph, deserves the protection of men. No child or woman should be left to be brutalised or molested by anyone in any culture.

– As we live in a challenging world, everyone must be supported to make a free choice about whom they live and relate with. No woman or girl should be forced to live with anyone who is not of their free choice.

– Respect and honour for others should guide every Christian, whether they are men or women.

– Every effort must be made to save the lives of unborn children. And no child should be abandoned by their parents at any stage of their lives.

– We cannot underestimate the act of listening to our “dreams” and visions which may be revealed to us by God. This requires intensive prayer and action in our Christian lives.

– We must respect and welcome the refugees in our midst. Our Lord was and still is such a refugee living among us.

– The cooperation between Joseph and Mary remains a notable value to guide all married couples.