What we can learn from the Marikana tragedy

Whatever way you look at it, the shootings at Marikana in August were a great tragedy. In all it cost 46 people their lives. 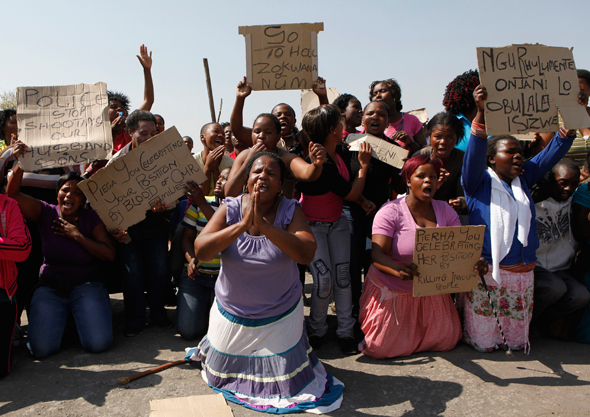 "On behalf of the Catholic Church, I offer sincere sympathy and condolences to all those who lost loved ones in the violence at Marikana and in all violence, especially that which is re-emerging in KwaZulu-Natal." (CNS photo/Siphiwe Sibe ko, Reuters)

The world which ushered in the new South Africa, only a short 18 years ago, with indescribable joy, hope and expectation, is utterly saddened and confused. Shaking its head and wringing its hands it joins us in wondering: “How could something so terrible happen in the land of the “miracle” of 1994?

The official inquiry has yet to say what happened, but already we can identify ingredients from the bad old days:

a) the chasm between promises of a better life and what has been delivered,

b) extreme disappointment and disillusionment,

c) anger expressing itself in bullying, intimidation, intolerance and recourse to violence.

When these ingredients are present there will be extreme fear and tension. All that is needed is the smallest spark and an absolute disaster is inevitable!

At Marikana, what was the spark? Was it the toyi-toying of the miners or was it the fact that many were armed with an assortment of “traditional weapons”? Was it this that caused the police to use live ammunition, rather than rubber bullets or teargas? Hopefully, the inquiry will reveal the truth.

Meanwhile speculation continues: Did the police panic? Did they decide to teach the unruly miners a lesson they would never forget? Were they acting out their former commissioner’s instruction, “don’t die with your guns in their holsters”?

Or, perish the thought, did they decide to avenge the killing of two of their colleagues?

No one can say, yet. What we can say is that here again was an example of our South African propensity to violence. We so easily disregard totally the dignity and integrity of the other, in particular his God-given life.

For the Church, the questions are these: How do we redeem society from this apartheid-era vice? How do we get people, in particular men, to subscribe again to the vision and lofty ideals of the Constitution? How do we restore the Constitution to being a living project, rather than the dead document, which it seems to be becoming?

As I see it, as Church we need to call for government that

a) shows by its policies and actions that it is truly committed to “governing” the country by meeting the people’s clearly expressed needs and aspirations, rather than party policy based on the failed systems of socialist or communist Europe,

b) abandons its belief that because it is supported by the majority it has the licence to “rule” according to its own ideology to the detriment of the common good, and

c) calls its police force to account for its actions, especially those that have taken innocent lives.

Whatever the root cause of Marikana, it is clear that we need a strategic plan that is guided by the principles of truth, justice and fairness. That plan needs to include deep respect for the inherent dignity of every human person, who, regardless of racial or ethnic or linguistic origin, is made in the image of God. And for that reason alone, all must be provided with protection of life and limb in every circumstance.

On behalf of the Catholic Church, I offer sincere sympathy and condolences to all those who lost loved ones in the violence at Marikana and in all violence, especially that which is re-emerging in KwaZulu-Natal.

May our prayers for peace be expressed in the firm commitment to work for a change of behaviour which will lead to the kind of reverence and respect for life which God himself showed when he gave us his commandment: Thou shalt not kill.