NEW YORK (CNS) – Set primarily on a Soviet submarine in the midst of the Cold War, writer-director Todd Robinson’s “Phantom” (RCR) pits a crew of seasoned sailors against a handful of the KGB’s most ruthless bad guys. 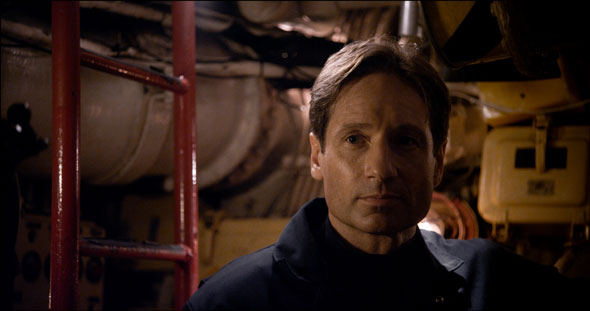 David Duchovny stars in a scene from the movie “Phantom.” (CNS photo).

His drama also implicitly contrasts the Christian faith adhered to by at least some of the former with the cynical atheism prevailing among the latter.

Robinson’s speculative thriller plays off one of the most mysterious incidents in the long struggle between East and West: the 1968 sinking of K-129, a nuclear-armed Soviet sub whose loss has never been fully explained. His screenplay presents a possible scenario of what might have proceeded – and caused – the disaster.

The plot centers on honourable but troubled Capt. Demi (Ed Harris). The son of a distinguished World War II-era naval commander, Demi’s own career has been blighted by an incident we initially glimpse only in strobe-lit flashbacks.

On the verge of retirement, Demi is entrusted with a final mission, one seemingly designed to humiliate him. He’s ordered to take the helm of an obsolete, diesel-fueled clunker, and steer it through its final voyage.

Accompanying him will be a group of unwanted guests: intelligence operatives led by steel-willed Agent Bruni (David Duchovny).

Demi’s dislike of Bruni and his ilk turns to suspicion after he discovers that Bruni is bent on a high-stakes clandestine operation that may or may not have been sanctioned by Moscow. As he and Bruni struggle for control of the creaky vessel, with its vast destructive power, the lower ranks are forced to choose sides.

Comparisons between this dive and 1990’s “The Hunt for Red October” are perhaps inevitable; they are unlikely to prove advantageous for Robinson. In fact, this routine military exercise sometimes feels like a warmed-over version of that Sean Connery gripper.

“Phantom” can be honoured, though, for its exploration of the nature of heroism. And viewers of faith will be pleased – if not, perhaps, entirely satisfied – by its sporadic showcasing of Demi’s frayed but enduring ties to the Russian Orthodox Church. While Bruni is motivated by a narrow and fanatical patriotism, Demi’s broader humanism can be read as an outgrowth of his Christian beliefs.

The film contains some gory violence and intense gunplay, a suicide, fleeting semi-graphic sexual activity, a couple of uses of profanity, at least one rough term and occasional crude and crass language. The Catholic News Service classification is A-III – adults. The Motion Picture Association of America rating is R – restricted. Under 17 requires accompanying parent or adult guardian.

NEW YORK (CNS) – The dog days of summer may inspire the urge to get away from it all. Wise moviegoers, however, will not seek their relief in “Vacation” (Warner Bros.), a dog of a comedy that happily rolls around in all manner of muck. 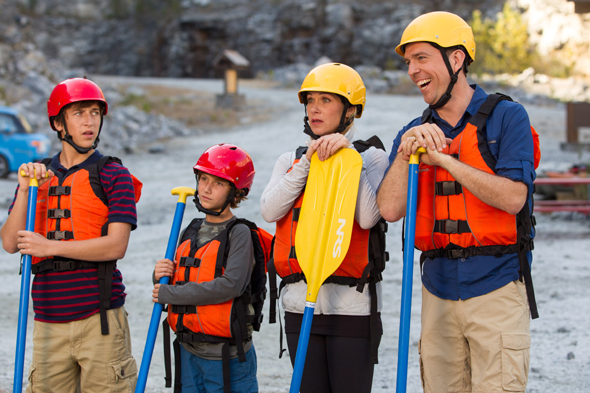 This wretched revival of the franchise that began with 1983’s “National Lampoon’s Vacation” revolves around a new generation of the same hapless family – the Chicago-based Griswolds – featured in the original. The destination of their sultry season get-away also remains the same: a California amusement park, and Disneyland stand-in, known as Walley World.

The Griswolds embark on their road trip thither after bumbling patriarch Rusty (Ed Helms) – the teen son in the Reagan-era films – learns that his wife, Debbie (Christina Applegate), and their quarrelsome brace of boys, James (Skyler Gisondo) and Kevin (Steele Stebbins), are bored with the clan’s annual outing to a cabin in the Wisconsin woods. Rusty decides a weeklong ride to the Left Coast, by contrast, will be just the thing to shake up their routine and boost togetherness.

Needless to say, the travels that follow are beset by a variety of disasters. Yet the real calamity befalls viewers as they find themselves dragged along on a forced march through a landscape of tastelessness unrelieved by laughs.

Co-writers and -directors Jonathan Goldstein and John Francis Daley try to disguise their steamy material by cloaking it in family values. Thus, not only do we witness Rusty’s fatherly concern – which eventually morphs into exasperation –but also various scenes that demonstrate his and Debbie’s shared commitment to maintaining the vibrancy of their marriage.

The challenges to their union are typified by Debbie’s attraction to – and Rusty’s jealousy of – their hunky brother-in-law, Stone (Chris Hemsworth). But a stopover at Stone’s Texas home reveals, so to speak, the picture’s real agenda as their host pays Rusty and Debbie an enthusiastically exhibitionist bedtime visit, his tight underwear and contrived poses leaving nothing even to the sleepiest imagination.

Add to this interlude of too much information an inadvertent swim in a cesspool, the numerous obscenities the script puts into preteen Kevin’s mouth as well as ill-advised jokes about AIDS and paedophilia, and pretty soon you’ll be wishing you weren’t here.