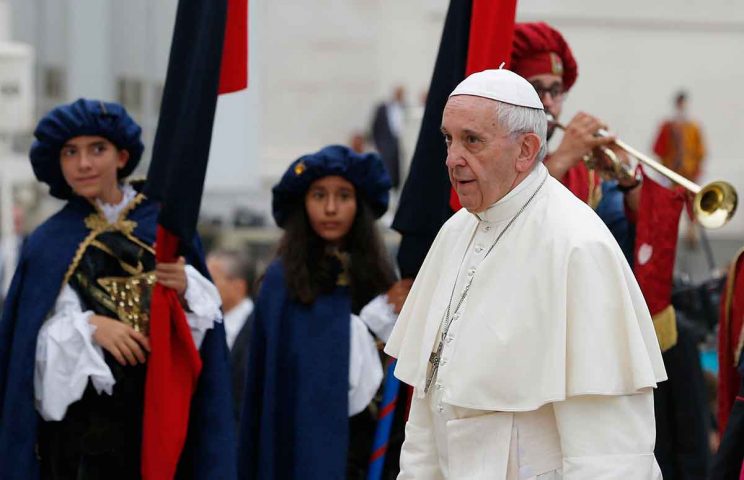 Pope Francis walks past traditional flag twirlers and musicians during his general audience in St. Peter’s Square at the Vatican. (CNS photo/Paul Haring)

Christians are called to detach themselves from power, reject violence and sacrifice themselves for God and others out of love, Pope Francis said.

Christians must live the way Christ chose to: not as “persecutors, but persecuted; not arrogant, but meek; not as snake-oil salesmen, but subservient to the truth; not impostors, but honest,” he said during his weekly general audience.

In fact, “Christians find repugnant the idea that suicide attackers might be called ‘martyrs’ because there is nothing in their purpose that can come close to the behaviour of children of God,” who are called always to act out of love, he told the estimated 12,000 pilgrims in St. Peter’s Square.

High temperatures and scattered sprinkles prompted the pope to tell guests in the Vatican audience hall that he was about to head outside to a “Turkish bath.”

In his weekly catechesis, the pope continued his series on Christian hope by focusing on what gives Christians strength and perseverance in the face of opposition, hatred and persecution.

Jesus dispelled all “mirages of easy success,” the pope said, and he warned his disciples that proclaiming the kingdom of God would come at a high price as “you will be hated by all because of my name.”

“Christians love, but they are not always loved,” the pope said.

Because the world is marked by sin, selfishness, injustice and hostility, he said, it is “normal” that Christians are expected to go against the current and live the way Christ lived and taught.

The Christian lifestyle must be marked by “poverty,” he said, noting how Jesus talks to his disciples more about “stripping” themselves than about “getting dressed.”

“Indeed, a Christian who is not humble and poor, detached from wealth and power and, above all, detached from him- or herself, does not resemble Jesus,” he said.

Christians journey forth into the world with the bare essentials, except their heart, which should be overflowing with love, he added.

In the Gospel of Matthew (10:16-22), Jesus warned his disciples that he was sending them “like sheep in the midst of wolves.” They could be shrewd and prudent, the pope said, but never violent because evil can never be defeated with evil.

That is why Jesus sent his people into the world like himself, as sheep – without sharp teeth, without claws, without weapons – Pope Francis said. In fact, “true defeat” for a Christian is to succumb to the temptation of responding to the world’s resistance and hatred with violence, revenge and evil.

The only weapons Christians possess are the Gospel and the hopeful assurance that God is always by their side, especially in the worst of times.

Persecution, then, doesn’t contradict the Gospel, it is part of its very nature, because if the Lord was hated and persecuted, the pope said, “how can we ever hope that we should be spared this battle?”

Yet, “in the great midst of the maelstrom, Christians must not lose hope, believing they have been abandoned,” he said.

Christians know that in their midst, there is always a divine power greater than all evil, “stronger than the Mafia, murky conspiracies, (stronger) than those who profit off the lives of the desperate, those who crush others with arrogance,” he said.

On the eve of the feast of the martyred Sts. Peter and Paul and just a few hours before he was to create new cardinals whose red robes symbolise martyrdom, Pope Francis underlined the real meaning of martyrdom in his catechesis.

“Martyrs do not live for themselves, they do not fight to assert their own ideas, and they accept having to die only out of fidelity to the Gospel” and with love, which is the highest ideal in Christian life, he said.

This, the pope said, is the strength that animates and sustains people facing so much hardship: knowing that “nothing and no one can separate them from God’s love given to us in Jesus Christ.” By Carol Glatz Catholic News Service

Focus on life, not death Pope Francis encouraged the priests of the Congregation of the Resurrection to model their ministry...