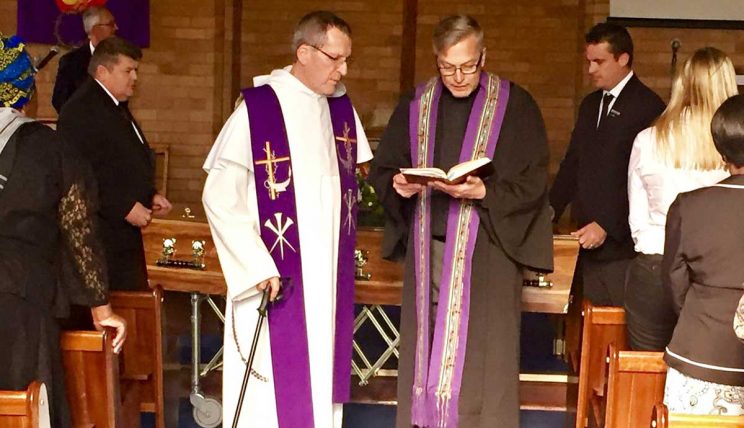 Fr Blaser preached at the funeral of Jean Jones, a loyal listener and supporter of Radio Veritas.

She Never Switched Off

He recalled how five years ago he received a call from Ms Jones who had discovered Radio Veritas by playing around with the dial. “And I haven’t switched it off,” she told Fr Blaser at the time.

“She never tired of reminding me every so often how she had discovered Radio Veritas,” the priest said.

“If she phoned in when she was feeling down, I could hear it in her voice,” Fr Blaser said. “I would then say to my technical assistant Siphiwe, ‘Let’s play her favourite song’, which was ‘Ocean of Mercy’.”

Ms Jones Cheered Everyone Up

Fr Blaser said Ms Jones had a way of cheering him up, too.

“Radio is a very expensive exercise, so I’m always begging for money,” he said.

“When people see me coming they say, ‘There he is coming for money’, but Jean couldn’t understand why they might say that and would always say to me, ‘Father, don’t worry, trust in the Lord and have faith, the Lord is with you’,” Fr Blaser recalled.

“If I have a memory of Jean it is of her ability to encourage people — and her incredible faith,” he said.

She Reminded Me to Have Faith

“Jean gave me the confidence, as a Catholic priest, to have faith and not to give up, because there are times when you do ask yourself ‘What is the point of it all?’ — and then Jean would pop up and remind me to have trust in the Lord — and, indeed, that’s what we should do, have faith in the Lord.”

“I know and believe deeply, that this little old lady, Jean Jones, is where she longed to be: with Jesus praying for us , that we will be faithful to the Lord in everything in our lives.”