Winning with a Rosary in his Hand 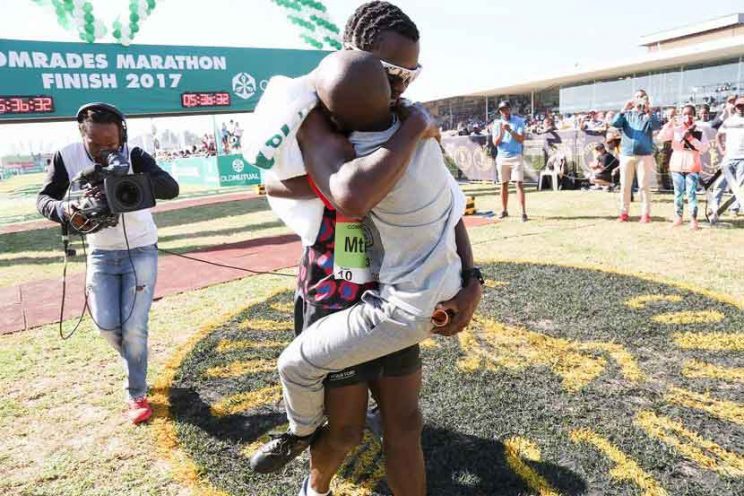 Bongmusa Mthembu celebrates his second Comrades win in June with his son Sisanda. A Catholic, he attributes his success to God’s graces.

South Africa’s leading marathon athlete clutches his white rosary when he runs — as he did when he crossed the finishing line as the winner of this year’s Comrades. ERIN CARELSE spoke to the runner.

Having won his second Comrades title this year, Bongmusa Mthembu is now a South African marathon legend — and he attributes all that to God. ERIN CARELSE spoke to the runner.

South Africa’s leading marathon athlete clutches his white rosary when he runs — as he did when he crossed the finishing line as the winner of this year’s Comrades.

Bongmusa Mthembu, 33, knows that all he has achieved in his career is not because he is talented, but because of the grace of God — and holding the rosary during races serves to remind him of that.

Pray, Run, and Leave the Rest to God

“I always run with my rosary, because I was raised in a Catholic home. I pray before and after my run, and then I leave the rest up to God,” he told The Southern Cross.

After winning this year’s Comrades he made a pilgrimage to the Marian shrine of Kevelaer in Mariannhill diocese to give thanks to Our Lady.

The professional runner, who hails from Bulwer, near Pietermaritzburg, claimed his second title at this year’s Comrades Marathon “up-run” in a time of 5:35:34. With that he became the first South African runner to win two titles since the legendary Bruce Fordyce won his last title in 1990, having won his first title in the “down-run” to Durban in 2014.

The Comrades is the world’s largest and oldest ultramarathon race. First run in 1921, the 90km run is capped at 20000 international competitors.

Only four South Africans have won it more than twice.

This year was especially emotional for Mr Mthembu as his son Sisanda and his family, who had travelled to Pietermaritzburg to surprise him, were waiting for him at the finish line.

Son at the finish line

“Seeing my first-born son Sisanda waiting for me at the finish line was a very emotional moment,” he recalled.

“I was at camp in preparation for the race and I had no idea he would be there. He doesn’t usually come to watch me because he says he feels sorry for me and doesn’t want to see me in pain, but I was so glad to see him there to witness this. I felt it was good for him to see that his father accomplished this win, and hopefully, it was motivational for him,” the runner said.

“I trained very hard for this race, it was on my bucket-list, and I’m happy that I got to do it in front of my family, especially my son.”

Mr Mthembu hopes that this win inspires children, especially from rural and underprivileged areas, to never give up on their dreams. 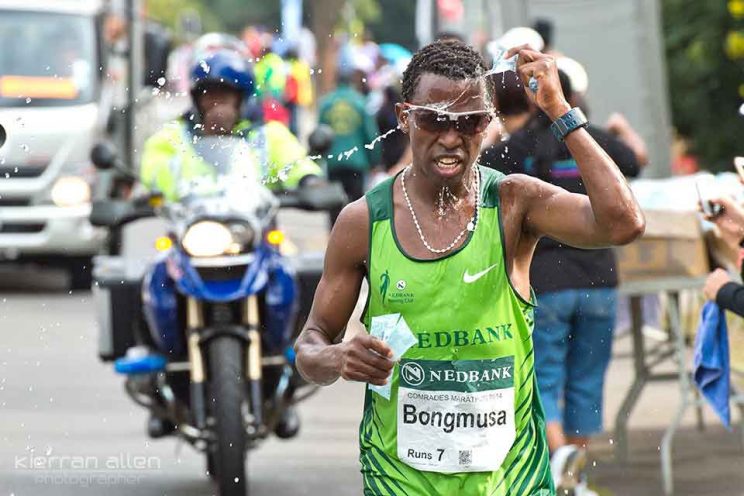 Bongmusa Mthembu is seen wearing his white rosary as he runs in 2014, when he won his first Comrades. (Photo: Kierran Allen)

“I hope that I can inspire children, and show them that it doesn’t matter where you come from, or what you’ve dealt with in your life, those things don’t determine who or what you become,” the athlete said.

“Perseverance, determination and hard work, and being passionate about everything you do, will help you to succeed and achieve your goals. I didn’t let anything stop me.”

Mr Mthembu began his running career at Engudwini Primary School and left the rural village of Bulwer after matriculating at Ndingelwa High School and moved to Pietermaritzburg.

He found it hard to get a job, but eventually worked as a bricklayer.

Throughout this time, he never stopped training and running.

In 2004, he began to enter races and won the Maritzburg Marathon in 2005. He always dreamt that he would one day win the Comrades.

He has to date competed in 12 Comrades marathons and has cemented his place as South Africa’s top ultra-distance runner.

He came third in the Comrades 2010 and second in 2012, and followed in the footsteps of Catholic Claude Moshiywa when he won the 2014 Comrades Marathon. This made him the second Catholic in successive years to win the title.

“I faced some negative comments from the media after the 2014 ‘down–run’, with some speculating that it would difficult for me to compete in the ‘up-run’.  Unbeknown to them, in 2014 I had lost my fiancée Lethiwe Vilakazi, and that despite all of this, I was just happy to be able to finish in 2015,” he said.

Winning this year’s up-run was his answer to the critics.

“I was very proud of myself after I won the “up-run” Comrades because I know where I come from, what I’ve been through, and what I’ve had to overcome — so to see the fruit of my labour was a very humbling moment for me,” he said.

Sucesses Outside of the Comrades

He has also had success outside the Comrades.

Mr Mthembu also broke one of the longest standing national records when he came second at the World 100 Championships in Los Alcazares, Spain, in November 2016.

He completed the ultra-distance race in 6:24:05 to win the silver medal, breaking the South African 100km record set by legend Bruce Fordyce in 1999.

He was only the second South African to finish on the podium, after Cornet Mathomane finished third in 1993.

Mr Mthembu said that many people had helped him in his career: his training partner, team, coach, sponsors Nike. “They have all played a very important role. They’ve contributed in making the Bongmusa you’re speaking to today — and for that I want to thank them.”

And above all, he attributes his remarkable achievements to the grace of God.

The Trick in Answering God’s Call

Twenty years ago a Durban priest took the initiative to provide women in pregnancy crisis with an alternative to abortion....