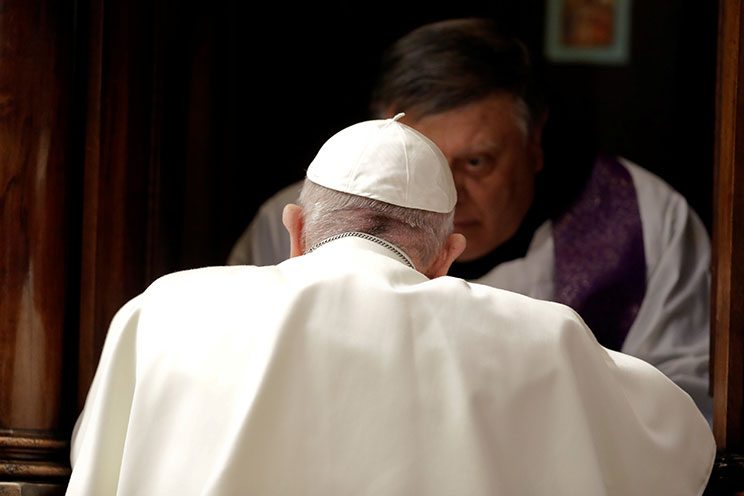 By Junno Arocho Esteves –  Jesus does not view sinners as transgressors who must be punished according to the law, but as people in need of hope and freedom from sin, Pope Francis said.

“It is Jesus who, with the power of the Holy Spirit, frees us from the evil we have within us, from the sin which the law could impede but not remove,” the pope said in his homily during the annual Lenten penance service in St. Peter’s Basilica.

After the homily and several minutes of silent reflection and prayer, the pope removed his liturgical vestments and walked toward one of the wooden confessionals; he kneeled before a priest to confess.

The sound of sacred music, interspersed with moments of scripture reading and quiet reflection, filled the basilica while Pope Francis and dozens of priests and bishops listened to confessions.

In his homily, the pope reflected on the Gospel reading, in which the Pharisees brought a woman accused of adultery and attempted to trap Jesus by asking him whether she should be stoned according to the law of Moses.

“Let the one among you who is without sin be the first to throw a stone at her,” Jesus replied.

Citing St. Augustine, the pope said once those who sought to stone the woman left, only Jesus and the woman remained, “mercy with misery,” because in his eyes, “that woman, that person” was what was of value.

“For him, the sinner comes before the sin,” the pope explained. “I, you, each one of us come first in the heart of God: before mistakes, rules, judgments and our failures.”

However, Christians must keep in mind that, without the love of God, evil cannot be overcome. Thus, the sacrament of reconciliation, the pope said, is the gift that helps “make room for the Lord, who forgives and heals.”

Forgiveness, he continued, “is a new beginning” and not “a photocopy which is identically reproduced in every passage through the confessional.”
“Receiving pardon for our sins through a priest is always a new, distinctive and unique experience,” the pope said. “We pass from being alone with our miseries and accusers, like the woman in the Gospel, to being raised up and encouraged by the Lord, who grants us a new start.”

Without Jesus’ Death and Resurrection, We Remain in our sins

Pope Francis invited Christians to contemplate the image of Jesus crucified on the cross as a reminder that Christ did not point fingers at those who were sinful, but instead stretched out his arms and bore the weight of those sins upon himself.

The heart of the sacrament of reconciliation, he added, is “not the sins we declare, but the divine love we receive, of which we are ever in need.”

“We may still have a doubt: ‘Confessing is useless, I am always committing the same sins,'” the pope said. “The Lord knows us, however; he knows that the interior struggle is difficult, that we are weak and inclined to fall, that we often relapse into doing what is wrong. So, he proposes that we begin to relapse into goodness, into asking for mercy.”