What Mary Pondered at the Cross 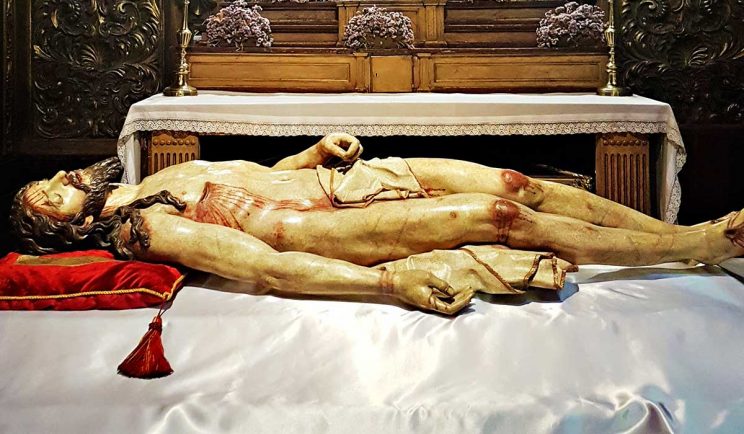 Our Lady holds the Crown of Thorns as her executed Son is entombed, in the church of Our Lady of Carmen and St Louis in Madrid, Spain. (Photo: Günther Simmermacher)

As Mary stood at the foot of the cross, she will have thought of how the prophecies of Scripture led up to this moment, as FR RALPH DE HAHN explains.

We are deeply indebted to the four evangelists for the inspired writings of what they remembered in heart and mind of the extraordinary events in the life of Jesus over those three years of ministry.

During these years, Jesus shocked and astonished thousands on the hillsides, by the lake, in synagogues, and in the very temple of Jerusalem.

All Galilee and Judea resonated with these amazing memories. When Jesus was a small child, the ageing Simeon had foretold that “many secret thoughts would be revealed” (Lk 2:35).

But at the same time, he made a terrible prophecy concerning Mary, his Mother. Echoing the prophet Zechariah (12:10) Simeon told the young mother: “A sword will pierce your own soul.” On Good Friday we see the truth of that prophecy.

Standing for three hours at the foot of the cross of her dying son, surely her memory was awakened by all that he did, and all that was said about him—especially by the early prophets. “Mary treasured all these things and pondered them in her heart” (Lk 2:19).

What she once treasured from the writings of the ancient prophets now came to life. What she now witnessed in these agonising hours had been so clearly spoken by Isaiah (53) Zechariah (12:10) and the prophetic psalms of David (22).

Mary might have cast her mind back to that time when the surprise visit by the Archangel Gabriel fulfilled the prophecy of Isaiah (7:14), when he asked her to be the bride of the Holy Spirit, to be the mother of God’s own son, with a promise of a kingdom “that will have no end”. Indestructible, invincible (Daniel 2:35-45).

The angel said nothing of this ignominious death “as a lamb taken to the slaughter” (as foreshadowed in Leviticus 1:3 and 22:20, and in Deuteronomy 17:1).

How beautiful were those traditional Passover Lamb celebrations recalling Exodus 12 — but this was the ultimate Lamb of God, the unblemished sacrificial victim as foretold by the prophet John the Baptiser: “Behold the lamb of God who will take away the sins of the world” (Jn 1:29).

But Mary also treasured the joyful memories: the call to Bethlehem as spoken by the prophet Micah (ch 5), the manger dwelling in a busy town (Is 1:3), the visit by the shepherds who spoke of the angel’s message. Yes, the prophets spoke of the Great Shepherd (Is 40:11; Ps 23).

Then later, when the crowds began to dwindle, the visit of the Magi, arriving with those prophetic gifts which recalled Isaiah 60:6 and Psalm 72:10. Now she understood! But how did they know?

And what a delightful visit to Elizabeth, who surely wondered how Mary could possibly know that she, who was barren, was now pregnant? And what joy as the yet unborn cousins leaped in his mothers’ womb, and the wonder of the mute father Zechariah giving John his name. How together they magnified the Lord, drawing from 1 Samuel 2:1-10 and Psalm 103:17.

Of course, Mary remembered, John would be the Voice (Is 40:3) and humbly conceded that the Word was made flesh within her…made flesh to die like this!

What of Simeon who had his dream fulfilled as the holy family approached him in the Temple?  Alive with joy he proclaimed Jesus as “the glory of your people Israel” (echoing Isaiah 45:5-7; Deuteronomy 18:15) before he gave Mary that gentle warning.

Before that there already had been the horrible persecution of Herod and their flight into Egypt, which is foreshadowed by Hosea and Jeremiah 31:15. The prophets had spoken in God’s name.

Her son was to face rejection and humiliation. As the Prophet Isaiah predicted, his humility and spiritual power, his authority in confronting the Jewish leadership, his preaching in parables, and his miraculous healings of so many upset his enemies.

Alongside the Sea of Galilee he proclaimed the Blessed to be the poor in spirit, the merciful, the pure in heart, the peacemakers (Is 65).  He was to be the “Prince of Peace” (Is 9:5). This exceptional peace Mary lived with all her life.

Despite the angry outbursts of the enemy, the crowds hailed her son as king, riding on a donkey into the holy city, as foretold by the prophets (Zech 9; Ps 8:2).

How the treasured thoughts and memories warmed her heart as the prophecies met their fulfilment in her dying son!

He preached his equality with the Father, who sent him, and the Spirit of love. How well this mother recalls, that in the synagogue of Nazareth he read from Isaiah 61 and boldly declared the prophecy to be fulfilled in him, the anointed one, that very day!

A new covenant was being born, a new Church — one indestructible — as declared by the Archangel Gabriel and the utterance of Daniel  that her son would reign as the “everlasting King” (Dan 7:14; 2 Sam 7:13; Is 9:6).

Her heart recalled their first public engagement, mother and son. It was at Cana in Galilee. The marriage ceremony needed more wine. She instructed him to do something about it. Strange, he called her “woman”. Her decision was to decide his future days (Lk 1:35).

And again, from that cross, “Woman, behold your son!”

She pondered these words, she needed to understand her mission.

Oh, that beautiful moment — a dying thief, crucified alongside her son, asked to be remembered when he, Jesus, returned to his kingdom — and it was granted him! And his forgiveness went far beyond that, for his fading voice reached out to all her children. “Father,” he cried, “forgive them..for they do not know”, echoing Isaiah 1:18.

The prophecies of old had come to pass; all is now accomplished in her son, the unblemished Lamb of God.

Deep sadness and quiet consolation lingered in the deepest recesses of her heart which now spoke to her of the Father’s will and the powerful voice of his prophets.