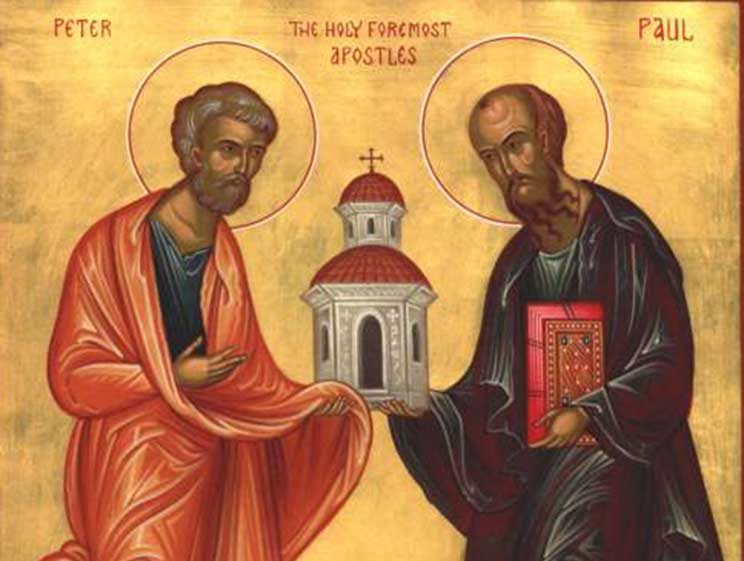 In preparation for the feast of Ss Peter & Paul, FR RALPH DE HAHN asks if the Church today is what Christ had in mind when he entrusted it to Peter.

A  meaningful story comes down to us from the early Church, about the third century, when the prefect of Rome was made aware that the Christians in their religious celebrations were actually using gold and silver vessels for their offerings and golden candlesticks in the evening.

He believed the Christian community, though small, was hiding great treasures.

He charged St Lawrence, a deacon, to bring these treasures to the emperor within three days. At the appointed time Lawrence appeared before the prefect with a disappointing crowd of men and women — the lame, the blind, deaf, some crippled and handicapped, beggars, orphans and widows.

“These,” he proudly proclaimed, “are the treasures of the Church!”

That is exactly the mind of Pope Francis who so clearly declared “I want a Church which is poor and for the poor!”

The Holy Father went on to remind us that not only do the poor share our faith but, in their hardships and difficult lives, they know the sufferings of Christ…they can teach us so much.

We must allow ourselves to be evangelised by them, he insists. At Vatican II, Pope John XXIII asked us to open the windows, let in some fresh air. Now Pope Francis presents an image of an open door as opposed to a Church shut in with false security, while beyond that door the majority of the world’s population is crying and dying for the bread that falls from the rich man’s table.

The Father Creator has provided enough for all his children on the earth. But the distribution of wealth and land is deplorable; there is such an increasing lack of compassion and justice; the powerful feed upon the powerless.

Francis decries the wastefulness in our modern society. With Jesus he begs the wealthy to acknowledge that what riches they possess are not merited, but given them only to share with those who cannot repay. (Lk 14:14).

He calls for an open door and open hearts. Psalm 62:9 clearly states that “great men are only an illusion, and placed on the scales they rise”.

St John Chrysostom writes: “Not to share one’s wealth with the very poor is to steal from them and to take away from them their livelihood.”

Pope Francis has said that there is an inseparable bond between our Catholic faith and the poor. He prefers a Church that is bruised, dirty and hurting to one that is clothed in scarlet, purple and rich garments; he wants a Church with a passionate missionary heart, aware of our human limitations, to be weak with the weak, to be everything to everybody (cf 1 Cor 9:22). And he is fearless despite this “weakness” because “my grace is sufficient for you, for my power is at its best in weakness…so let me glory in my weakness so that the Power of Christ may show itself in me” (2 Cor 12:10).

Humility is power! Poverty is power! Pope Francis is prepared to take risks, to bring about a reformation within the Body of Christ we call the Church.

To be the kind of Church envisaged by Jesus himself: “I have come not to be served, but to serve”

He came to us poor to enrich us with his poverty (2 Cor 8:9-10). He was born in a borrowed stable and died on a wooden bed, was buried in a borrowed grave.

No Church without Cross

We are so wrong if we envisage a Christian Church with a beautiful spiritual Christ, without flesh and without his cross, says Pope Francis.

We are being challenged by the suffering poor of the world. The poor should be at the very centre of our ministry; we will be evangelised by the poor. His Gospel of the poor must permeate all levels of our society otherwise we will most certainly lose sight of his Church.

Look again at the Invitation parable to the Heavenly Banquet (Mt 22 or Lk 14). Since those who have so much and are so busy reject his invitation: “Go out quickly to the street and alleys of the city and bring in the poor, the cripples, the blind and the lame…so that my house may be full.”

That is not the voice of the “prosperity gospel” being preached today, for that is the church of the mighty rich. It preaches that by faith alone a believer is enriched and blessed by God while the poor and the sick are punished for their lack of faith and are not loved by the Father.

The prosperity gospel is a total reversal of the teaching of Jesus and certainly not in accord with the words of sacred scripture, which clearly speak to those who hoard up great wealth on this earth, “they have had their reward” (Mt 6:2).

The Catholic Church, although itself wounded, is here to serve the poor and the wounded, or else it cannot be Christ’s Church.

The treasures of this earth belong to all God’s children; but those many millions born in places of fewer resources and utter poverty should not be allowed to lose their dignity.

Isaiah 58 already maps out the basic function of the Church, and the Books of Psalms and Proverbs loudly support him.

Then we have the warning of the apostle James: “Whoever acts without mercy will be judged without mercy”(2:12). And there is Peter’s assurance that if you persevere in love for the poor, that “ love covers a multitude of sins” (1 Pet 4:8).

The disciple John speaks from reason, saying: “If a man rich enough in this world’s good saw a brother in need, and closed his heart to him, how could the love of God be in that man! “(1 Jn 3:17).

That is a shattering truth! There is a worldly spirituality, hiding behind a false piety and so-called “love for the “Church”, that aims  only to feed one’s own human glory, certainly not God’s (Jn 5:44; Phil 2:21).

But the spirituality of the poor is so very different. How will a rich and powerful Church ever understand?

The disciple John makes it very clear that when a serious crisis hits the Church, when the anti-Christ acts within the Christian community, it is the believing poor who remain faithful — but “those of our own number who have left us had never ever really belonged”(1 John 2:18-19)

“Blessed are the poor in spirit for theirs is the kingdom of heaven”; blessed are you who are abused, and persecuted, and have absolutely nothing to offer Rejoice and be glad, for the reward is very great in heaven (Mt 5).

Pope Francis has begun the reformation within the Church. It is just the beginning. The Holy Spirit is at work.

Christ is Gone to Set Up a Place for Us

Why the Sacred Heart of Jesus Matters

Why Pentecost Was a Shattering Event