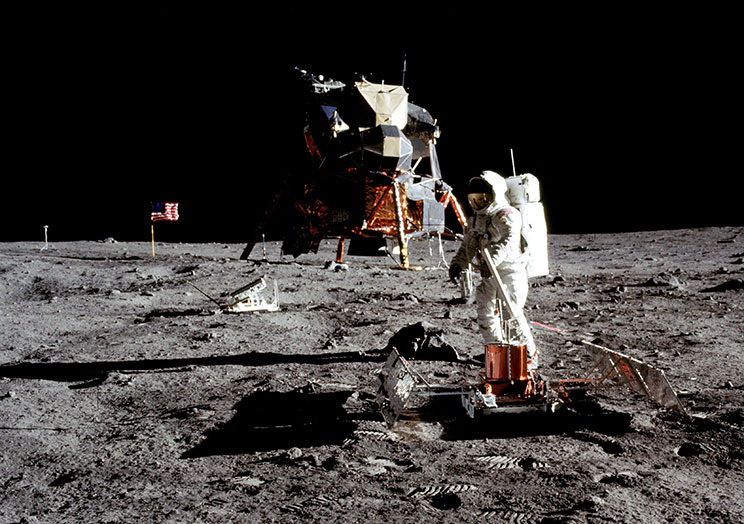 If you were at least 10-years-old on July 20, 1969, you will surely remember that your eyes were glued to a black and white television set watching what no eyes had ever seen before.

You will remember, as I do, the excitement of seeing on screen animation of a lunar module steadily descending toward a first ever human moon landing, together with voices from Mission Control in Houston communicating with the lunar module crew, and all topped off with narration from the legendary American newscaster Walter Cronkite .

But what viewers around the world didn’t know was that lunar module astronauts Neil Armstrong and Buzz Aldrin were in trouble. As they approached the moon’s surfaced they discovered that they were off course from their preprogrammed landing site and headed toward a field of boulders and craters. Commander Armstrong took over the controls and flew the lunar module – named “Eagle” – manually in search for an open level spot.

With fuel diminishing quickly Armstrong sited his spot. The descent engine was then fired up, but it kicked up so much lunar dust that visibility became extremely poor. Armstrong had to use a few boulders piercing through the dust cloud to estimate the distance from the moon’s surface.

Shortly after Mission Control’s warning that they had just 30 seconds of fuel remaining, Neil Armstrong calmly uttered these famous words: “Houston, Tranquility Base here. The Eagle has landed.”

But the excitement didn’t stop there. Read on at Space.com .

Space and space exploration is fascinating; especially since it easily helps us to see our awesome God reflected in his awesome creation!

And so, while I am hopeful that humankind will seriously pursue travel out into the cosmos, I am hoping far more importantly that all of us will urgently commit ourselves first to cleaning up and protecting our common home – planet Earth!

Pope Francis in the first ever papal environmental encyclical (“Laudato Si’: On Care of our Common Home”) writes , “Each year hundreds of millions of tons of waste are generated, much of it non-biodegradable, highly toxic and radioactive, from homes and businesses, from construction and demolition sites, from clinical, electronic and industrial sources. The earth, our home, is beginning to look more and more like an immense pile of filth”.

The Holy Father added, “A very solid scientific consensus indicates that we are presently witnessing a disturbing warming of the climatic system” .

“The problem is aggravated by a model of development based on the intensive use of fossil fuels” – that is coal, oil and gas.

The pope urgently calls for global conversion from the use of these fossil fuels to “clean renewable energy” – wind, solar and geothermal .

Pope Francis urges, “Today, however, we have to realise that a true ecological approach always becomes a social approach; it must integrate questions of justice in debates on the environment, so as to hear both the cry of the earth and the cry of the poor.”

In 1961, U.S. President John F. Kennedy successfully challenged America to “commit itself to achieving the goal, before this decade is out [the 60s], of landing a man on the moon and returning him safely to earth.”

Now let’s do something far greater. Let’s work and pray to achieve by the end of the coming decade the full hearing and healing of “the cry of the earth and the cry of the poor”