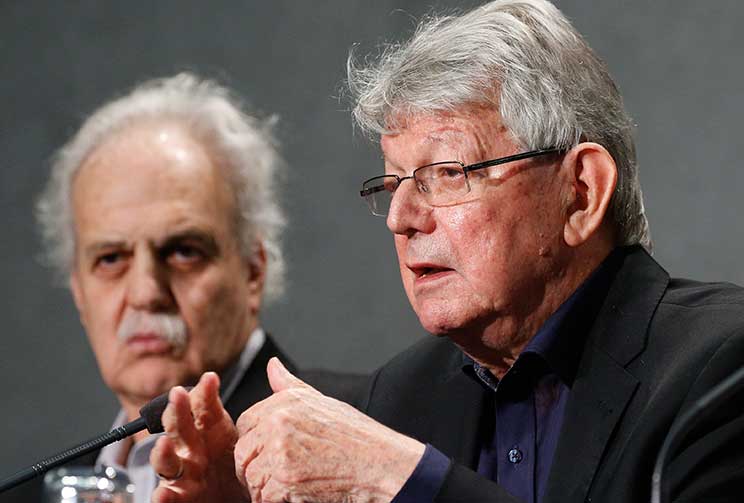 Retired Bishop Erwin Krautler of Xingu, Brazil, speak at a press briefing following a session of the Synod of Bishops for the Amazon at the Vatican. Also pictured is scientist Carlos Alfonso Nobre, winner of the Nobel Peace Prize in 2007. (CNS photo/Paul Haring)

Most bishops who lead dioceses in the Amazon support the ordination of married men of proven virtue, or “viri probati,” as a way of addressing the lack of priests in the region, a Brazilian bishop said.

Speaking to journalists after a Vatican press briefing , retired Bishop Erwin Krautler of Xingu said, “I guess that (of) the bishops who are in the Amazon region, two-thirds are in favour of the ‘viri probati.'”

Several bishops and other speakers at the Synod of Bishops for the Amazon proposed the ordination of married men, preferably elders in their respective communities, as a solution for remote communities that often go from one month to up to one year without the celebration of the Eucharist.

During the synod’s morning session, the Vatican said, several bishops proposed the ordination of married “viri probati,” and at least one suggested the church could “evaluate over time whether this experience is valid or not.”

At the briefing, Bishop Krautler said that when it comes to ordaining married men of proven virtue, “there is no other option.”

“The indigenous people don’t understand celibacy; they say that very openly and I see it,” the bishop said. “When I go to an indigenous village, the first thing they ask is, ‘Where is your wife?’ And I tell them, ‘I don’t have one.’ Then they look at me with pity.”

Bishop Krautler added that there are thousands of indigenous communities in the Amazon that “do not celebrate the Eucharist except perhaps one, two or three times a year.”

“The Eucharist, for us Catholics, is the source and summit of our faith. And these poor people are practically excluded from the context of the Catholic Church,” he said.

“St. John Paul II said the church doesn’t exist unless it is around the altar,” Bishop Krautler continued. “For the love of God, these people don’t have it!”

Bishop Krautler told journalists after the briefing that while he wasn’t sure how many bishops supported the proposal, he believed “many of the bishops are in favor of the ordination of female deacons.”

When a journalist asked if this proposal was part of a push for the ordination of women as priests, Bishop Krautler asked rhetorically: “Why are women (not able) to be ordained? Why?”

Asked directly whether he supported the ordination of women as priests, he responded, “Yes. Logically.” However, he began his response before the question was finished; it was unclear if he heard the entire question.

When pressed as to whether the synod would lead to ordaining women, Bishop Krautler said, “No.” However, he added, the synod “may be a step” in that direction.